After the juvenile was unable to find and retrieve the water bottle from part 2, she dredged up an old, beat-up bamboo fishing pole from the water. 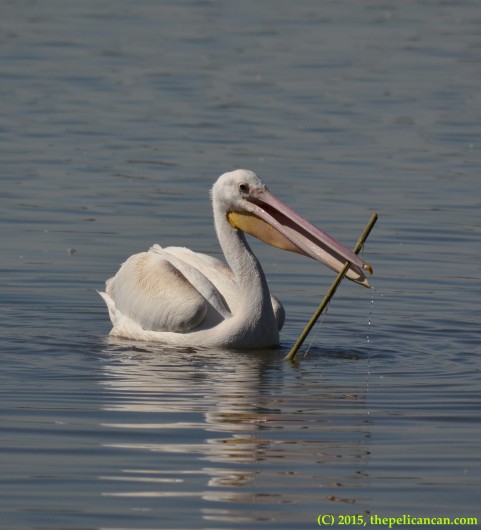 Humans use this to catch fish?! Why don’t they just use their pouches? Stupid humans! 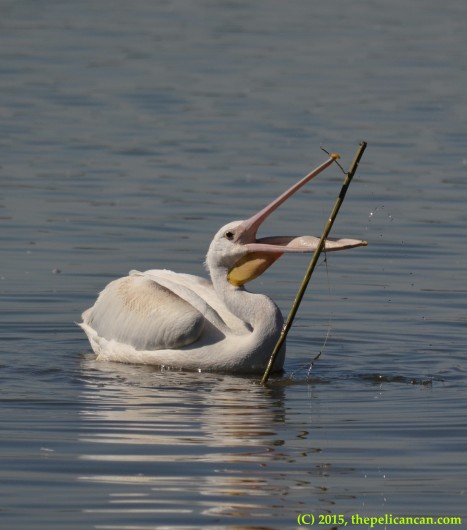 Although I try to watch what all of the pelicans are doing, I pay attention to some situations more than others. A pelican swimming or walking toward shore is one such situation. Not only might the pelican suddenly decide to run or fly, which is great, but I might be able to see a band. If a pelican is banded with a large, colorful band, like the kind used for North Dakota pelicans from Chase Lake, I can photograph the alphanumeric code as the bird is lifting its leg out of the water to walk. 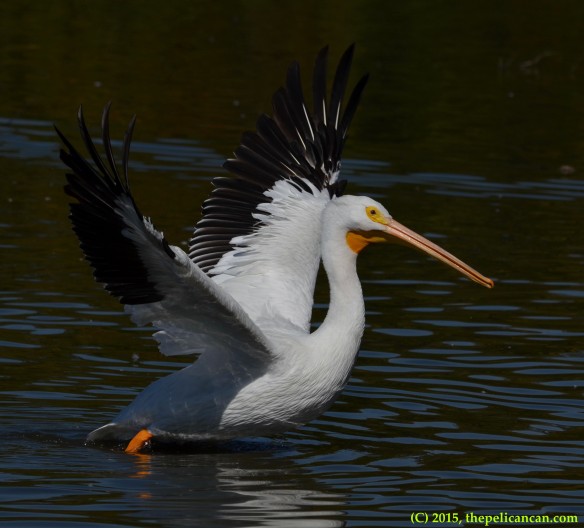 Show off your internal pouch structures, little pelican! Show them off like . . . well, like a lesson in avian biology, I suppose.

There was some exciting bathing action going on nearby. 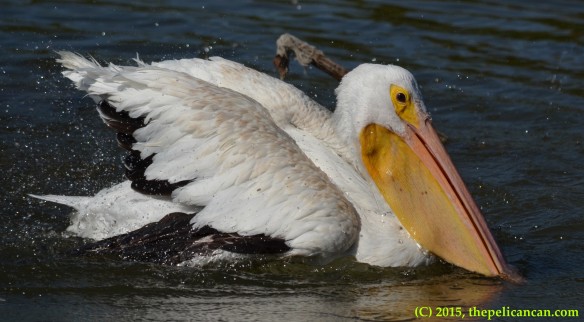 THOSE HUMANS CAN SEE ME NAKED!

I love all the water splashing as the pelican really gets going. 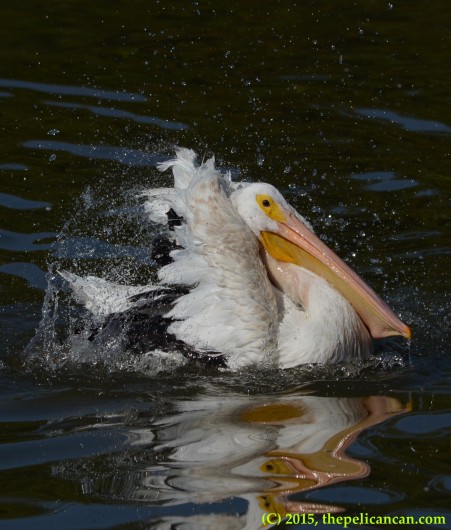 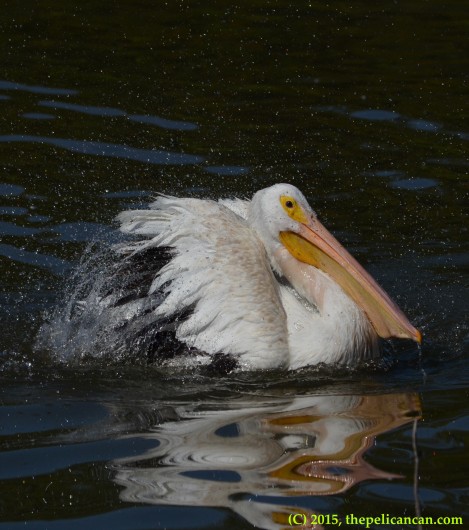 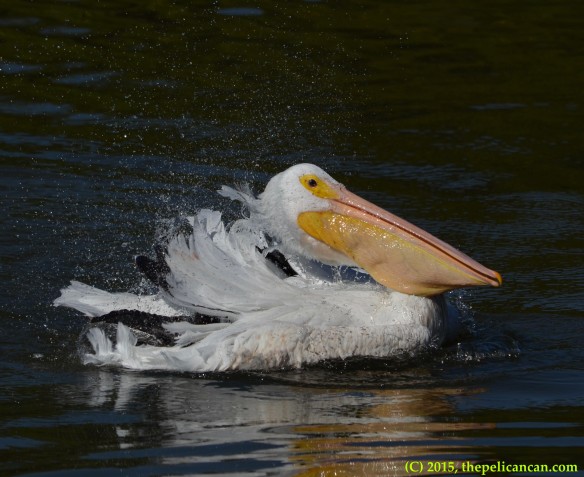 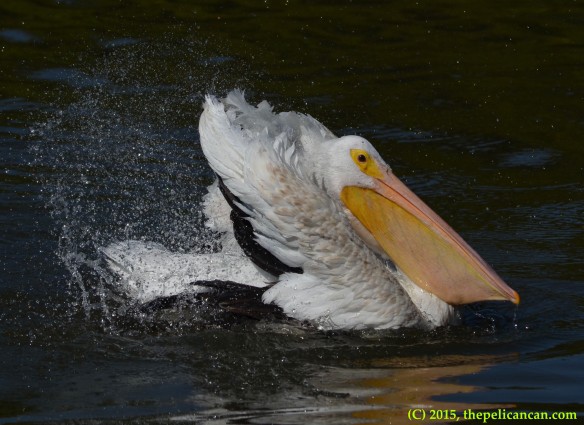 The pelican who played with the mangled red plastic cup in part 1 found the plastic container that another pelican in part 1 had grappled with. 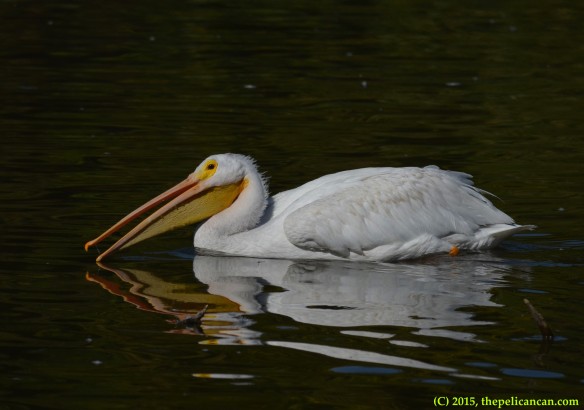 But, soft! What crap through yonder whitecaps breaks? 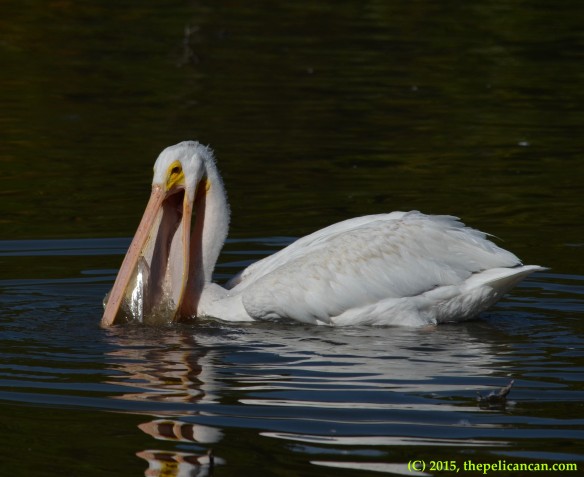 It is the trash, AND IT IS FOR ME TO PLAY WITH. FUCK JULIET.

Another pelican—a different one, I think, than the one with the plastic container—found a rock to play with.

Every birdie wants a rock to wind a piece of string around. 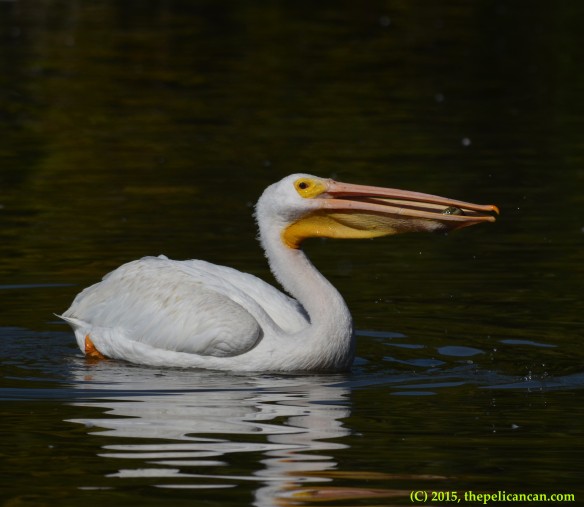 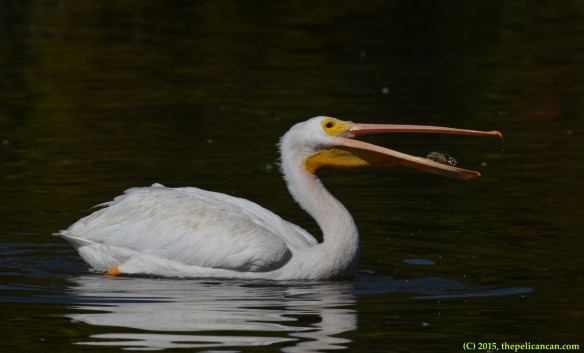 Can I balance it in my pouch while I swim? 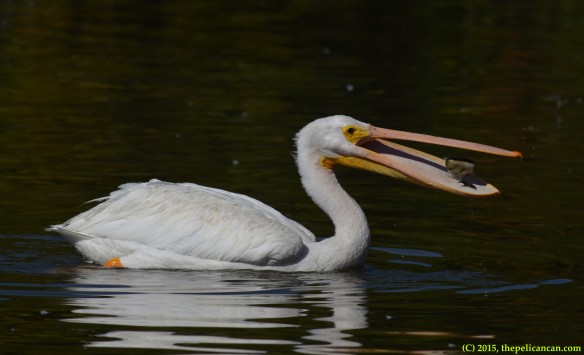 Some pelicans were tuckered out. 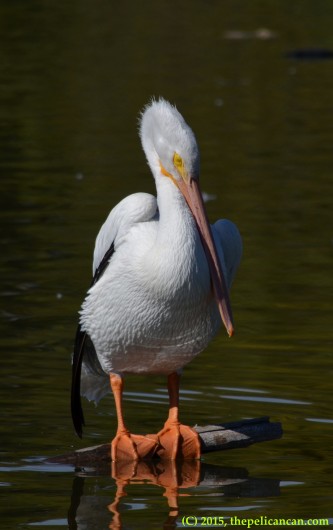 Another pelican waddled to shore, but instead of stepping up onto land, she got back into the water and swam around in the very shallow water. She kept dipping her head in the water as though she were hunting for fish and brought up a stick. Although it was a large stick, she was able to toss and catch it a few times. She found a few more sticks to play with before she finally settled down to loafing on land. 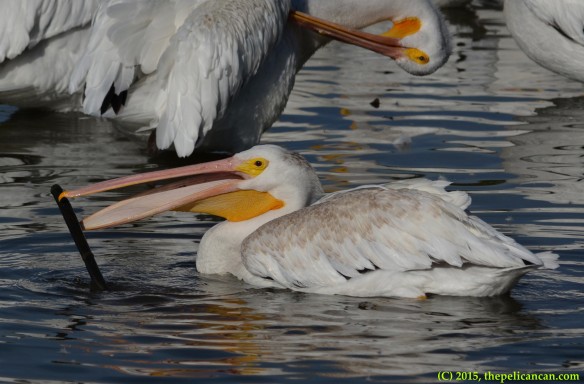 On the shore, Philoctetes managed to get to her feet and limp further in toward the dock. Where pelicans choose to sleep has to do with where the already-sleeping pelicans are. Being very social birds, pelicans like to stand together and sleep together. On this day, most of the birds were moving closer to the dock to find a place to sleep. 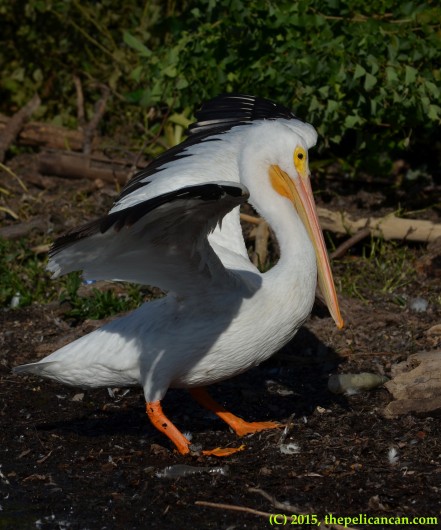 Although birds kept moving onto the shore to loaf, there was still some activity out in the water. 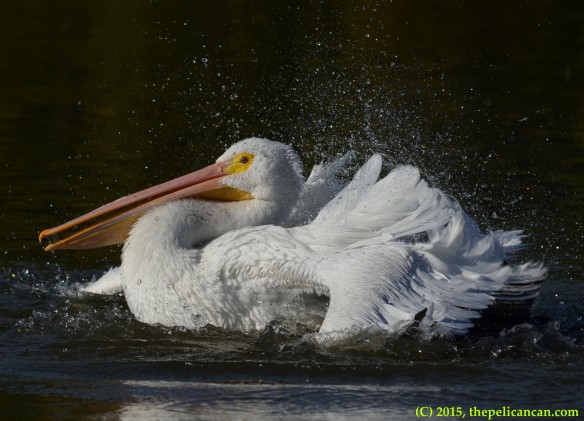 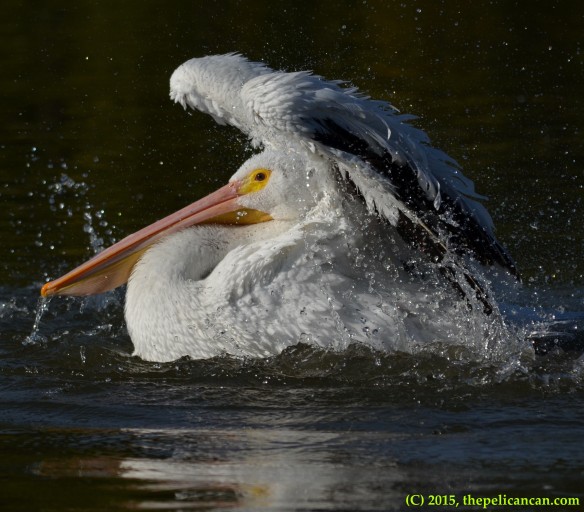 One bird rushed toward the shore. 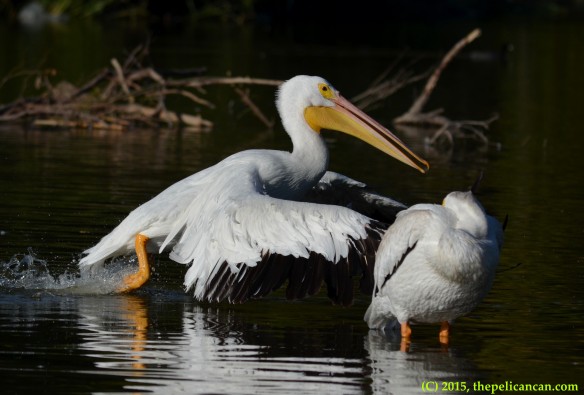 OMG I LEFT THE IRON ON!

Another bird was content to do her loafing in the water.

She looks like a cartoon of a fat, prosperous man who has just finished eating an enormous dinner, pushed back from the table, and loosened his pants to accommodate his swollen gut while groaning in relief and satisfaction.

More pelicans were settling down on the shore. Although the pelicans would have liked the loafing grounds to themselves, they had to negotiate with the other birds who also used the area.

I always think of the yellow-brown coloration on a sexually mature pelican’s lower neck as a “puke bib.” 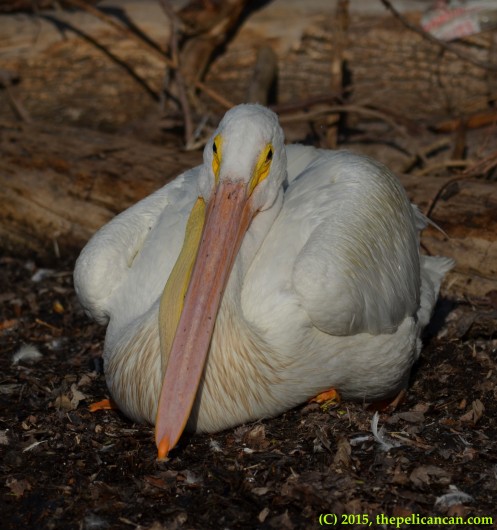 God, I feel sorry for the people who have to band baby pelicans and brave the birds puking on them. Can you imagine the smell?

Another pelican joined the pelican that was lying down. That’s how they decide where to sleep: they find a sleeping bird, walk over to it, and sit down next to it. 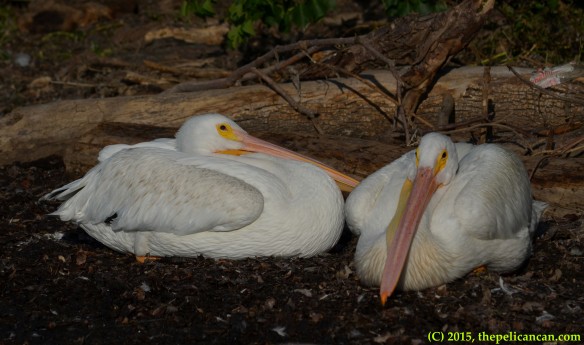 Philoctetes had been sitting on the ground, engaging in some play activity: she was picking of beakfuls of leaf litter and dropping the litter so that it sifted back down to the ground. Before I left for the day, she stood up and performed a nice bill throw. 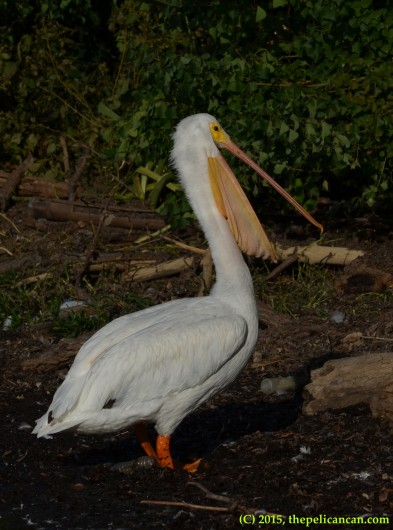 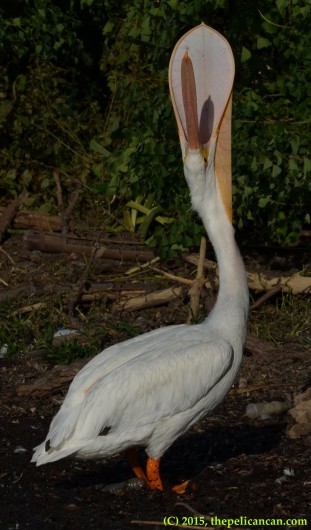 Except I don’t know you other than the fact that you’re one of those scary stinky mammals hovering on the dock! But goodbye anyway!