The most play that I’ve seen among the White Rock Lake pelicans occurs during times of unrest and shifting population. Migration creates those circumstances. Lots of new birds come in to rest and recharge at a new place. There are no established social rankings compared to what an individual might find when stopping off at the lake during deep winter, when there is a fairly stable core of birds. Best of all, there is a lot of new stuff to explore! Last winter and early spring, the majority of the play I saw was among specific birds who were part of the stable winter population. I was very surprised when instances of play started racking up as birds came through on their way further south this fall.

In the following pics, the pelicans were out near the far-away logs. When I notice play, I try to document what is happening; I’m not trying to get super-awesome pics. A blurry pic can still tell me how many birds are involved, what the bird’s beak is doing, where the object is, etc. For the water bottle madness, I tried to pick out the least objectionable of the pictures I had. Extreme blurriness, however, is still the fault of the template, and clicking on the pic will give you a sharper version.

First I noticed that the pelican who had been tossing pecans in the air in part 1 had found an old water bottle. The entire time she was playing with the bottle, a juvenile was trailing after her.

The adult had been swimming with the bottle inside of her pouch. She plunged her head underwater, allowing her pouch to fill with water, and repositioned the bottle so that she could grasp it with her beak.

Why might she want to grasp with bottle with her beak? So she could play catch! 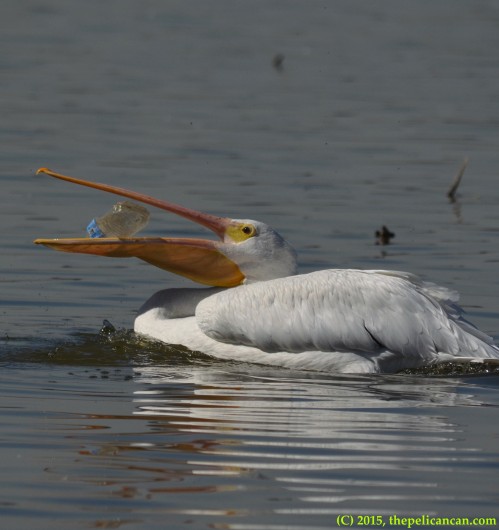 So what if the bottle didn’t really go up in the air? It still counts that I tossed and caught it!

Balancing this thing in my beak is hard!

While the adult was playing with the bottle, the juvenile, who had been following her, darted forward and snatched up the bottle before the adult could get to it. By this time, a third pelican, another adult, had become intrigued with the water bottle play. Both adults chased after the juvenile, but she managed to hang onto the water bottle long enough to toss it into the air a couple of times, swim to where it dropped, pick it up, and toss it again. 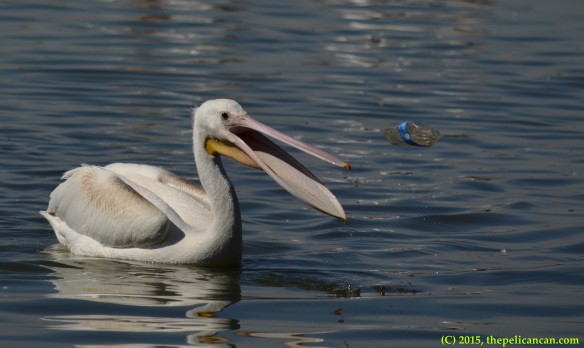 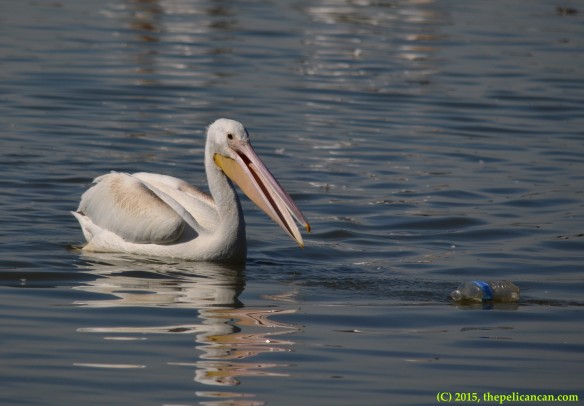 I WILL RESCUE YOU, FAIREST WATER BOTTLE!

But alas, it was not meant to be. For the third pelican sailed forward and snatched up the water bottle before the juvenile could retrieve it. 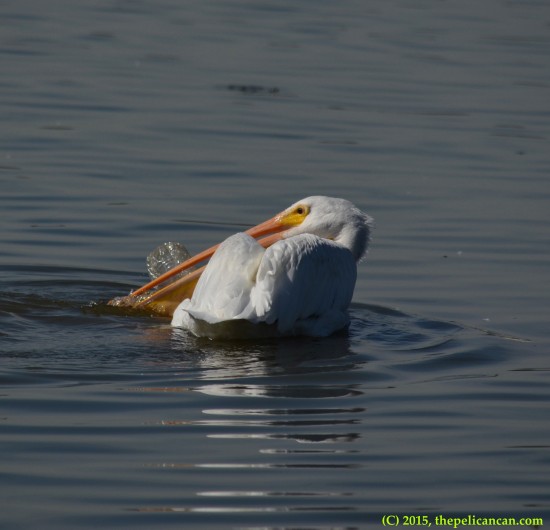 DOES THIS MEAN I AM THE VILLAIN IN THIS STORY? I AM TOTES A NICE PELICAN, SWEAR.

Hey, this is pretty fun! 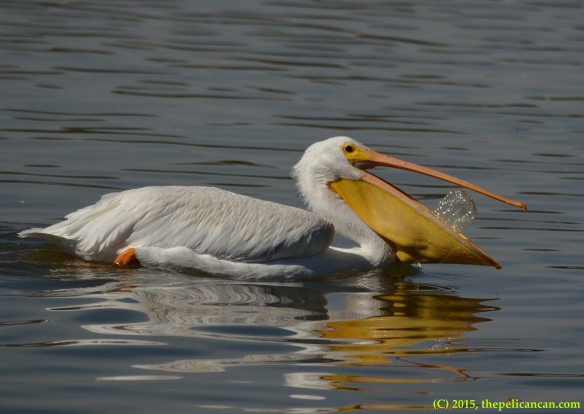 I WILL TAKE THE WATER BOTTLE AWAY WITH ME IN MY POUCH, AND Y’ALL WILL NEVER GET IT BACK! BWA HA HA HA HA!

Luckily for the first two pelicans, the third pelican dropped the bottle in the water after swimming with it in her pouch. She batted it around with her beak for a little while, trying to pick it up, then lost interest and swam away. The juvenile was more attentive than the remaining adult and managed to grab the bottle first. She resumed tossing it about. 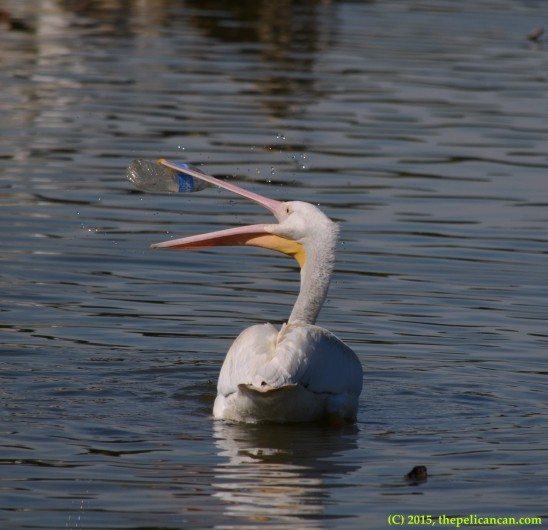 Wherever we go, everyone knows, it’s me and my bottle.

OH NO OH NO THIS CANNOT BE NO NO NO! 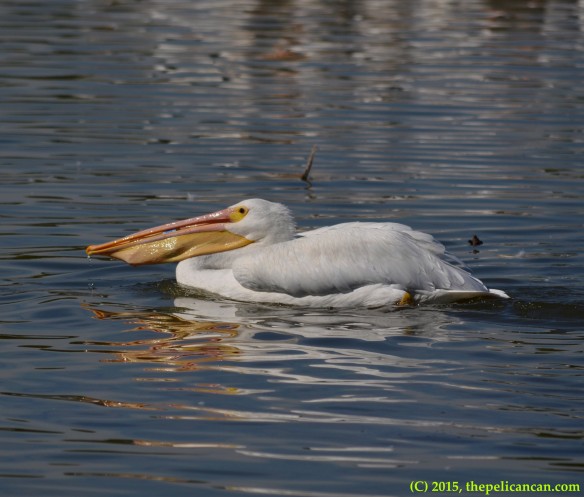 You had it for a long time, juvenile! Let me have it for a little while longer! 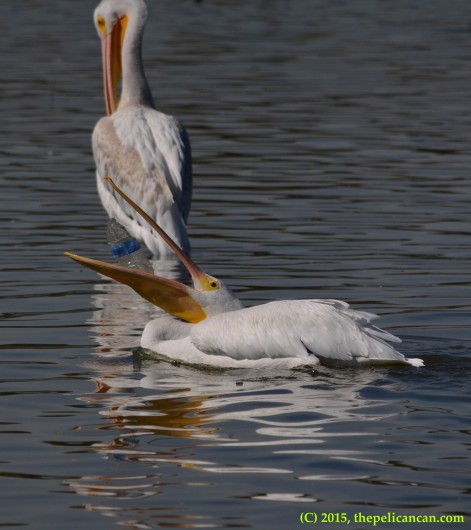 Toss, toss, toss the bottle. Toss it ’cause it’s mine. 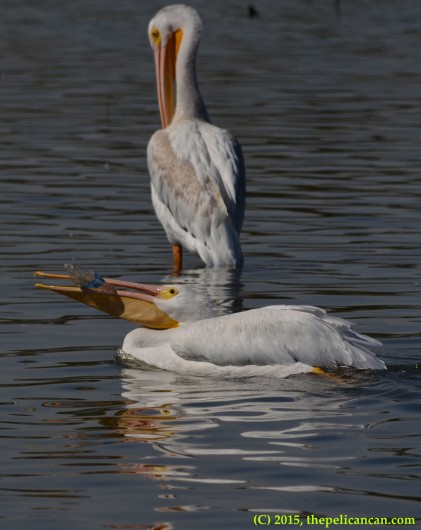 Catch, catch, catch the bottle. Catch it all the time.

The adult tossed and caught the bottle in her beak several times. On the last toss, the bottle landed in the water. After a brief squabble between the pelicans, the juvenile picked up the bottle, and the adult swam away. 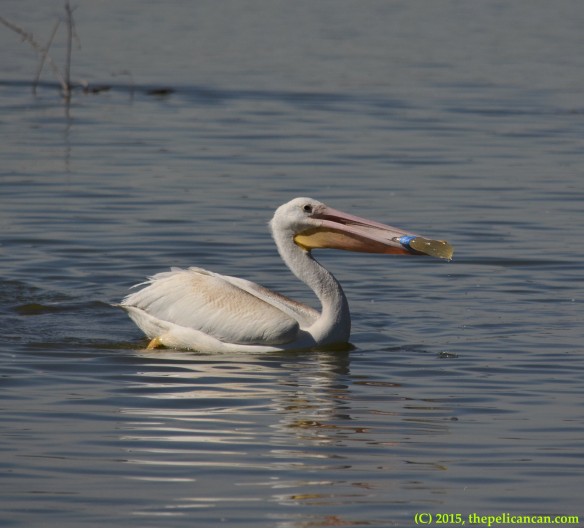 Finally, it is mine, all mine! 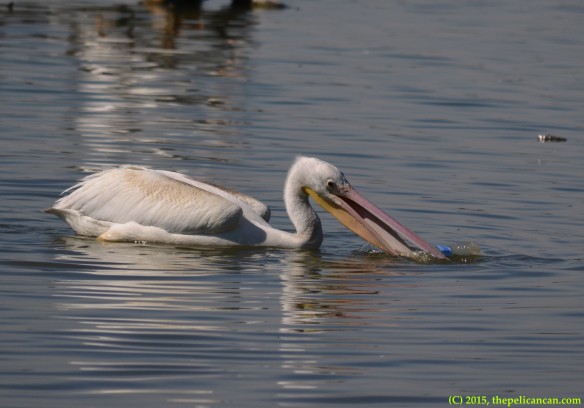 Mine to retrieve after I’ve tossed it in the water.

The juvenile tossed and retrieved the bottle several times. 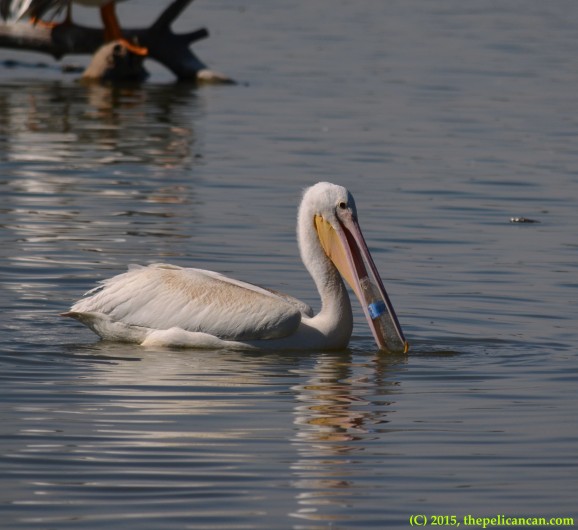 She is just about to fling the bottle in the air.

After throwing the bottle, she swims forward to pick it back up again.

Then she seemed to play with it by gripping it, manipulating it with her beak, and dropping it back in the water. 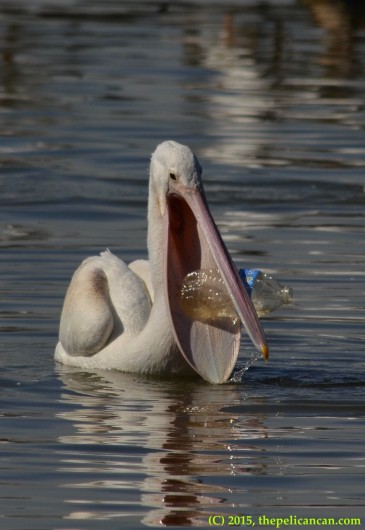 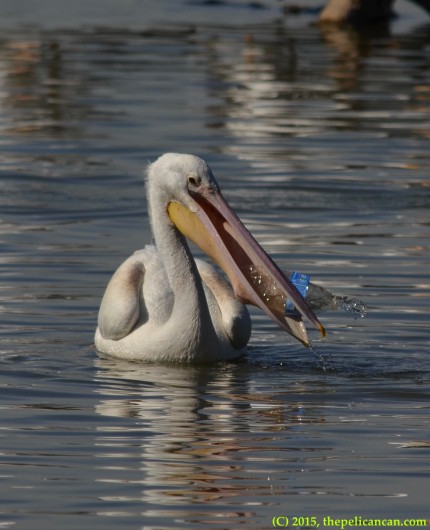 Hello, my name is PELICAN, and I will be your server today. Allow me to pour your water. See? No problem. PELICAN pours so well. 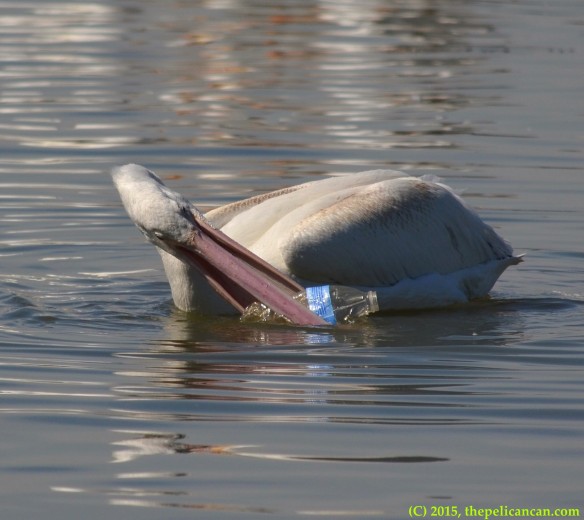 Oh! Water bottle is so slippery! No worries; PELICAN will pour you more water very soon.

She continued playing with the water bottle for a little longer until she seemed to misplace the bottle and swam away when she couldn’t find it. The entire incident lasted six-and-a-half minutes.