When I first went out to watch the pelicans, they were pretty chill. Several pelicans were sitting and standing on the Shore Log. Some were grooming; some were trying to sleep. None of them looked like they wanted to start a fight or go exploring. 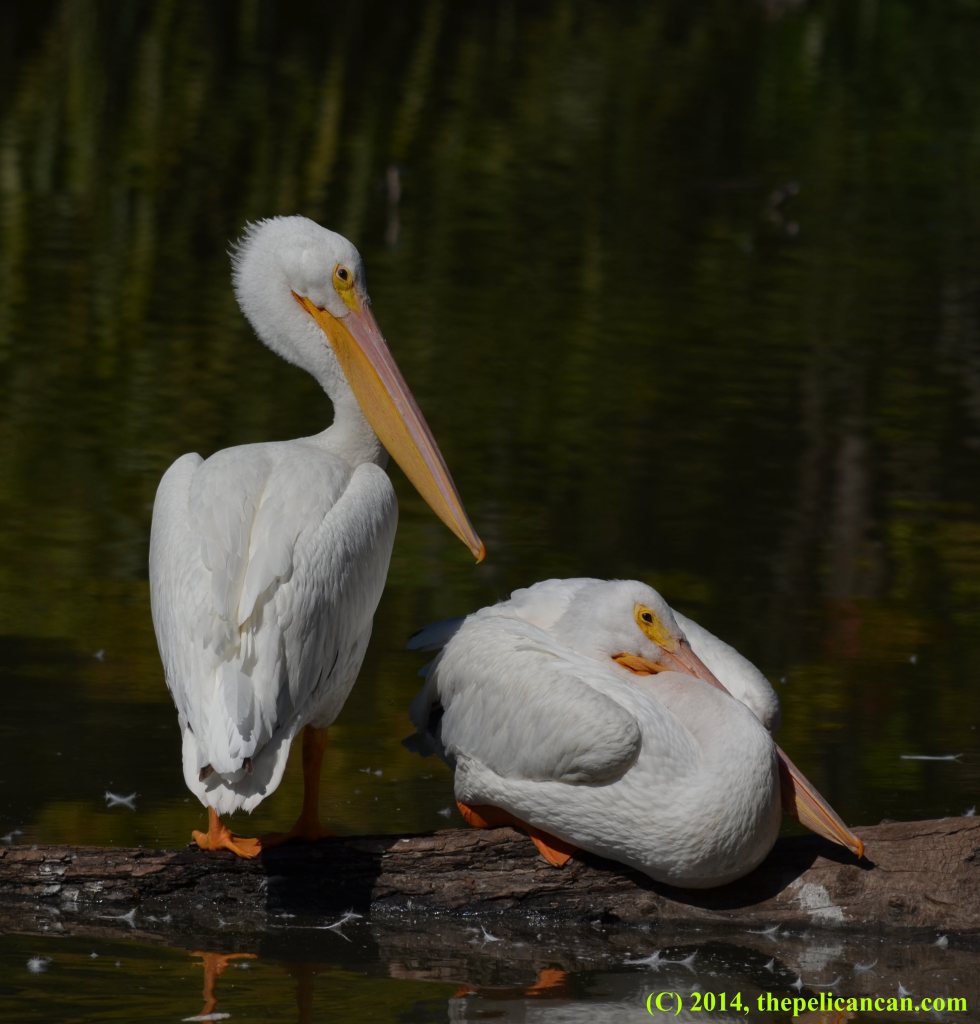 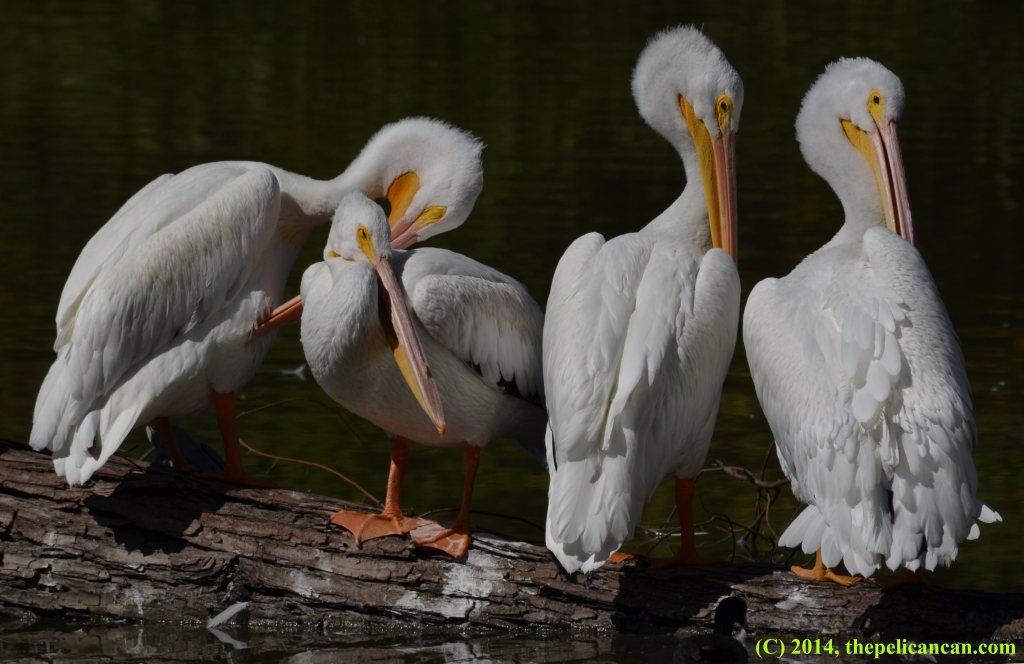 Can someone order out for sushi?

I went to the dock to see if there was any action there. 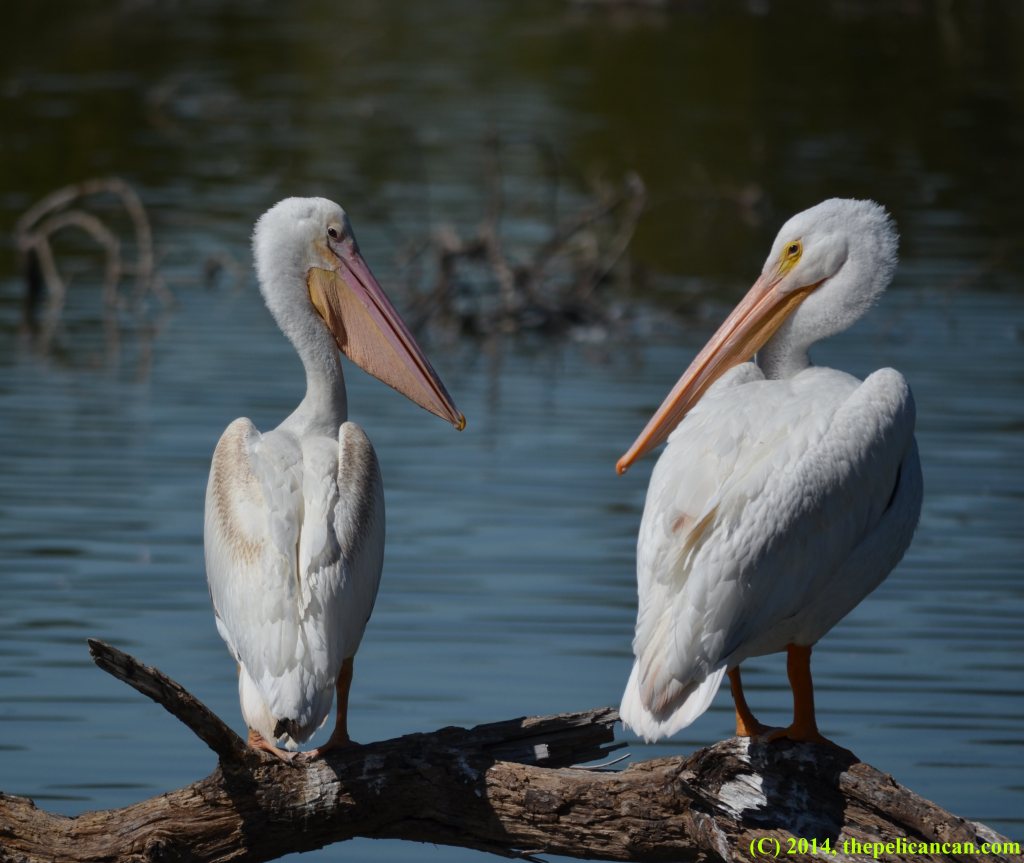 What is this “action” of which you speak?

A juvenile was out in the water playing with a feather. She bounced it in her pouch before dropping it and picking it up a few times. 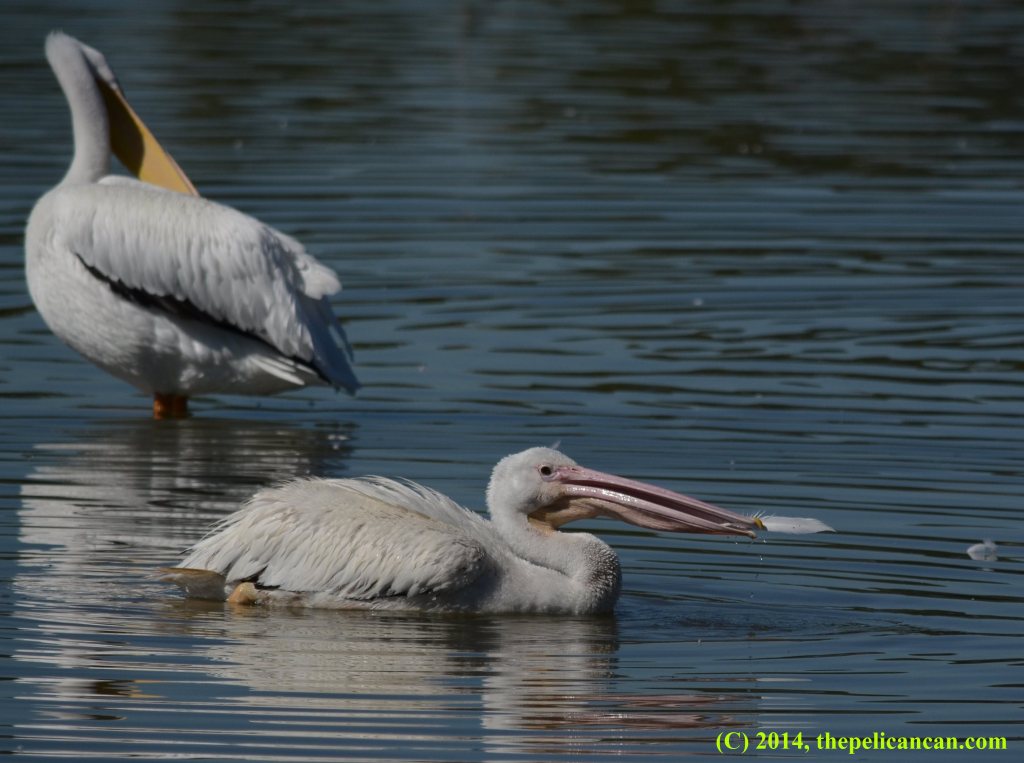 No pelicans were loitering around the Queen of the Log log, and the Queen who was there was busy grooming. 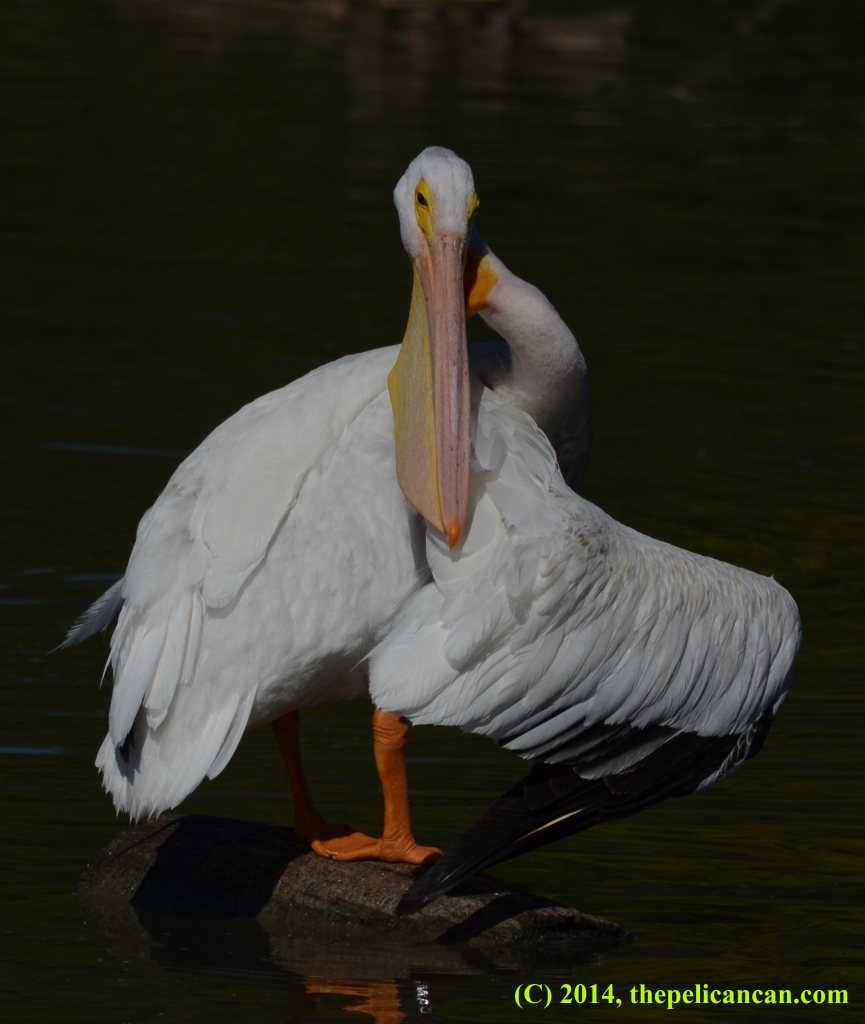 I watched a pelican swimming by, hoping that she might try to jump on a log or do something interesting. She didn’t. 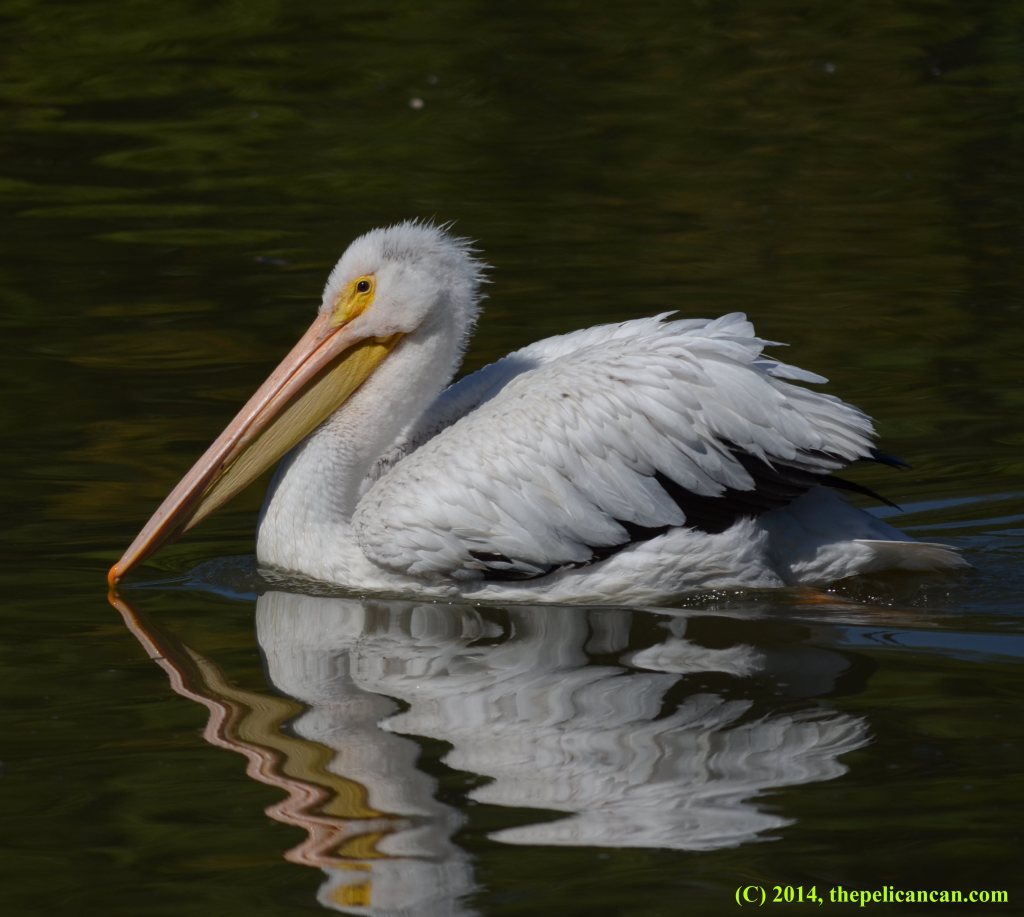 At least the pigeon that landed on the dock was pretty. 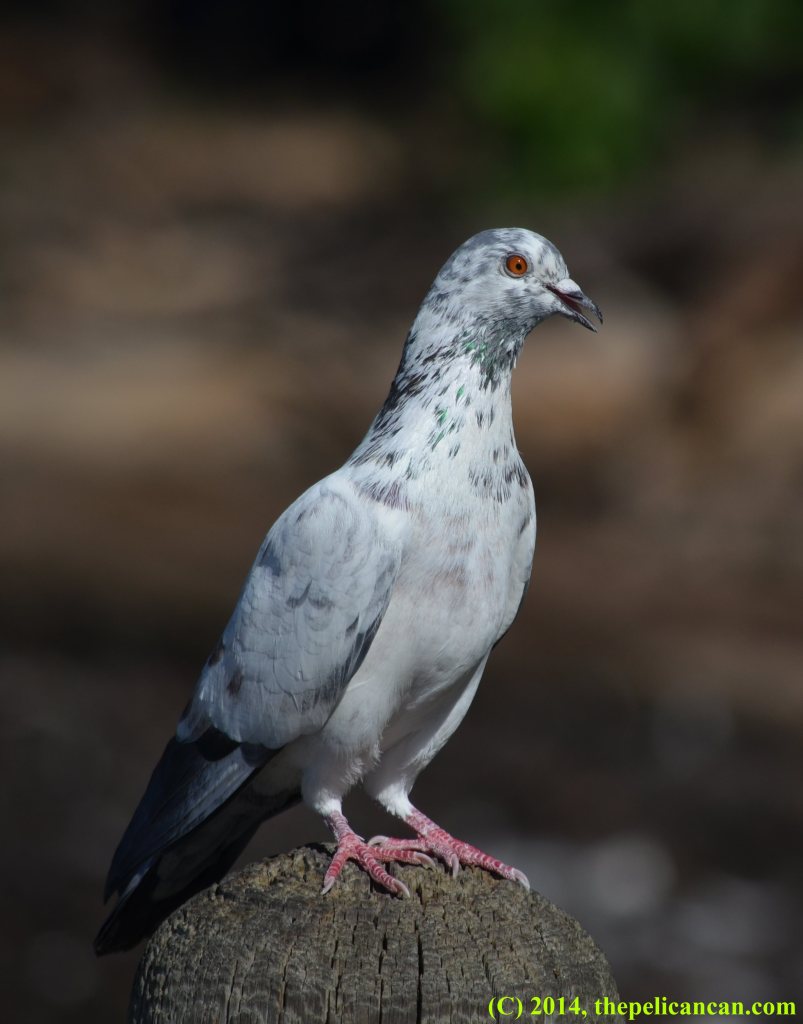 I noticed a commotion out past the Queen of the Log log. Four pelicans had suddenly drawn together. At first I thought they were playing—a few of them seemed to duck down as though they were trying to pick something up out of the water—but they didn’t seem to be moving in such a way that I associate with object play. Then I saw a flash of green. A fish! 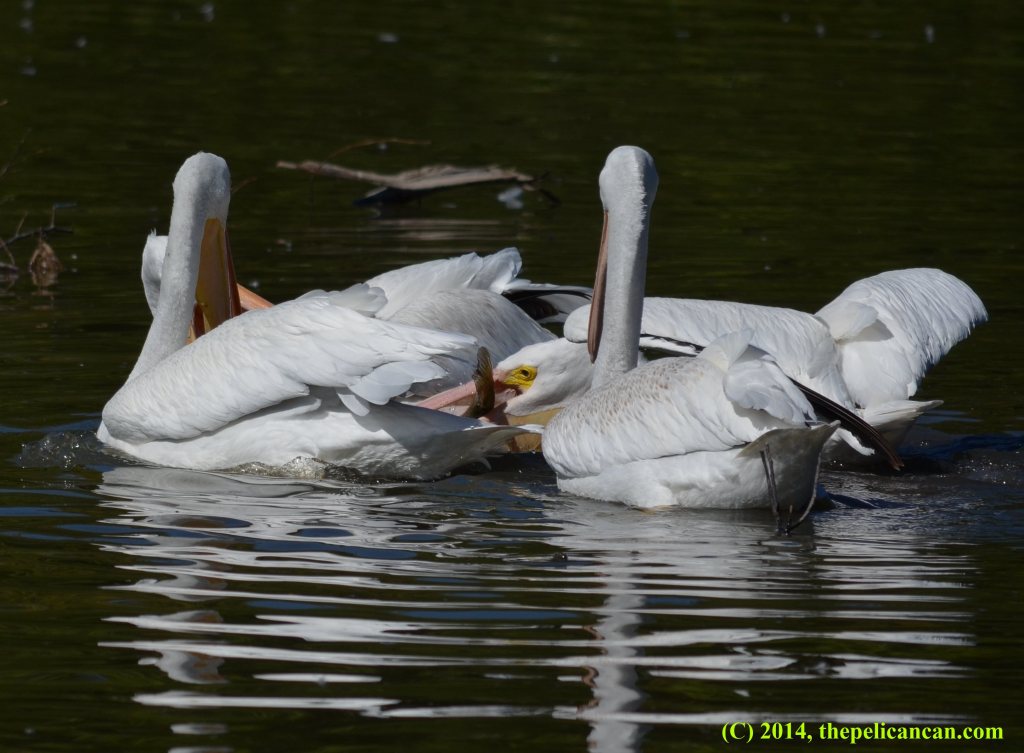 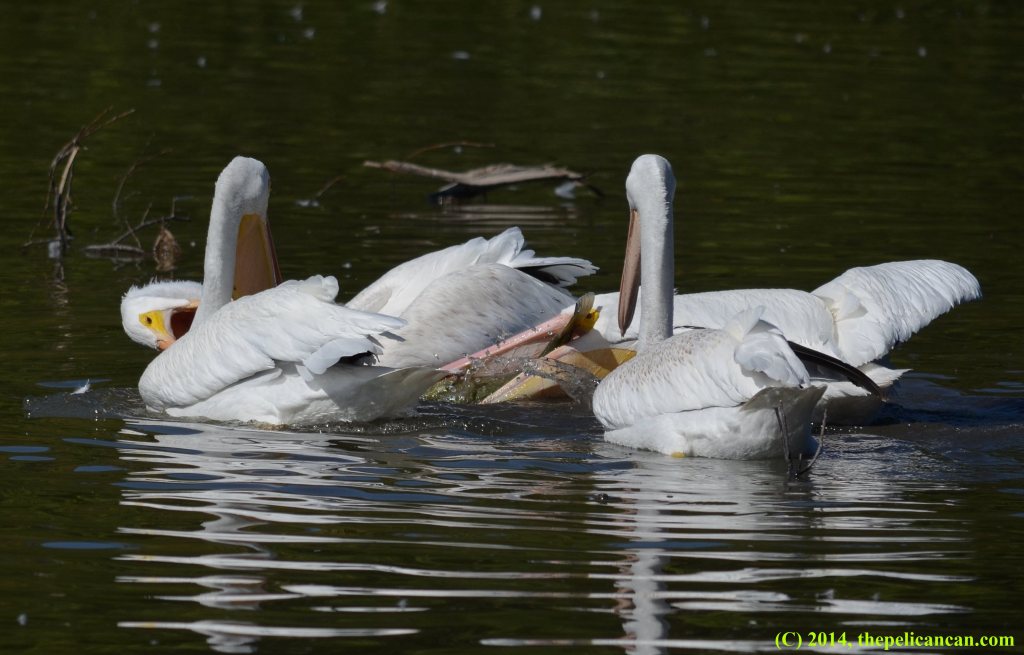 I wasn’t sure whether the pelican who initially had the fish managed to retain it or if another pelican snatched it away. 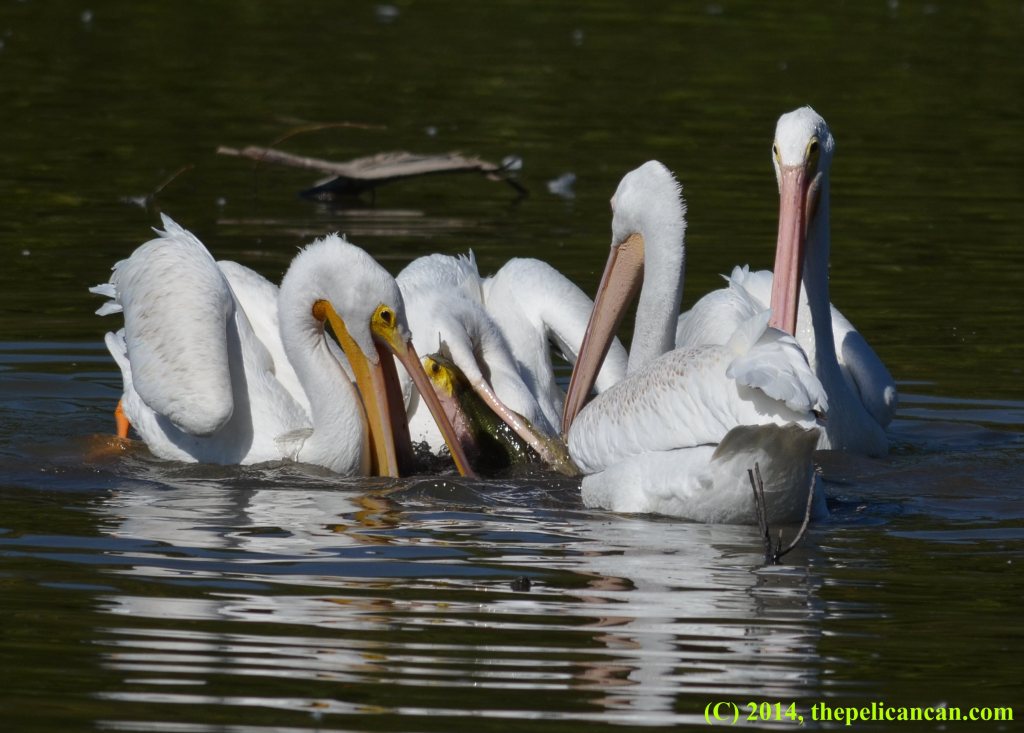 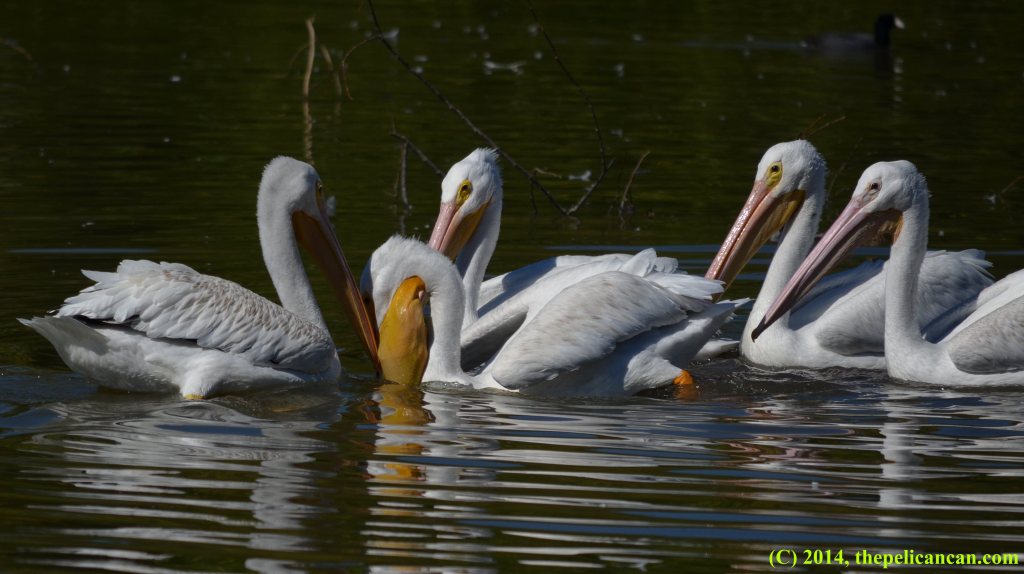 I did not get the next pic in focus, but I wanted to post it to show the outline of the fish inside the pelican’s pouch. 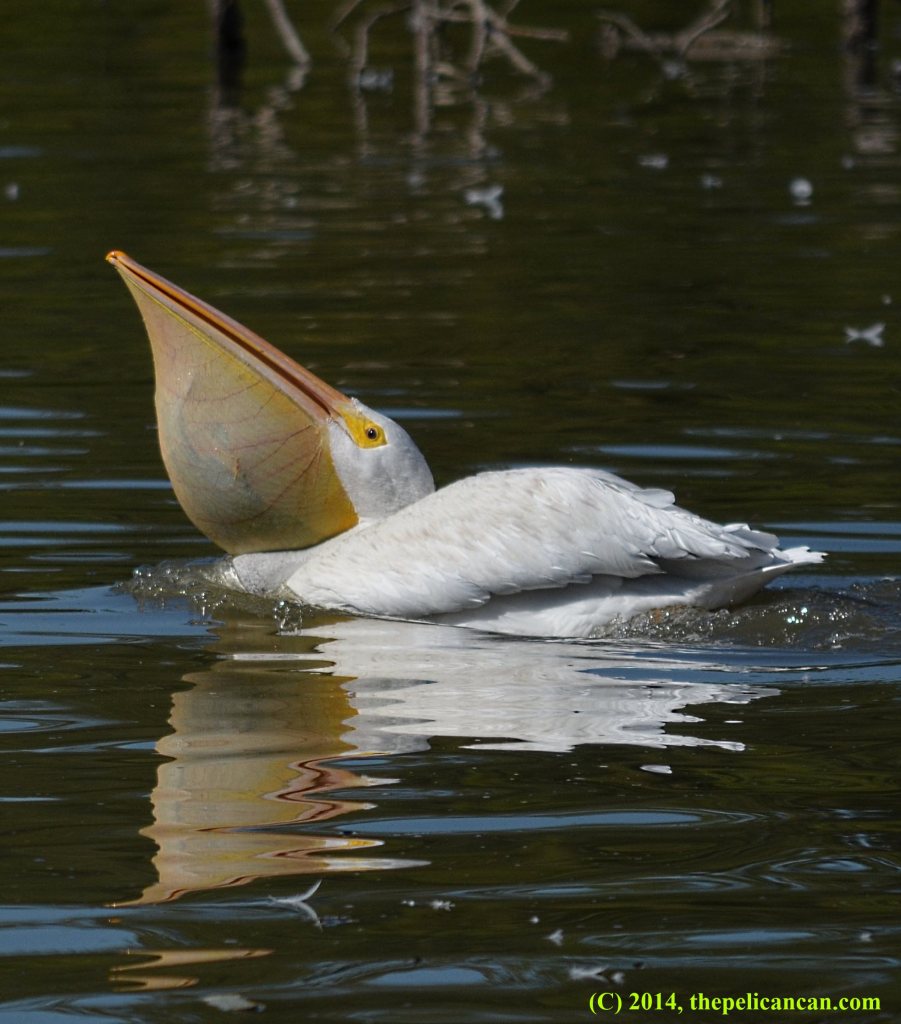 Slosh, slosh, slosh your fish, gently in your pouch . . .

Just as I had seen when a pelican ate a dead fish, the bird swam off on her own, away from where the other groups of pelicans were congregating, and tilted her head back as she drifted away. 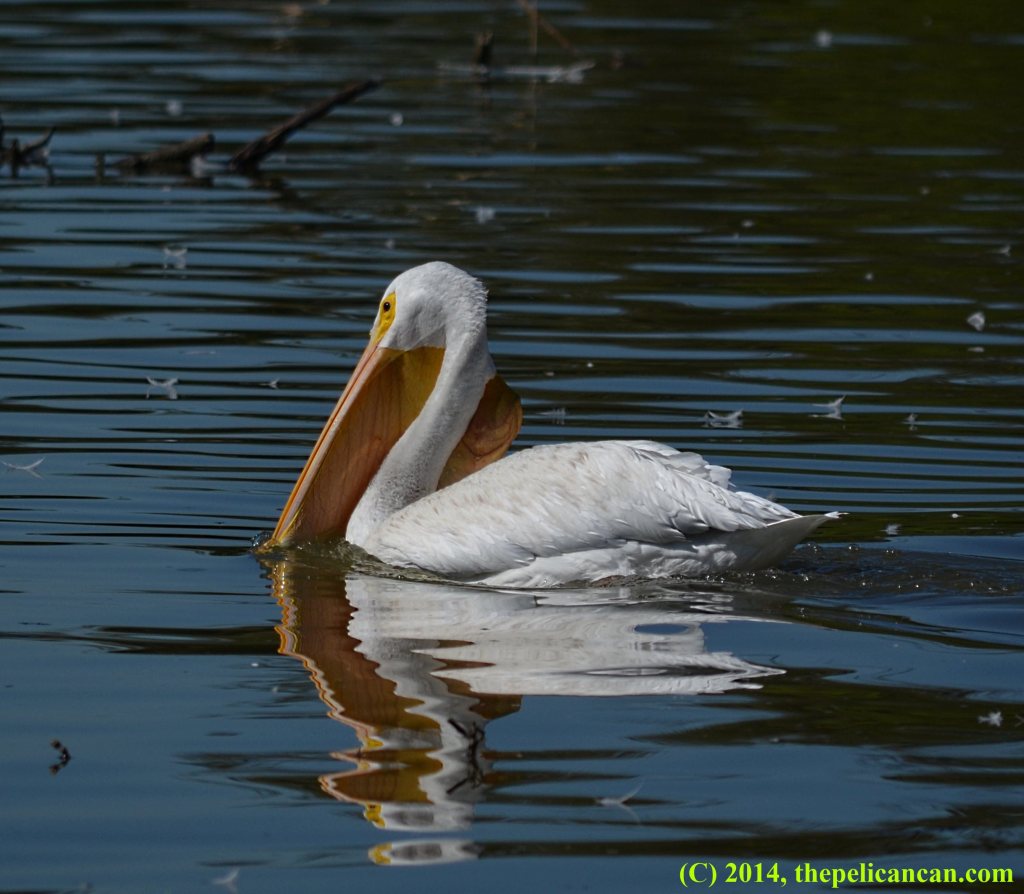 She looks like she has a horrible tumor growing in her pouch. 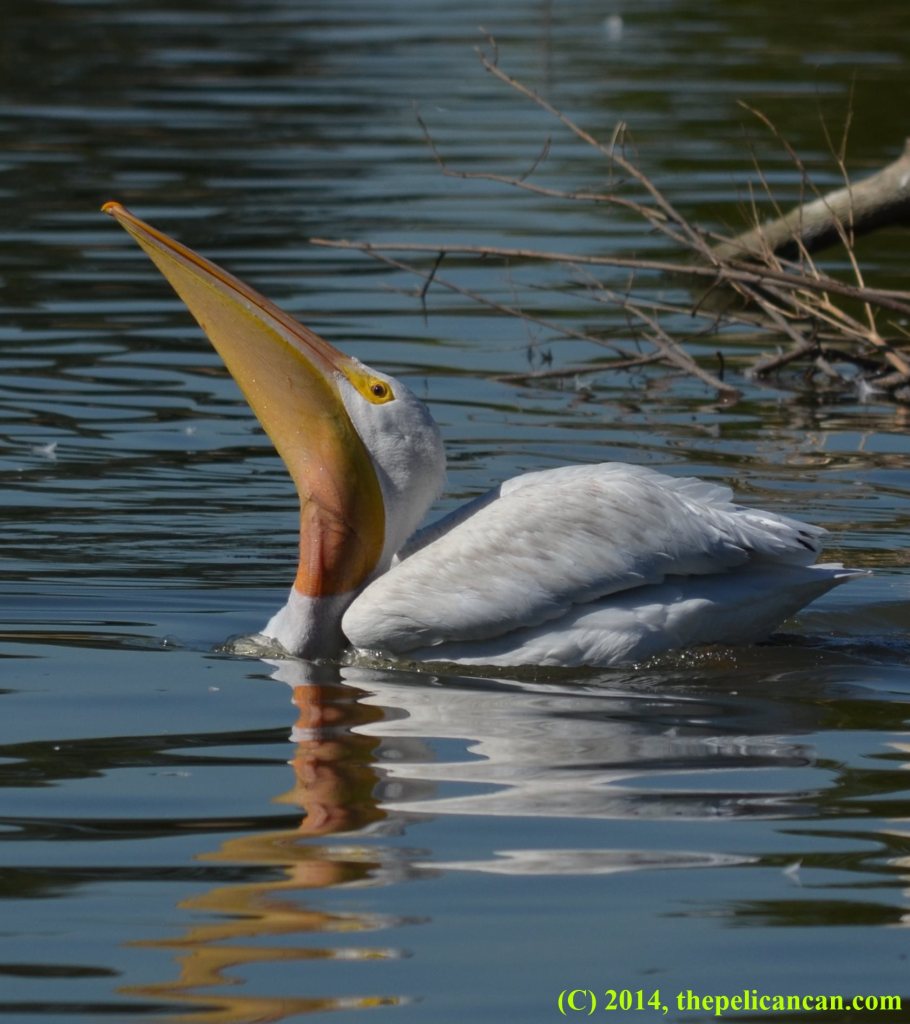 That’s not an angle you often see on a pelican!

Closer to the dock, a group of coots were milling about. One cute little coot was hanging around with her wing held out jauntily. 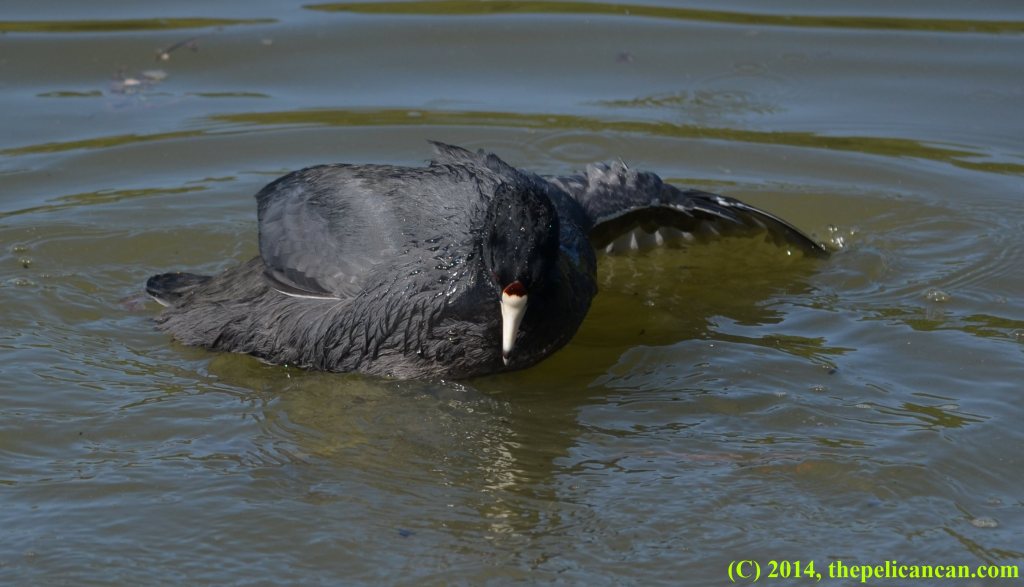 Except that cute little coot with the jaunty wing was a red-hot killing machine. She was in that posture for a purpose: TO DROWN ANOTHER COOT. 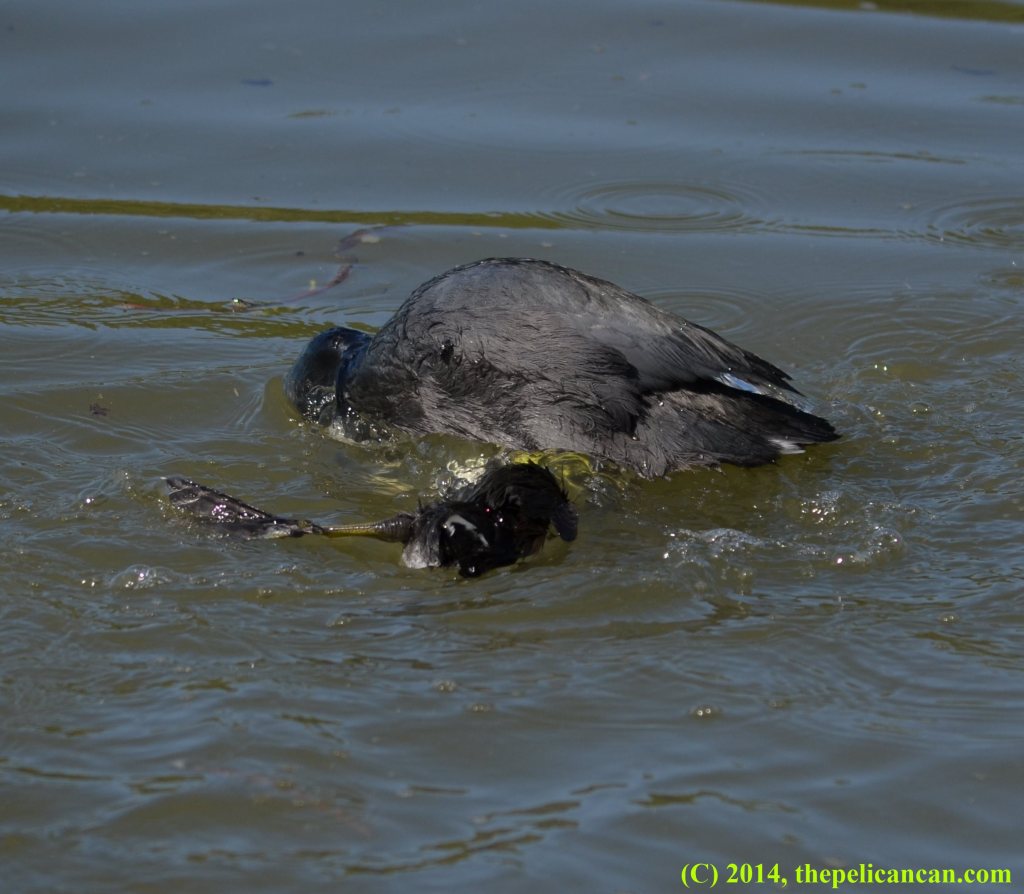 Goddammit, why are we coots so fucking buoyant?

I starting noticing aggressive behavior among coots starting a few weeks before this incident. Some coots would swim with their necks held out stiffly and as close to the water as possible, as though they were pissed-off geese, and as they swam they would hold their hindquarters and wings slightly elevated so one could easily see the white feathers on their rumps. Occasionally the aggressive coots would charge toward another coot, who would quickly swim away, and a few times I briefly saw an aggressive coot fighting an opponent by kicking at them. Attempted drowning was new for me. 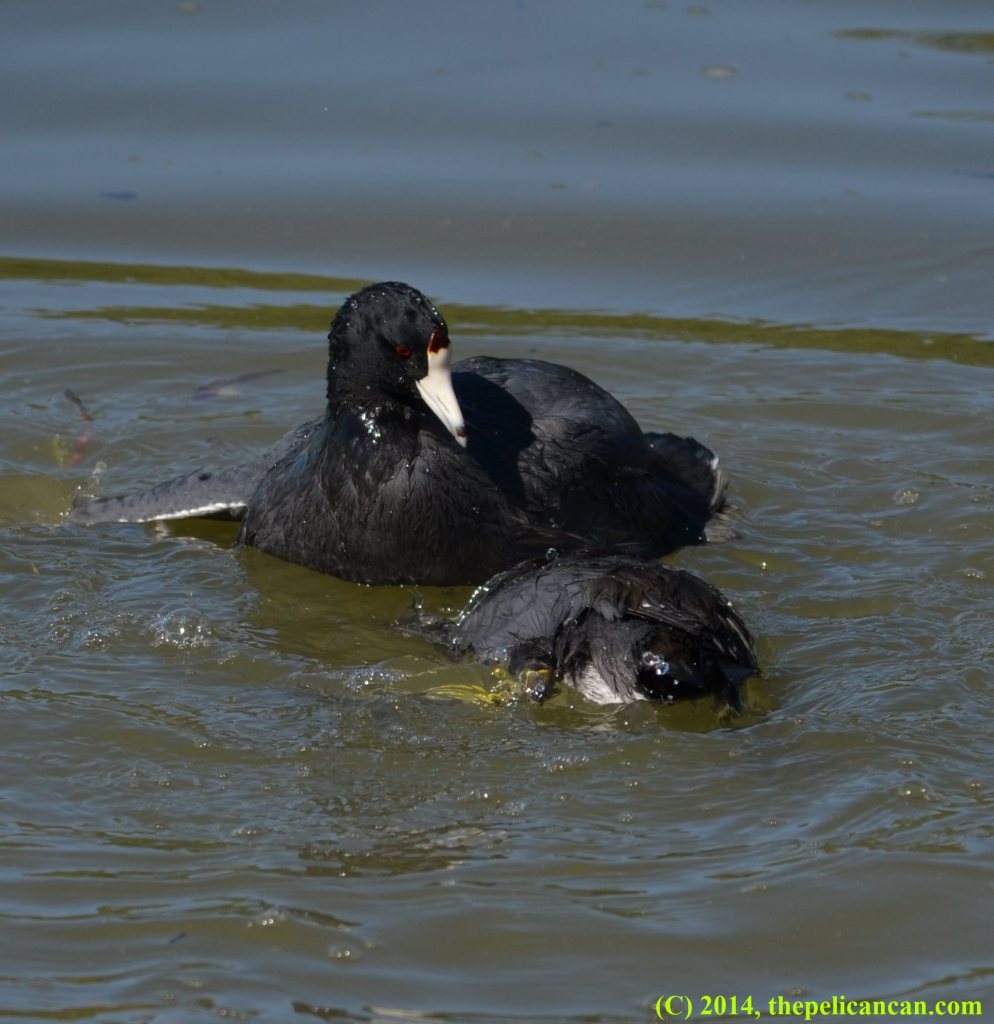 Why does my maniacal laugh sound so much like a cute little chirp? 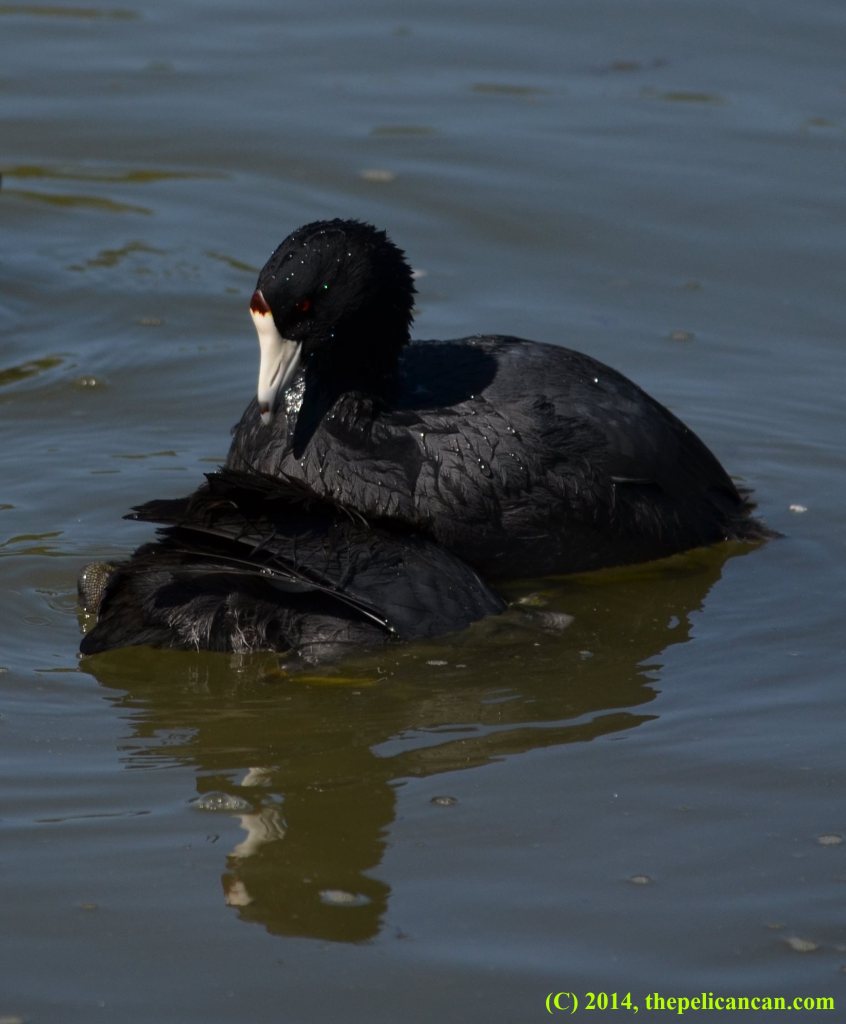 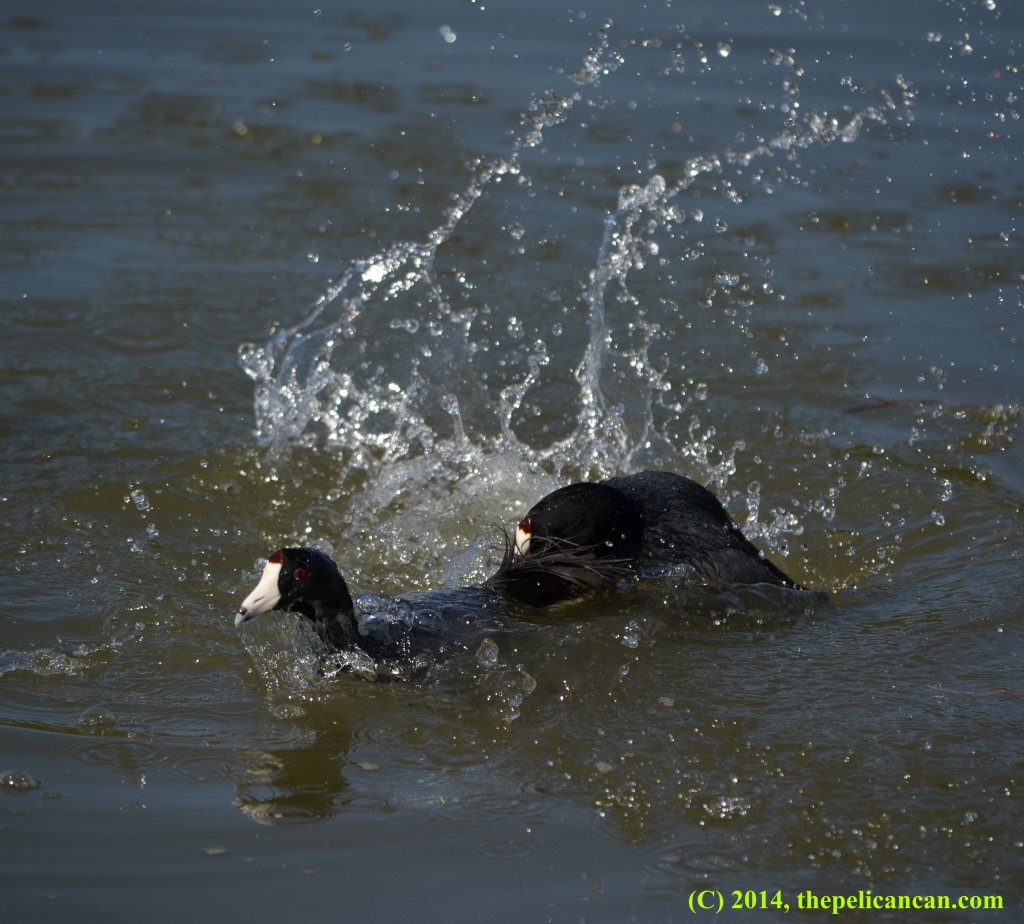 Swim for it, little one! 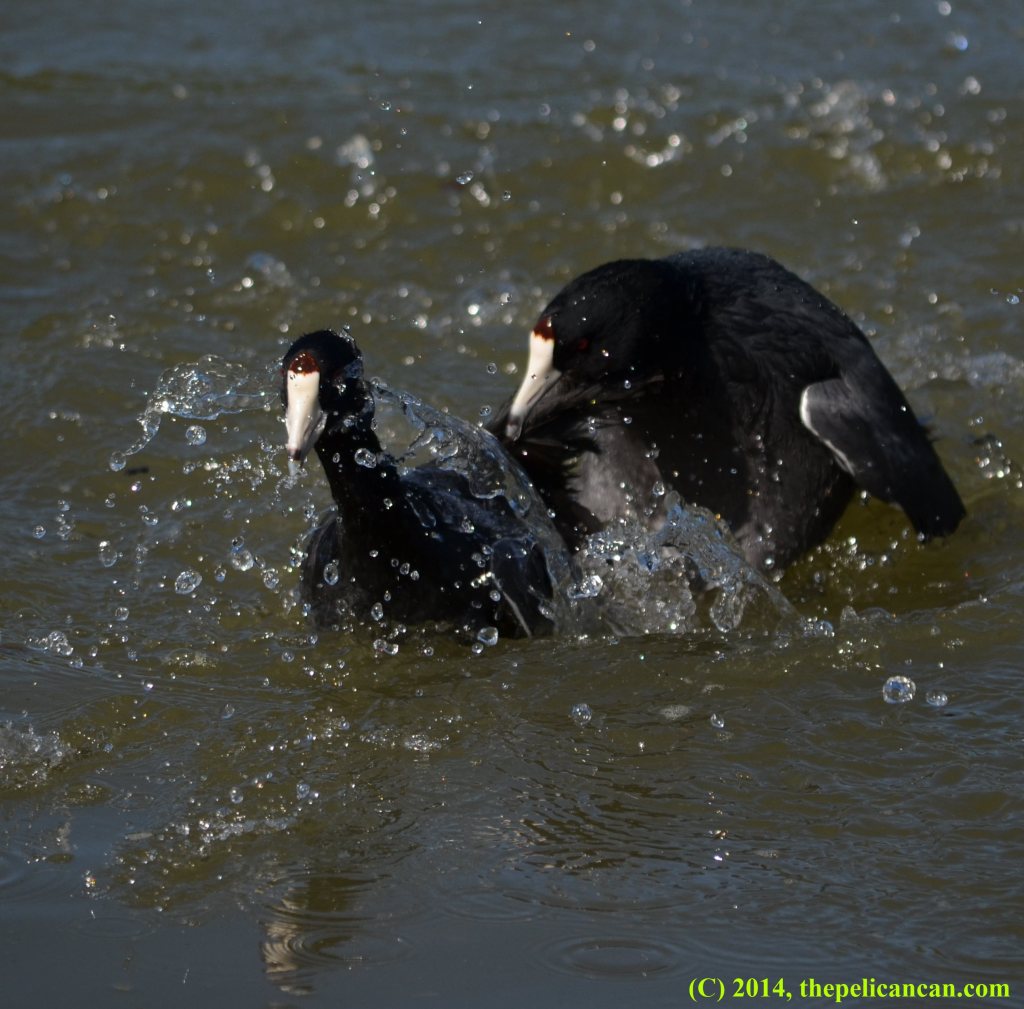 Next, on “Coots Who Kill,” hear serial killer Anna the Coot describe how her last victim almost escaped from her evil clutches.

The aggressive coot easily subdued the fleeing coot and held her underwater. Again the coot escaped and was recaptured and forced back underwater. Finally the victimized coot was able to get free and stay free.

The pelicans were still very chill. 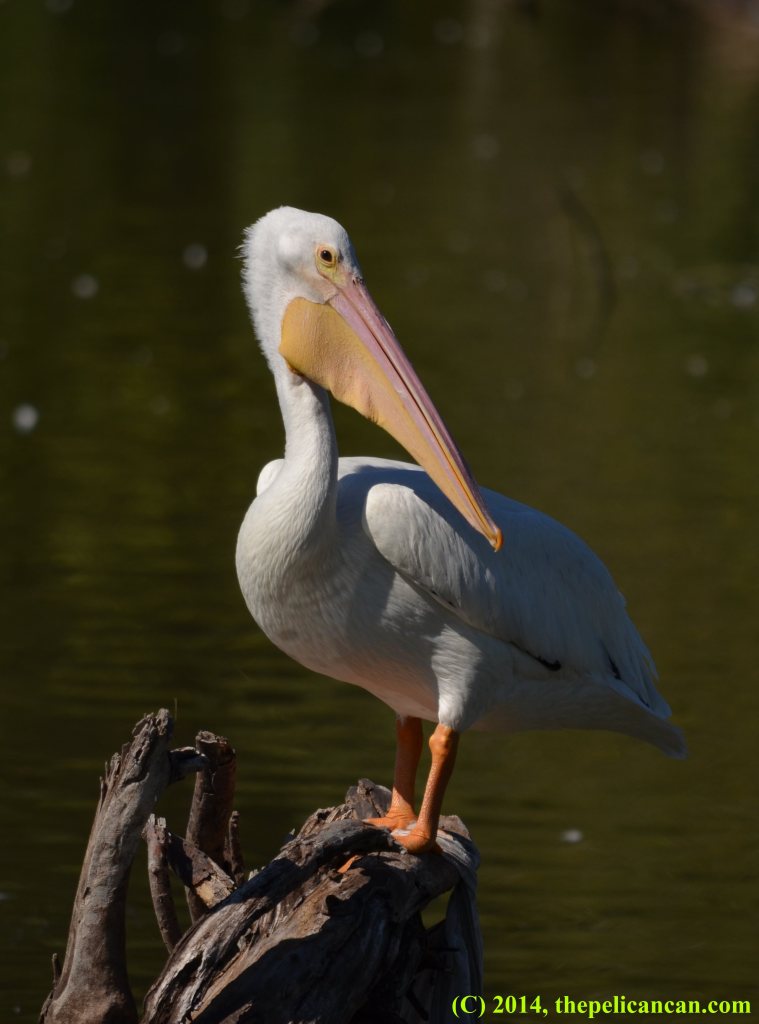 Back at the Shore Log, the birds were still grooming. 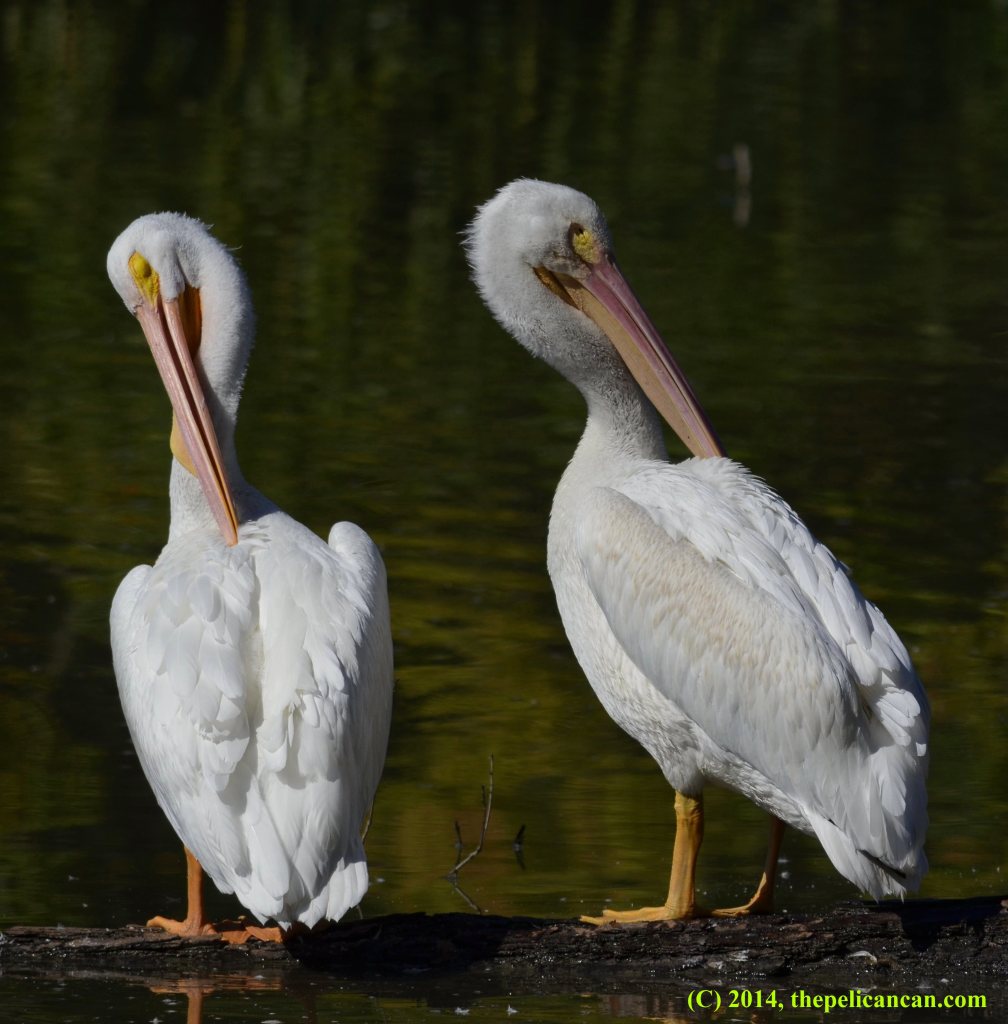 Dread Pirate Roberts and another pelican preen together. Perhaps the pelican on the left closed her eye to make Pirate feel more welcome.

Then I saw a familiar pelican: the bird with the hurt foot from October 11. I last saw her on November 8th, and although she is still limping quite a bit, she seems to be getting around much better than she did at this time. I can’t believe both she and Copper Woman have been here for a month.

I have decided to name the bird with the hurt foot Philoctetes. 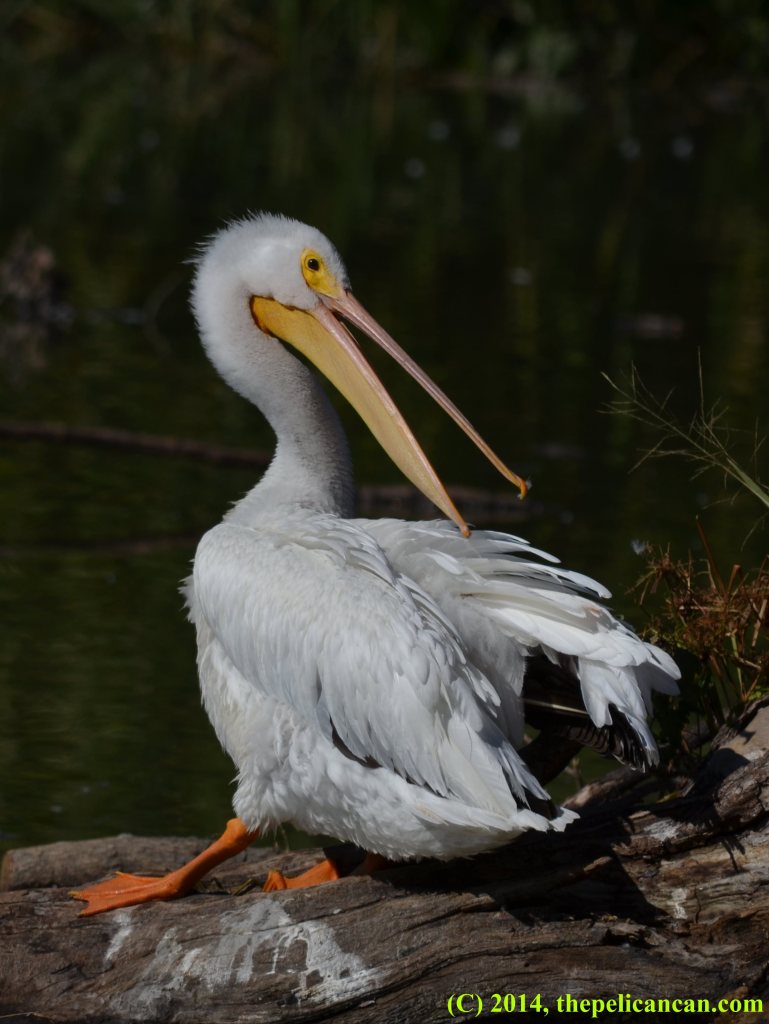 Before I left, I went out on the dock one last time. A juvenile jumped up on an oddly shaped log and was having a great deal of difficulty keeping her balance. 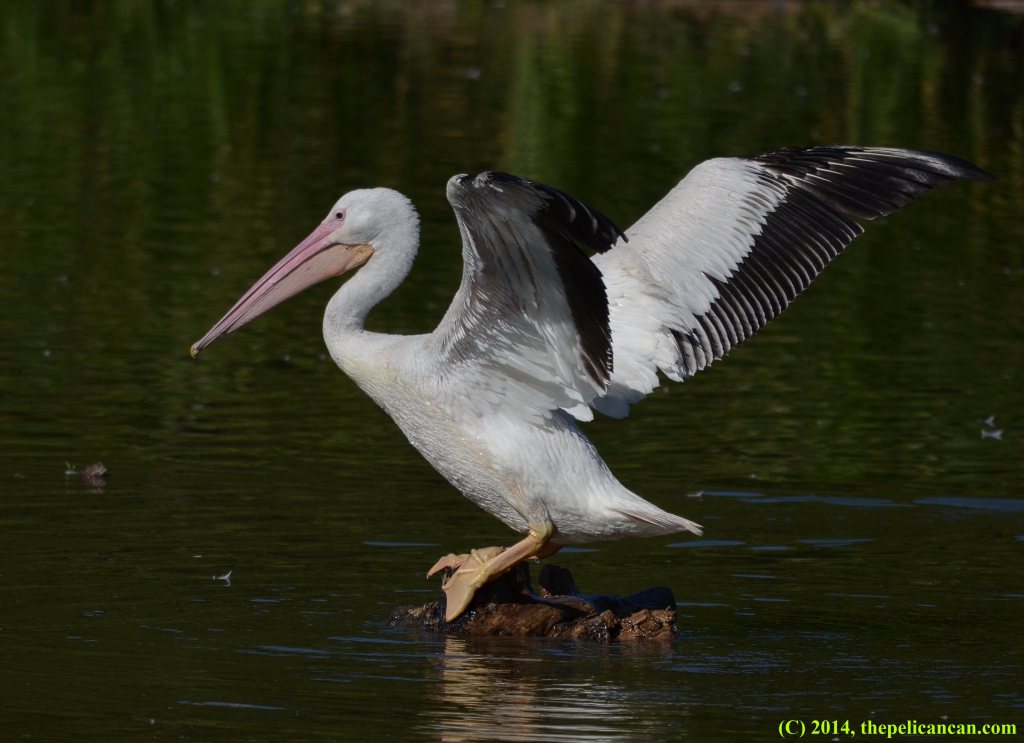 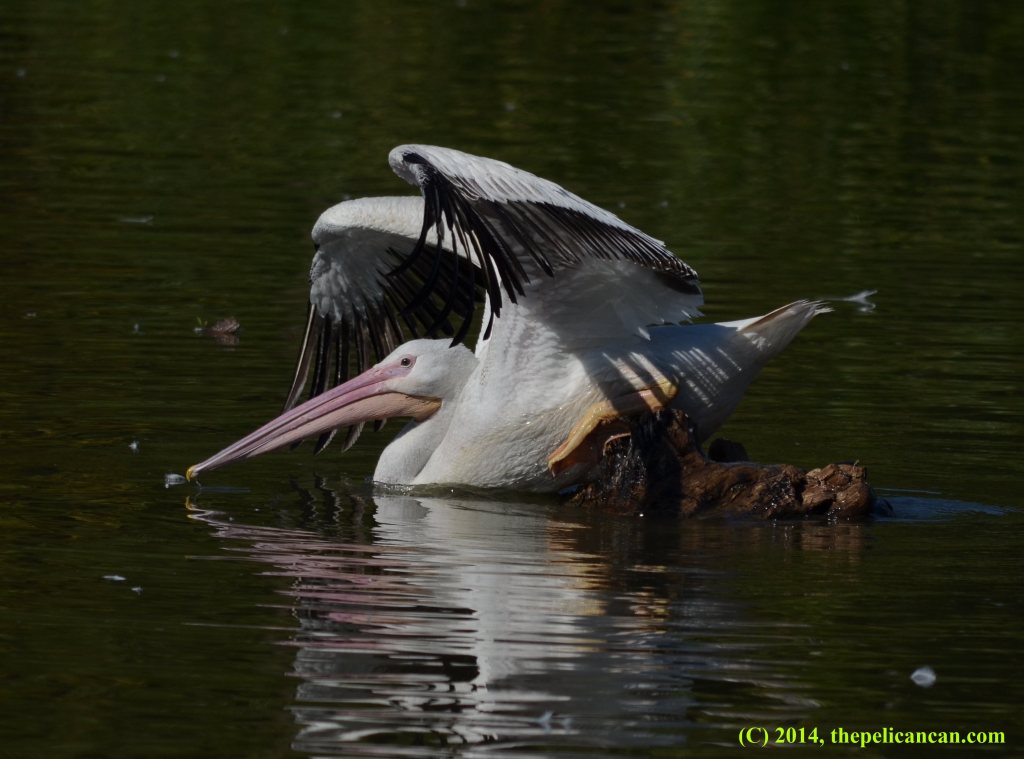 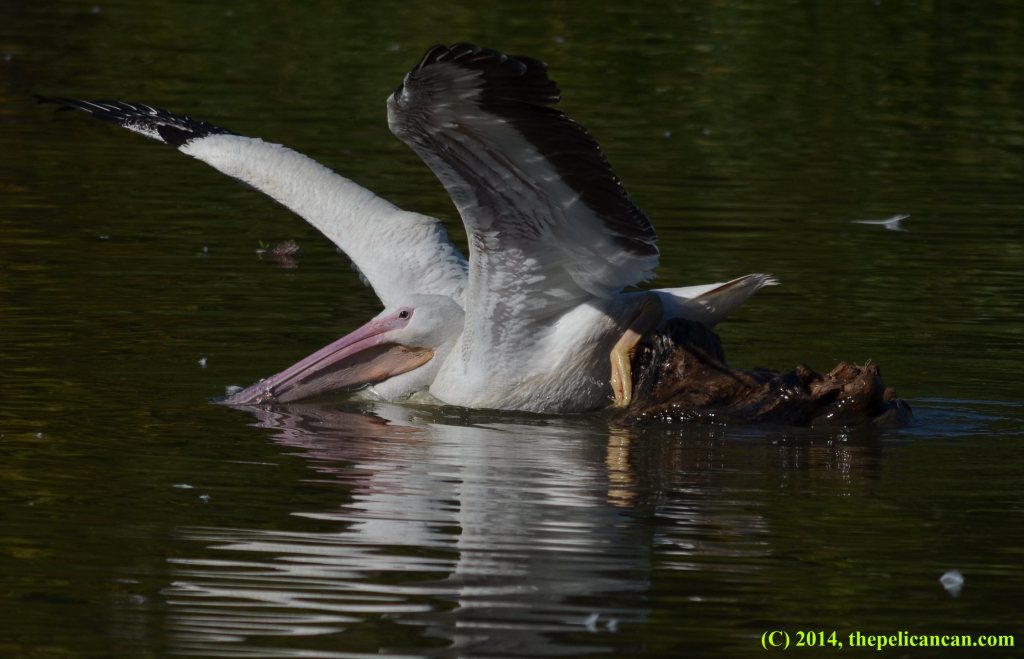 A dozing pelican briefly opened her eyes, then closed them again. Much more action would occur in the next few days, and perhaps she knew she would need her energy. 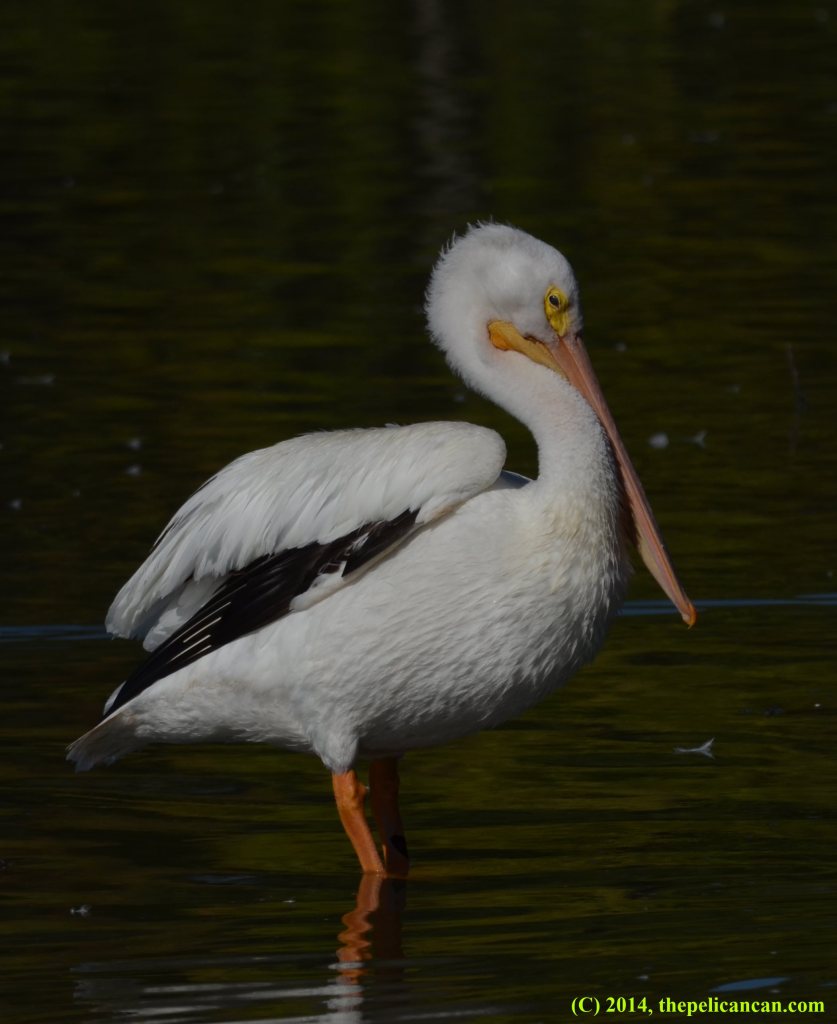