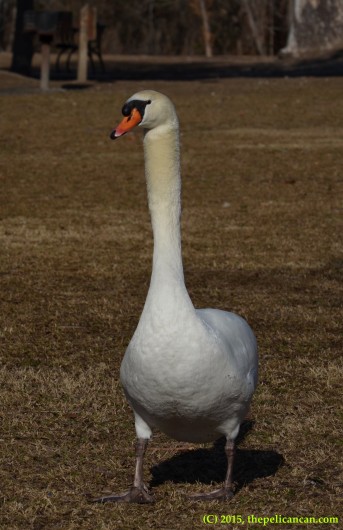 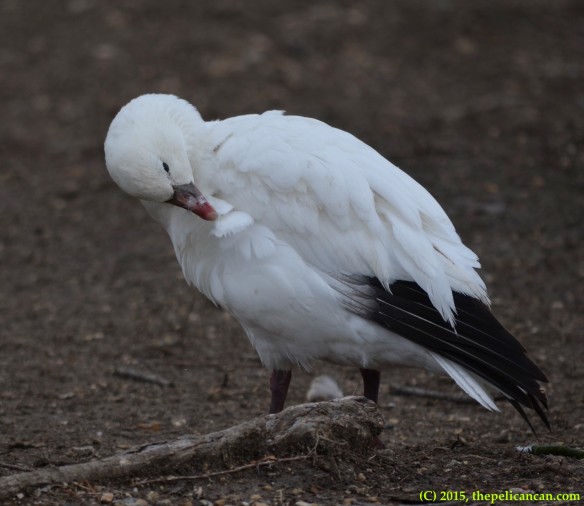 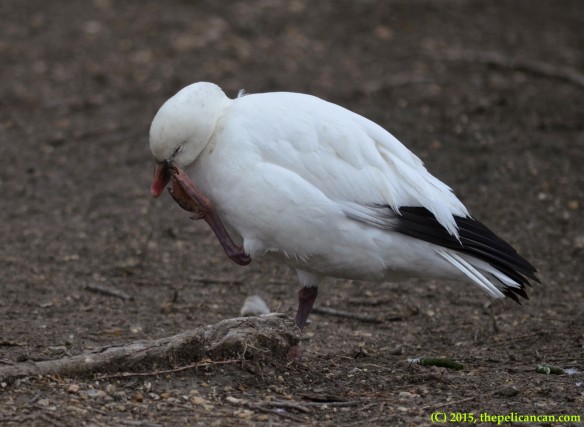 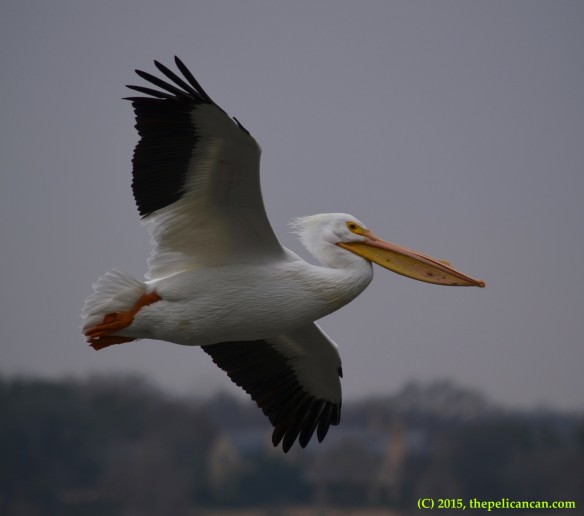 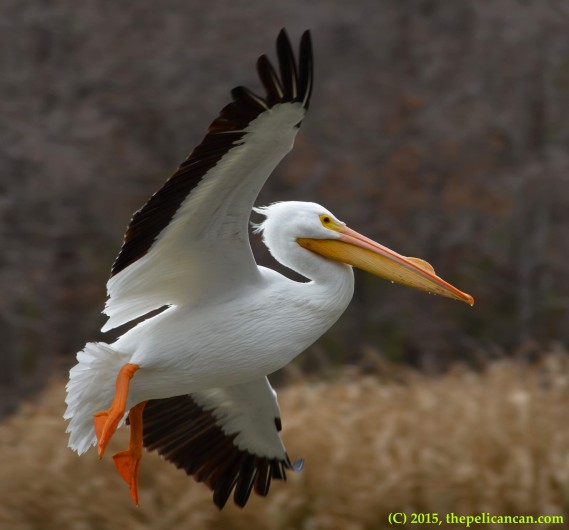 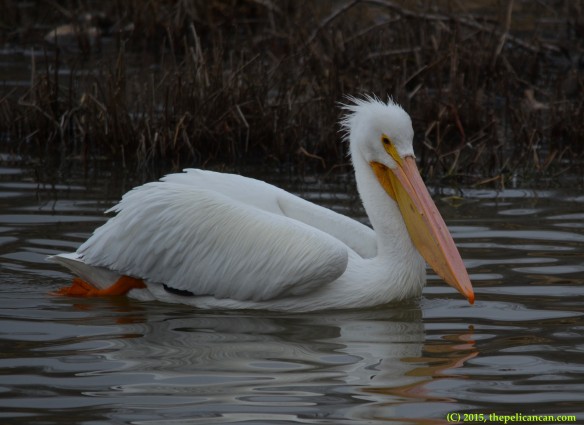 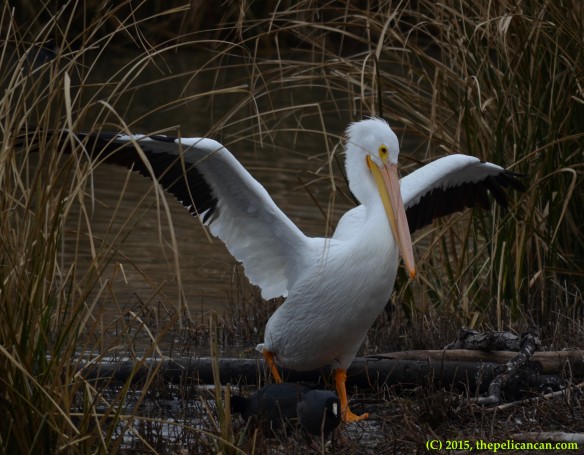 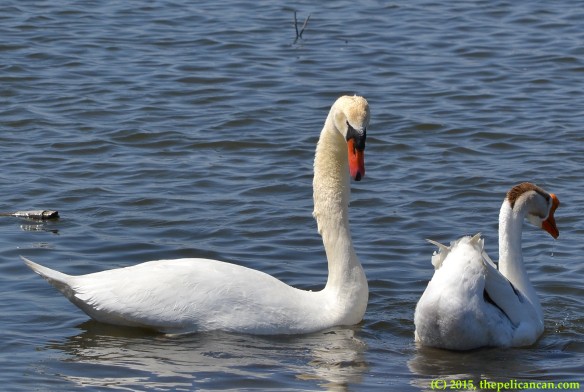 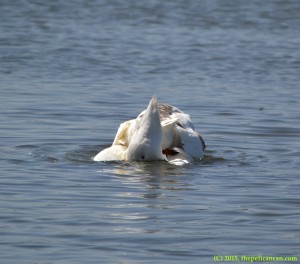 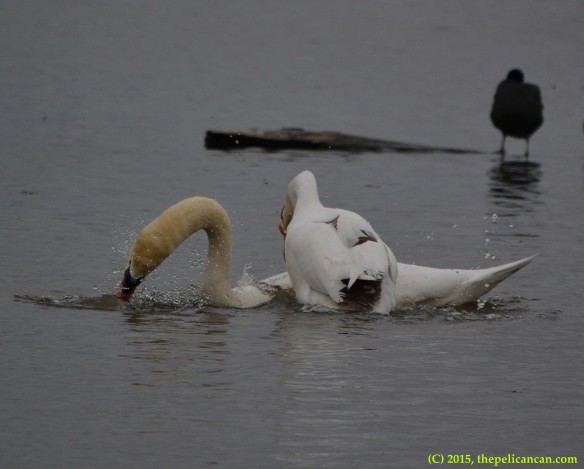 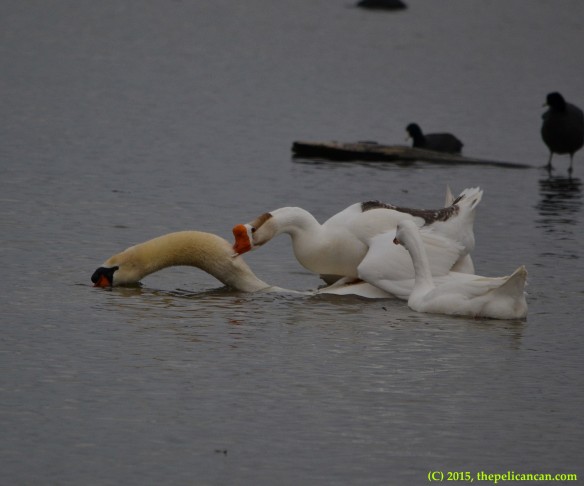 The next pics are from January 17th. 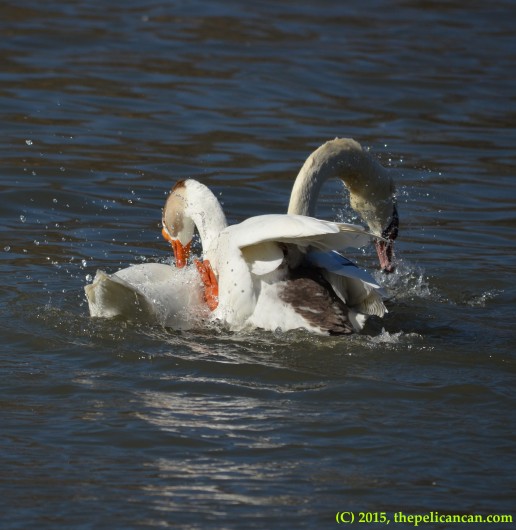 Patches likes ’em big. And he likes ’em in a genus different from his own.

What the hell, at least the two crazy kids are in the same order. 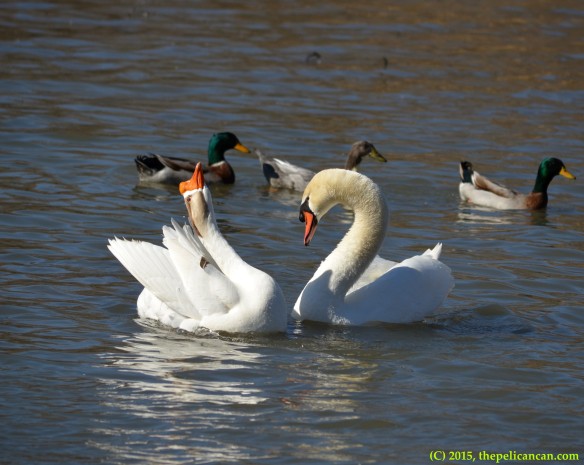 Here is an excellent example of Patches’s post-copulatory display. 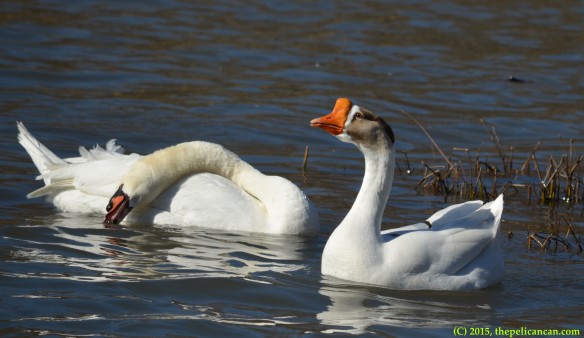 His work complete, Patches decides to go see what Annie is doing while Lady Katherine preens.

The next encounter that I witnessed, on January 20th, involved extensive courtship displays by Lady Katherine. Watching her, I wondered how she and Patches were ever able to effectively communicate their desires to mate with each other. Although Patches’s pre- and post-copulatory displays seem to be fairly consistent with displays performed by other geese, Lady Katherine’s ritualized displays have been severely curtailed. The only consistent display that she performs is the courtship display, although sometimes she will perform some pre-copulatory head-dipping with Patches before he mounts her. Lady Katherine also retains preening and head-turning behavior after copulation. Head-turning is the main activity she uses to flirt with Patches in her courtship display.

Lady Katherine head-dips as part of her courtship display for Patches.

The next several pics illustrate head-turning. Notice that the top of half of Lady Katherine’s neck is ruffled so that it appears larger than the bottom half. This is part of her display. To head-turn, Lady Katherine turns her head from side to side, dipping her head and neck downward in a deep bowing motion as she switches directions. 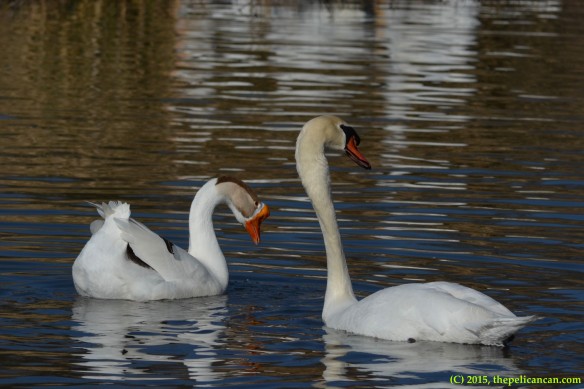 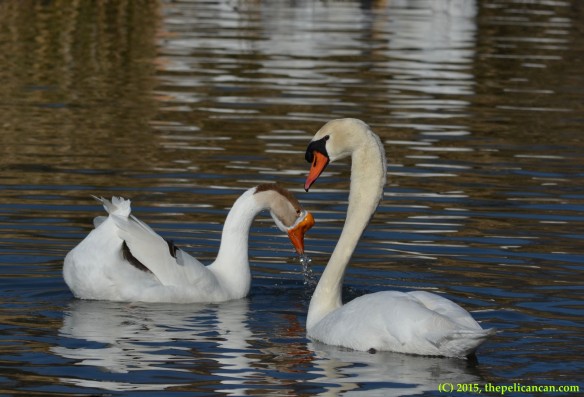 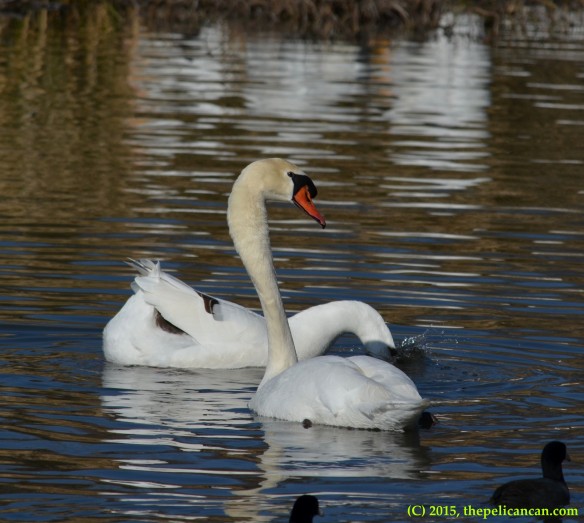 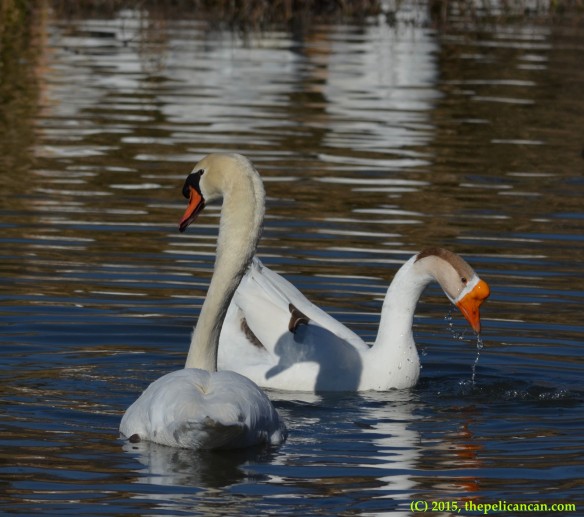 They swam out further from the shore, continuing to dip their heads. 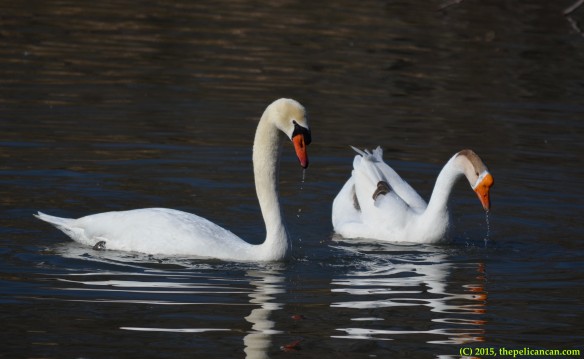 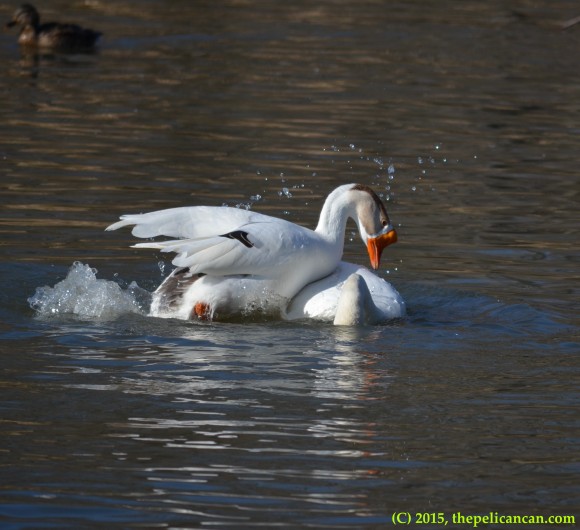 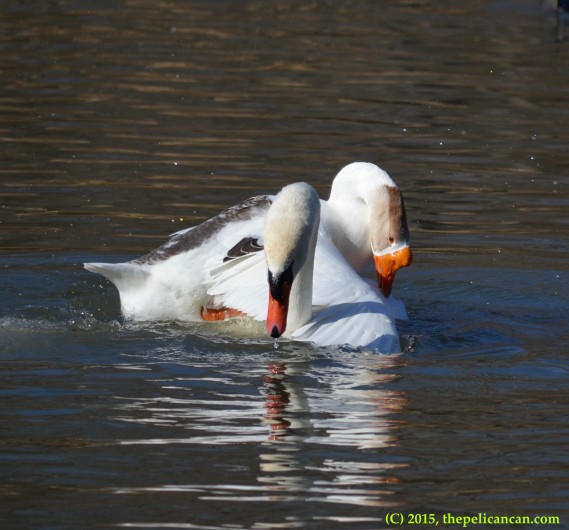 At least Annie wasn’t around this time. 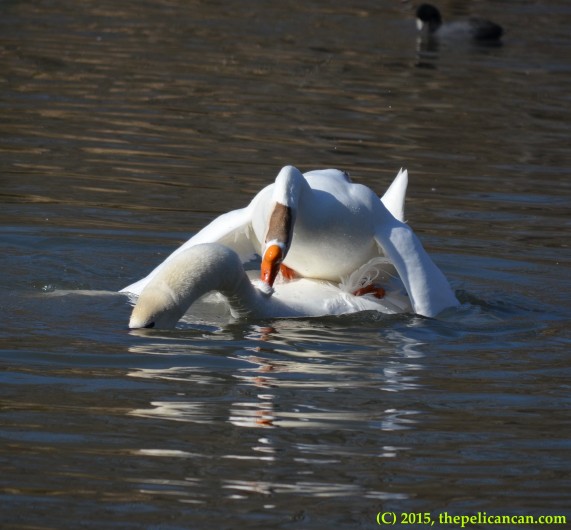 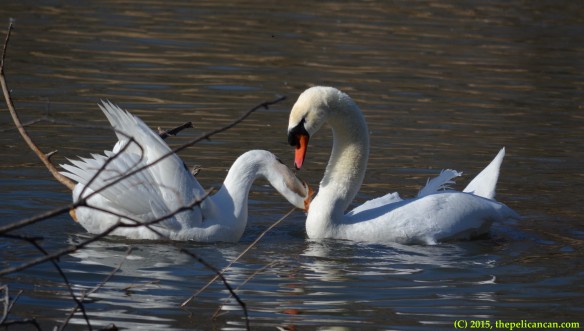 Unfortunately for geese and the creatures who love them, love frequently means pain. 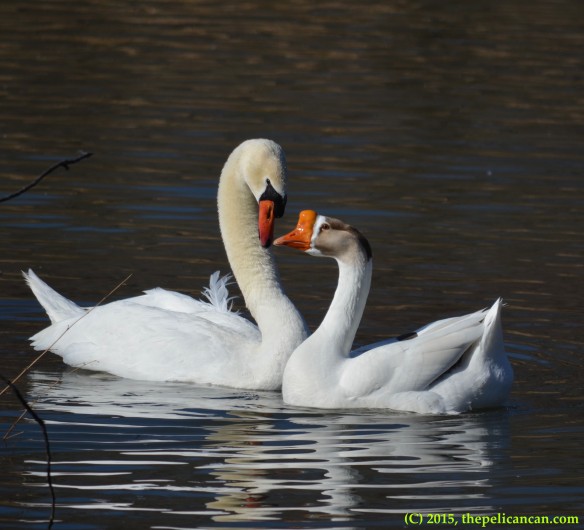 As part of an initial post-copulatory display, mute swans rise together out of the water and turn to face each other, touching breast-to-breast, while head-dipping. I wonder if Lady Katherine doesn’t perform this display because Patches doesn’t initiate it. Patches doesn’t dismount the way a male swan does; he slides off her back, often turns toward her to bite her neck, then displays.

When I saw them mate on the 27th, however, Lady Katherine attempted what I thought looked like a version of a post-copulatory display. 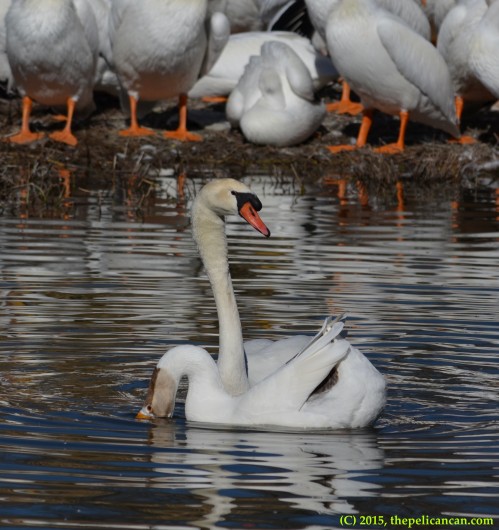 Lady Katherine and Patches are in front of the marshy spit where the pelicans roost on cold days.

Patches, I feel so guilty sneaking around like this. Isn’t there a better way we can be together? 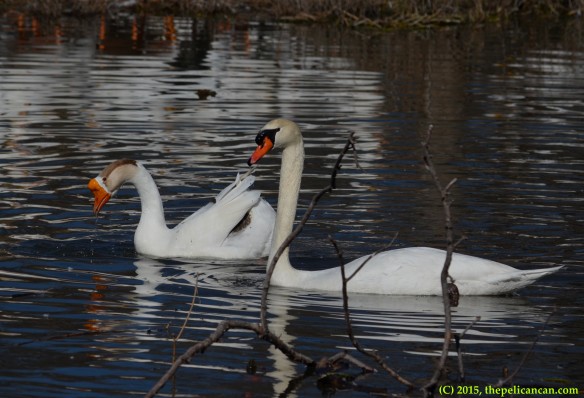 Oh Patches, let’s run away together! Take me away from all of this!

I can’t unsee this, so I’m going to torture all of you: Patches’s pseudopenis has not yet retracted. 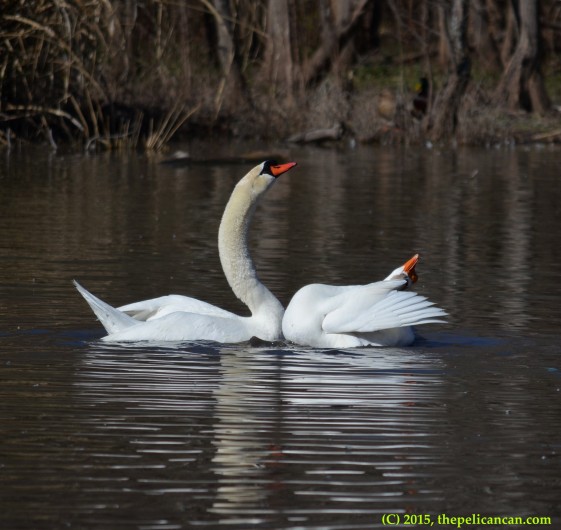 A few days later, I watched Lady Katherine waddle up onto the main pelican loafing grounds by the dock and perform a courtship display in front of Chester, another white goose. I’m not sure if Chester even noticed that she was there. That incident filled me with even more respect for the flexibility and ingenuity of interspecies communication. Behavior may be ritualized, but environmental factors can change rituals, as seen with Lady Katherine while mating with Patches. Patches didn’t respond in the way that Lady Katherine expected after mating, so she changed the way she behaved.

On February 2, they were back at it again.

I really like our rendezvous spot here by the pelicans, Patches. I think you’ve chosen a good place for us to keep meeting! 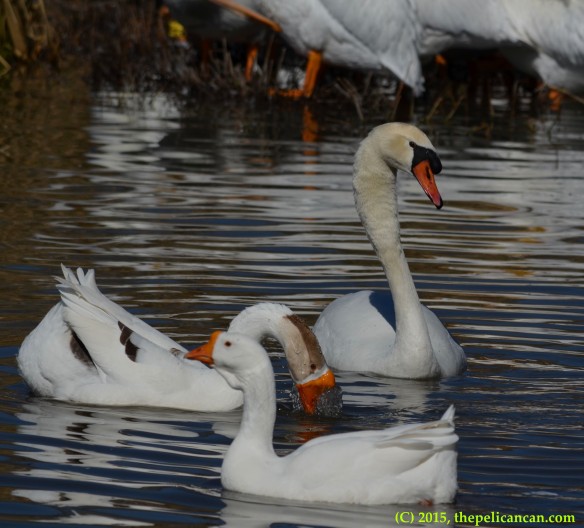 Can we lose her?

Unfortunately for Patches and Lady Katherine, Annie refused to be shaken off. 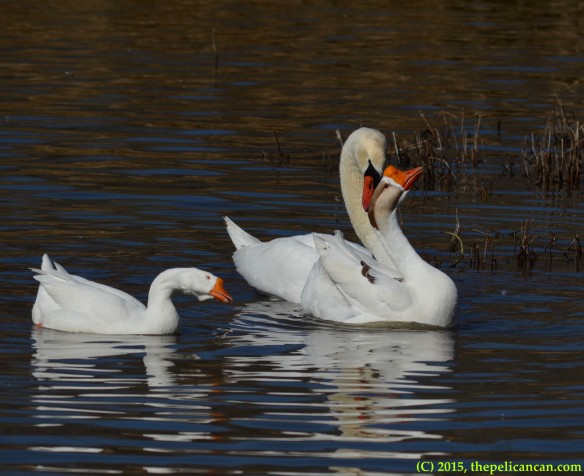 I feel fine, and I feel good. I’m feeling like I never should. 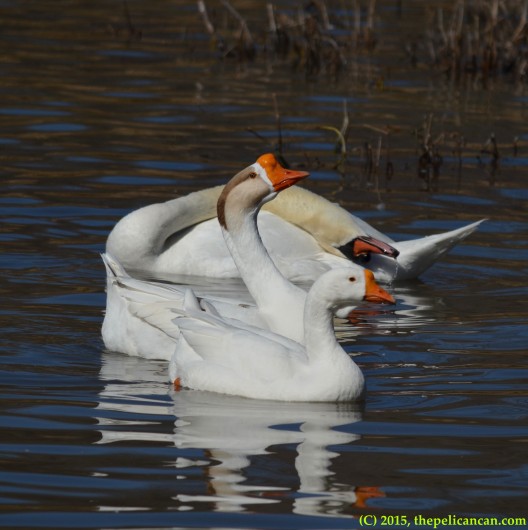 In the lake the birds come and go, talking of HOLY SHIT THAT SWAN AND GOOSE JUST TOTALLY DID IT.

Mute swan couples are supposed to bond very strongly to each other, staying together even after mating and chick-rearing is finished. Patches will occasionally mate with Lady Katherine, and sometimes I see them near each other on land, but Patches spends most of his social time with Annie. I wonder how Lady Katherine deals with having a sexual partner but not a social partner. Or does she not notice the social absence because Patches is not a swan?

When I watched Lady Katherine and Patches last year and for the first couple of encounters this year, Lady Katherine usually seemed to be initiating the courtship. This past Tuesday, I watched Patches attempt to entice Lady Katherine into some sweet interspecies loving, but she did not reciprocate. Another observation: I have not yet seen Patches mate with Annie this year. I really hope that the two geese have been mating and that I just haven’t witnessed it.

I will continue to document The Love Song of J. Alfred GooseSwan, but further couplings will get their own posts.