In mid-March of this past year, I went to Florida to visit my parents. I also did some birding. My first visit was with my mother to see the Florida scrub-jays at the Lyonia Preserve in Volusia County.

Florida scrub-jays are extremely intelligent birds. They understand the concept of the future and the need to plan for future activities. They are curious and mostly fearless. They live together in small family groups. They are super awesome, and I get very sad that their numbers keep declining and Florida doesn’t seem to be doing much to help them.

There are two main populations of scrub-jays in the United States: the Western scrub-jay and the Florida scrub-jay. The Florida scrub-jay is the only bird native to Florida and is currently classified as Vulnerable. Florida scrub-jays reside in oak scrub habitat. The birds scavenge throughout the bottom third of the forest canopy and need light to penetrate those areas so they can see down there. Frequent fire is required for maintenance of this habitat; without it, the oaks would grow too large and block out too much of the light. Then other birds who are attracted to the new habitat, such as blue jays, force the remaining scrub-jays out. Unfortunately, oak scrub is also a great kind of habitat for humans to clear and use for commercial development and orange groves.

If someone were shooting a horror movie in Central Florida and one of the characters were walking through oak scrub and said, “I feel like I’m being watched,” she would be correct, but not because a ghoul was stalking her. Scrub-jays have a “sentinel” role within their families in which a bird watches for predators and alerts others if one is spotted. When walking through the scrub, one can frequently come across these birds perched in an area where they have good visibility.

Florida scrub-jays are not afraid of humans and will often fly to and perch on them. One bird tried to take a stone out of one of my earrings; another kept working on the metal gromit on my father’s baseball cap.

My mother was with me the first time I saw a scrub-jay. It was our first visit to the Lyonia Preserve in March of 2007. I knew that the birds would be in the lower portion of the canopy, but we hadn’t seen any. Then we made a turn and saw a scrub-jay standing on the ground on the edge of a patch of scrub. One of her feet was extremely twisted. Unlike the other scrub-jays we later saw, she was not banded. My mother named her Keyser Soze because of her injury. 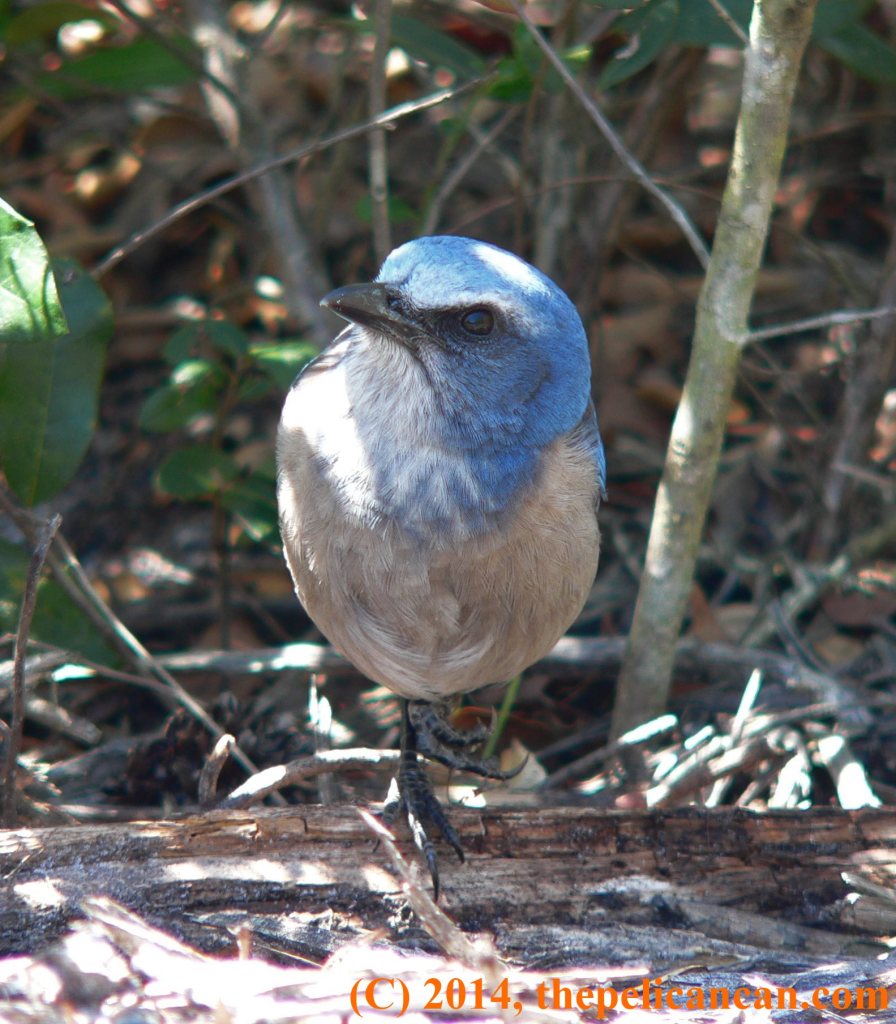 Keyser Soze in 2007, being adorable and not at all like a criminal mastermind.

We were talking to and cooing over Keyser Soze when Keyser Soze suddenly launched herself toward us and landed on my mother’s head. We had heard that scrub-jays were curious and would land on people, but we weren’t expecting it to happen so soon, and with so little hesitation on the part of the bird.

Hell, even now that I’ve had scrub-jays land on me multiple times, I still don’t expect it and initially freak out a little when I see a cute blue bird FLYING STRAIGHT AT ME.

On this visit we didn’t see as many birds as usual, but we saw some sentries perched in trees, and one of the sentry birds kept flying closer and closer to us, checking us out. 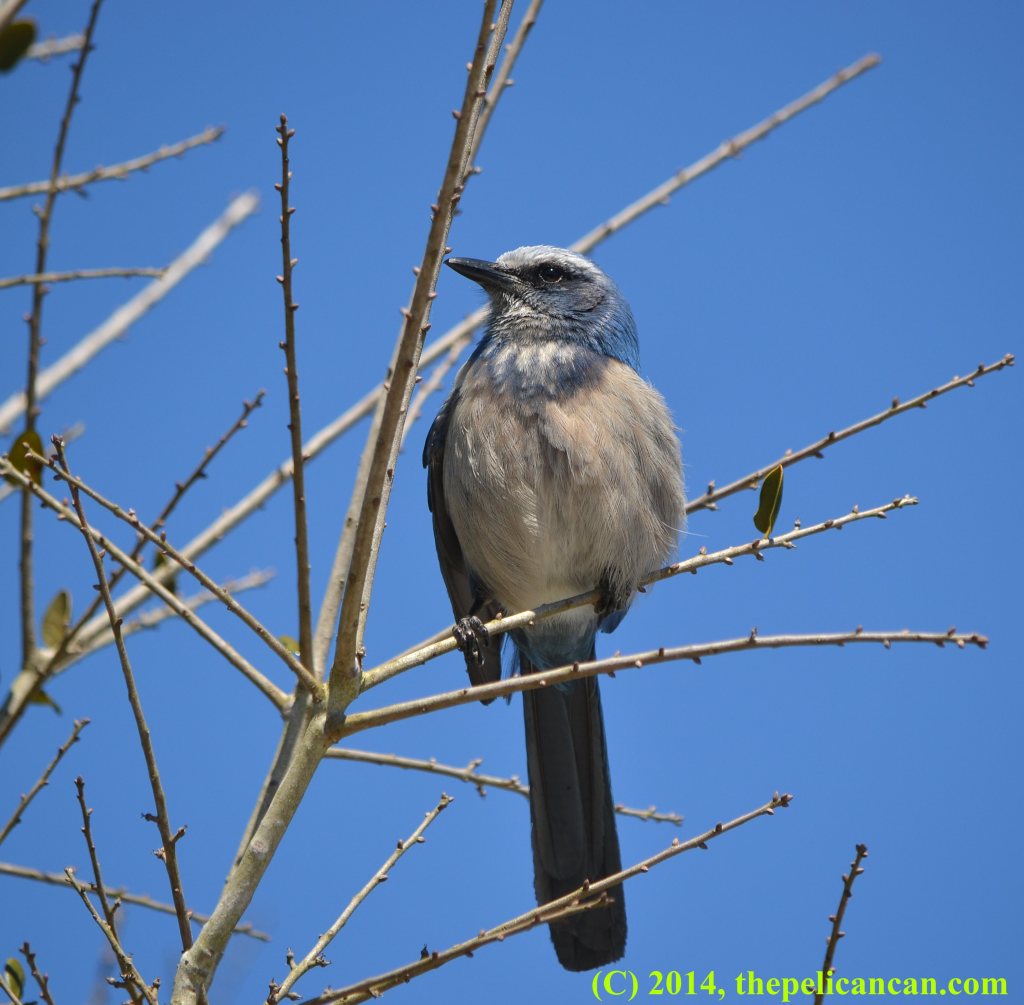 This was the bird that kept flying in toward us. 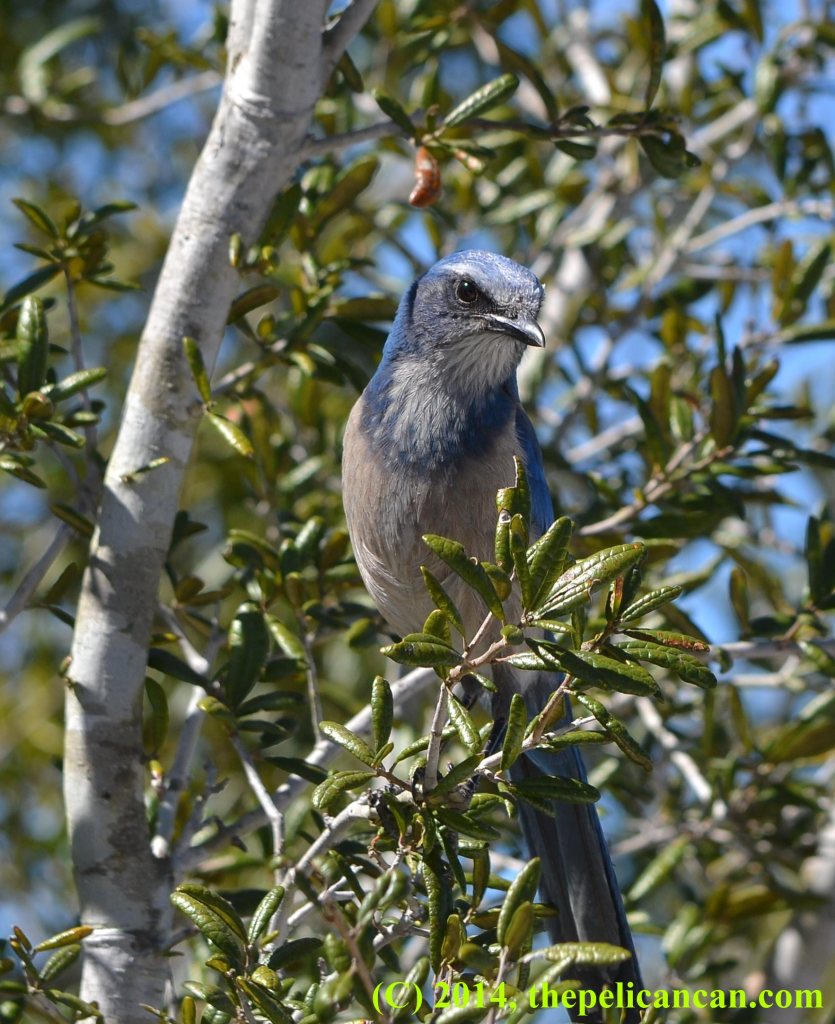 Then we came across a bird hopping on the ground that decided it would rather perch on my mother. 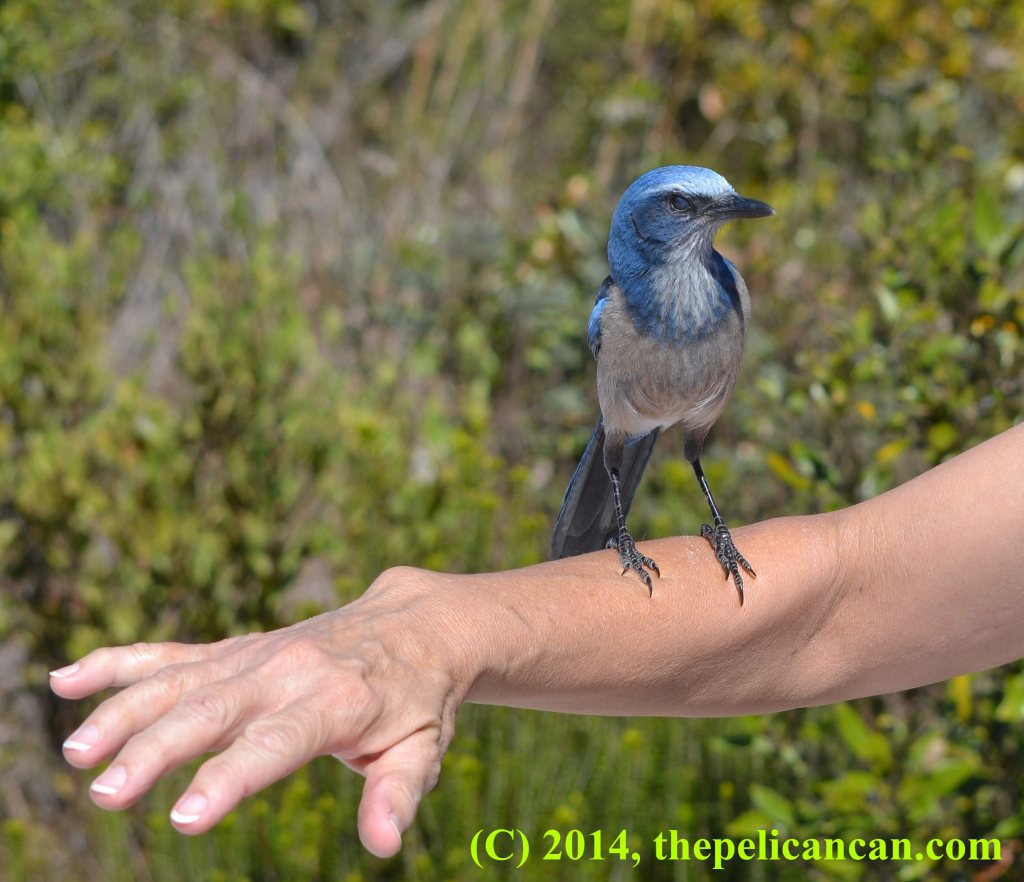 HI! WILL YOU BE MY FRIEND?

This bird seemed intrigued by my mother’s water bottle, possibly because of its color. 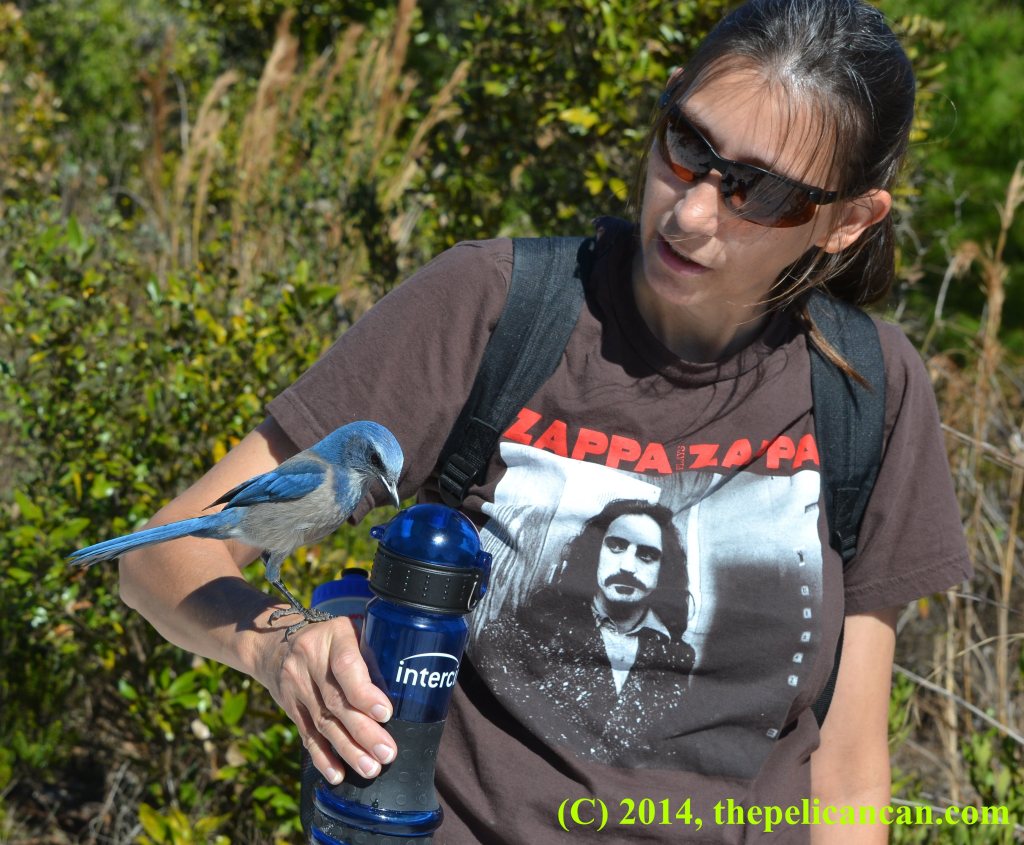 The bird is eying the water bottle, but both my mother and Frank Zappa are eying the bird. The bird had better watch her back.

My mother opened the cap on the water bottle, which momentarily frightened the bird and caused her to flutter to the ground. My mother tried dripping some of the water from the bottle onto the ground in case the bird was thirsty. That didn’t work. 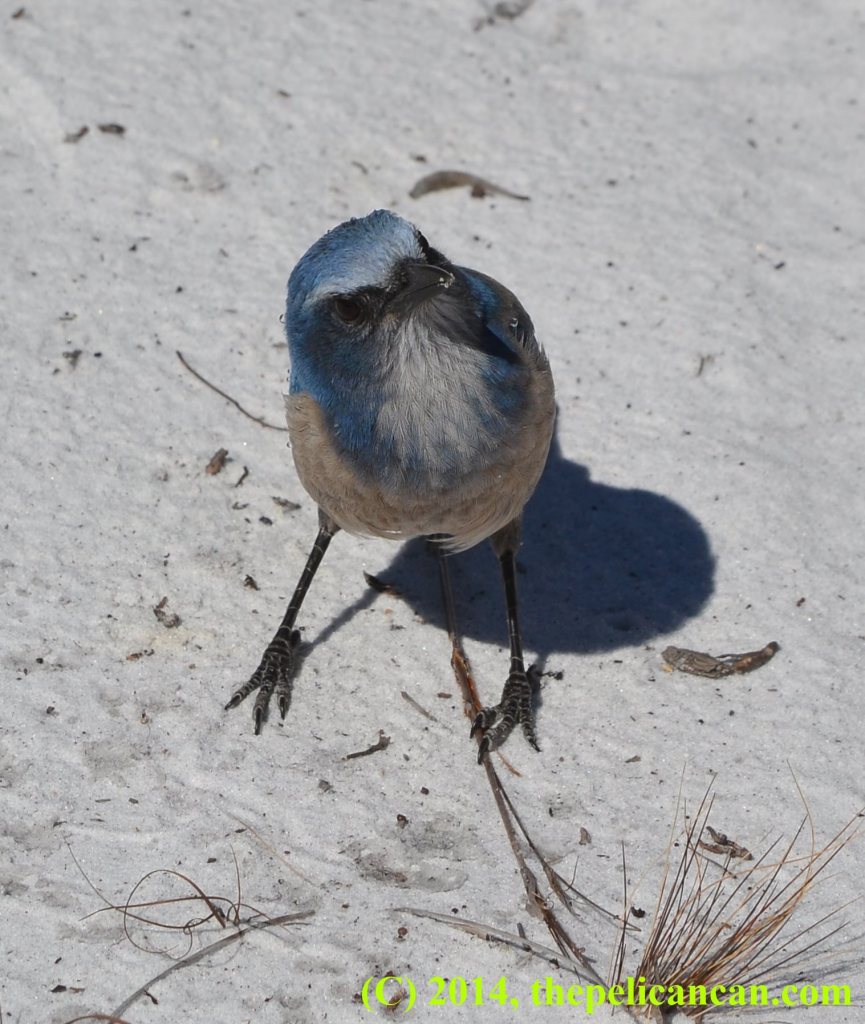 What the hell are you doing, lady? 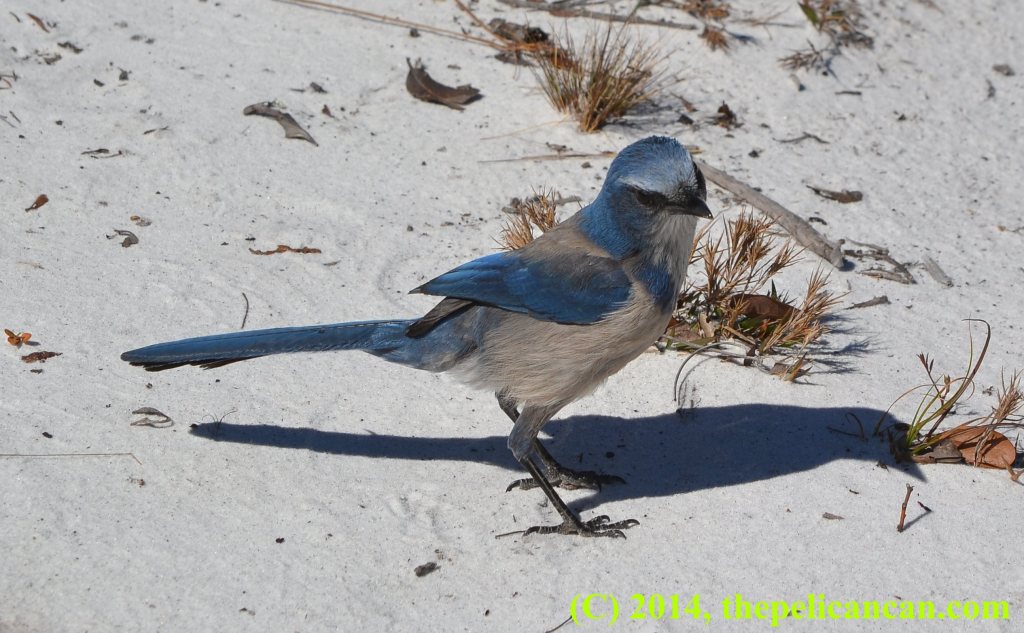 The bird got tired of the water landing near and on it and flew back up onto my mother’s arm, trying to go for the water bottle again. Then another scrub-jay that had appeared at the edge of the scrub flew on my mother’s head.

My mother poured water from the bottle into her palm. The bird on her head flew down onto her arm near the first bird, who was drinking the water.

Beautiful. Curious. Intelligent. Family-oriented. But these birds are extremely dependent upon a very specialized environment, and humans want that environment for themselves.

The second bird decided that she too wanted a drink, and while she was drinking, the first bird flew onto the ground, near the edge of the scrub. 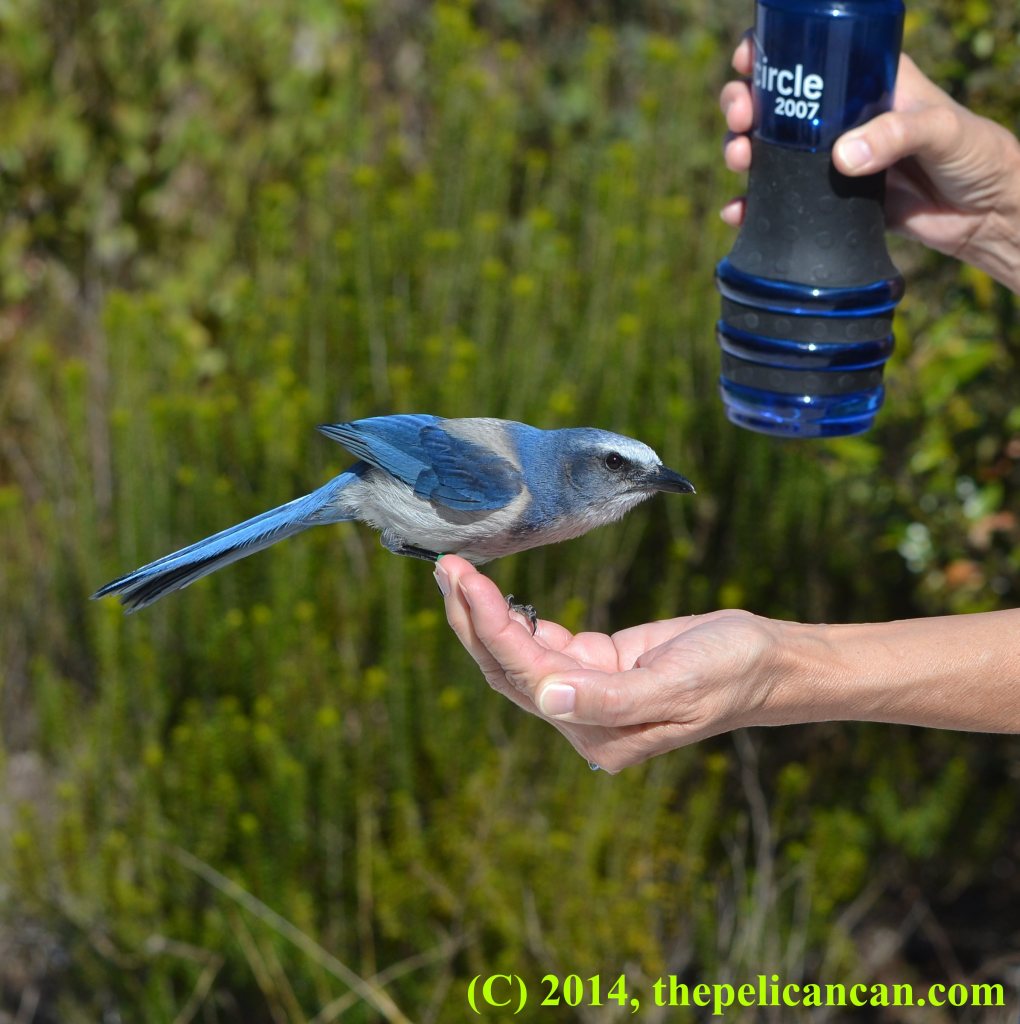 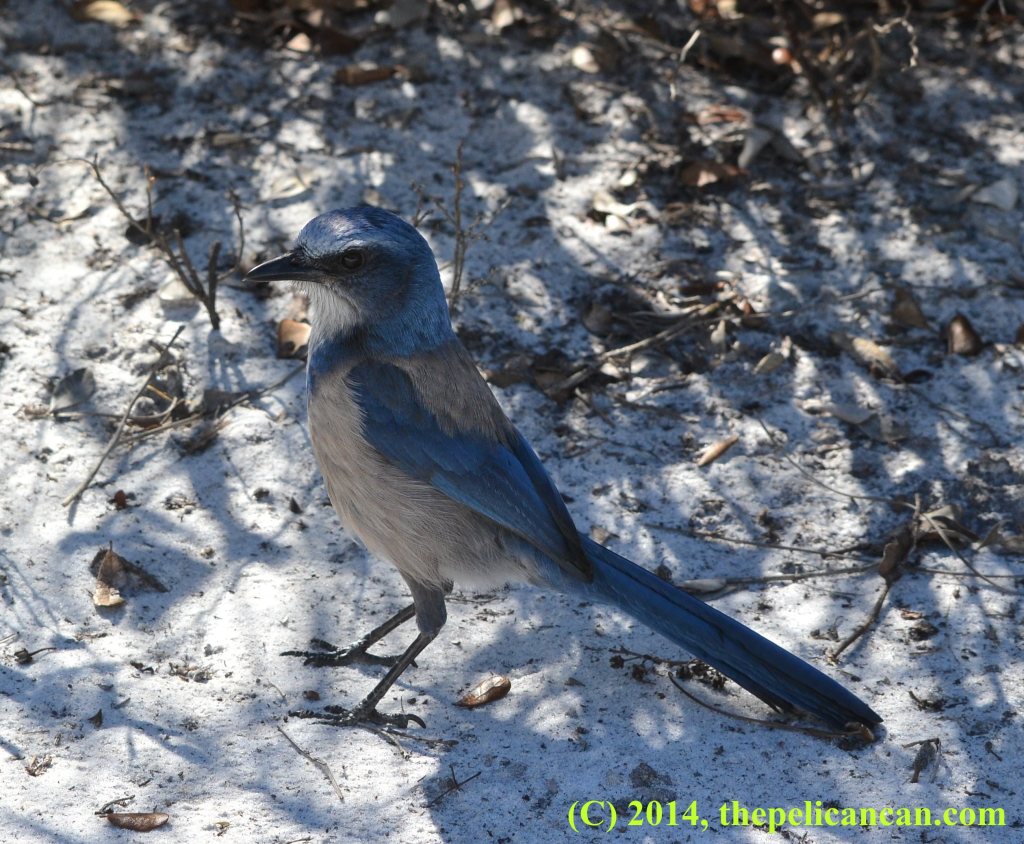 As we were about to exit the Preserve, we saw a bird hanging out in the pavilion area. 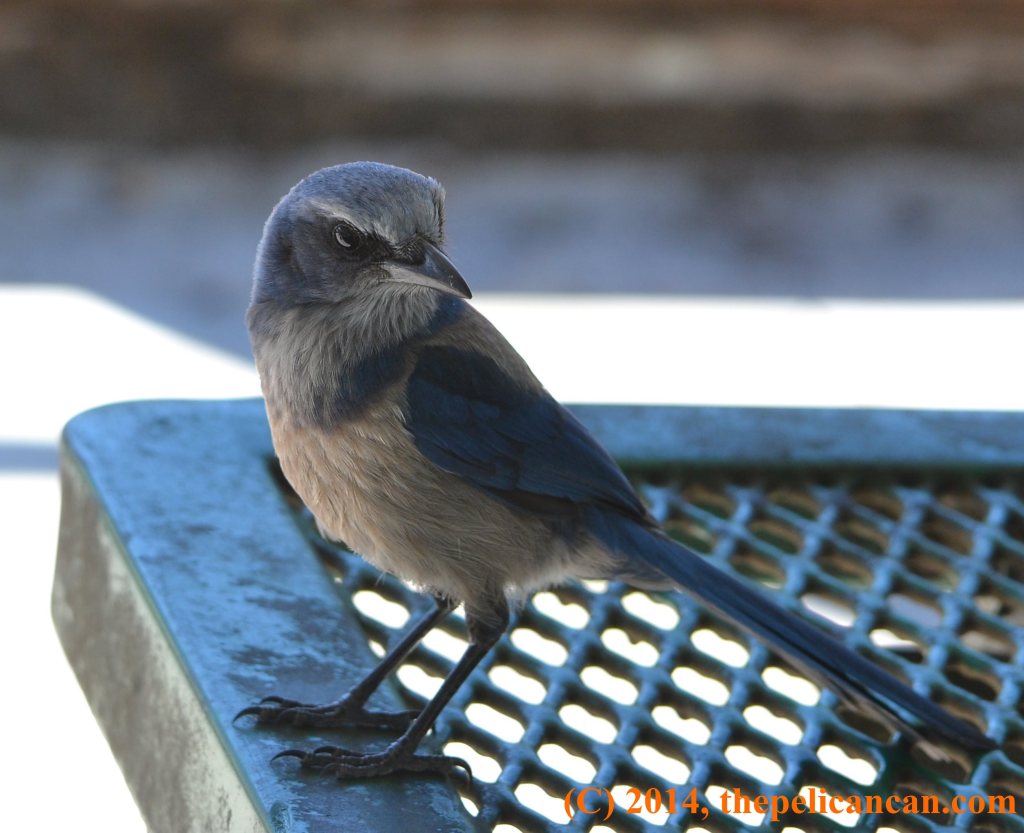 This is where you humans eat food, right? How about you get it all out and then go walk around for a minute, and I’ll guard it for you.

Next time I’m in Florida, I will definitely be back!