Q and I have been watching the progress of this year’s birds at the UT Southwestern rookery since late March. Most of the great egret juveniles have been testing out their wings and making short practice flights. Black-crowned night heron and anhinga juveniles are branching, and some of the juvenile herons are flying. Several tricolored herons arrived a few weeks ago, although I have seen branching tricolored juveniles as well as just-hatched tricolored chicks. Cattle egret chicks are beginning to hatch. Ibises have just arrived, and although I’ve seen a few little blue herons throughout the season, only recently have I seen one standing on the beginnings of a nest.

Q and I typically visit the rookery on one of the weekend days. On Saturday, June 27, I went to the rookery alone because Q was involved with Field Day, which is a holiday for ham radio operators.

Unfortunately, all of the fledging activity makes it more difficult for me to know if juvenile great egrets on the ground need help or if they are on the ground intentionally. The main criterion I used last year was to hang back and watch them for a while to see if they took off. I saw J R at the rookery that June Saturday, and he suggested another way of thinking of my problem: if the bird looks like it’s having fun, don’t disturb it!

I have been to Rogers several more times since taking Number One and Number Two there. On this Saturday at the rookery, I had already walked over three-quarters of the way around the rookery and was trudging up the path back toward the Memorial Garden. Then I noticed, about five yards away from where I was standing, an anhinga sitting on the ground near the path.

My first impulse was to stop and take a picture. Just as that thought occurred to me, a more urgent thought overrode it: “WHY IS THAT ANHINGA ON THE GROUND?!”

The anhinga looked like a juvenile. I knew that juvenile anhingas branched, like owls, as they grew into adults, leaving the nest early but staying high in the trees until they were able to fly. They didn’t spend time on the ground. The juvenile was on the edge of the path and could disappear into the trees at any moment.

I dropped my stuff, grabbed a blanket, and ran as fast as I could toward the bird.

She didn’t seem able to fly, and I grabbed her. Like pelicans, anhingas have gular pouches, and when I got a hold of the juvenile, she turned toward me, flared out her gular pouch, and struck. It was only habit that kept my hands firmly on the bird while I dodged her attack. I managed to get the blanket over her body, but I couldn’t get it over her head to subdue her, so she struck at me again and again. My eyes were protected by safety glasses, but my arms took several hits. I managed to wind the blanket around Miss Stabby the anhinga’s body and hoisted her off the ground. She was much stockier and heavier than the egrets I’d rescued. I held her chest and her feet as I carried her back to where my stuff was. Her feet felt very strange. I think part of the strangeness was because I wasn’t used to how much surface area her feet took up, compared with egret feet. Anhingas have large webbed feet.

When I catch egrets and herons, I wrap them securely, making sure their wings are against their body, but not too tightly, because I want them to be able to breathe comfortably. Miss Stabby would not stop fighting. She would not put her wings together. She would not stop striking at me until I managed to get the blanket over her head. Then I watched, horrified, as her head moved under the sheet, trying to find an opening. I was outmatched!

Earlier in my visit I had picked up a small abandoned egret chick and put her in the Birdie Bag. I considered just holding the egret chick and putting Miss Stabby in the Birdie Bag, but I thought that Miss Stabby was so feisty that she would just wriggle her way out and make a run for it. The only thing I could think of was to retrieve the cardboard box I had in the trunk of my car—the Birdie Box—and get the anhinga into it so I could close the top. Miss Stabby was still so wild, however, that there was no way I could gather up all my stuff and carry the anhinga to my car.

J R had already left, so I couldn’t ask him if he’d be willing to run out to my car and get the box. I had to temporarily leave most of my stuff on the ground again. I managed to get the Birdie Bag over my shoulder and, still holding the fighting anhinga, walked to my car and struggled to unlock the trunk and get the cardboard box out.

A minute later, just as I got Miss Stabby inside the cardboard box, I saw another juvenile anhinga hauling ass, running across the grass toward the rookery.

Well, shit! Where the hell did that anhinga come from? Was it related to Miss Stabby? How did they both get on the ground, and why was that bird so far from the rookery?

I couldn’t keep the box closed, and Miss Stabby kept striking. I finally had to get another towel and drop it over the top of the box to keep the bird inside. I gathered up all of my stuff, picked up the Birdie Box, and quickly walked back around parts of the rookery, looking for the other juvenile anhinga. I didn’t find her.

At Rogers, they looked over Miss Stabby. She was a little skinny and too young to be out on her own—she hadn’t developed all the feathers she needed for flying—but she was otherwise in pretty good health.

I made sure to get some pictures of her while she was in the Birdie Box at the rookery, because when on earth would I have the opportunity to rescue another juvenile anhinga? 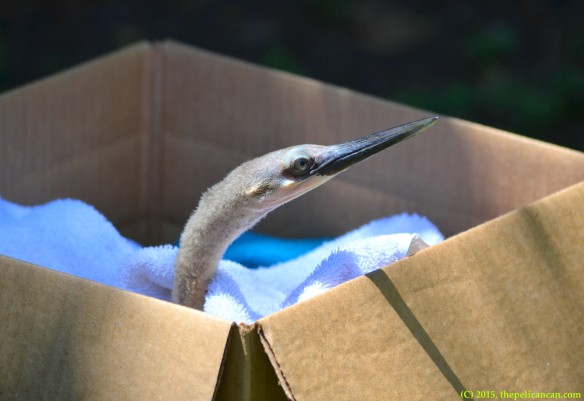 Miss Stabby the anhinga peers out of the Birdie Box.

She glowers like a supervillain. Just what were you plotting before you wound up on the ground, Miss Stabby? 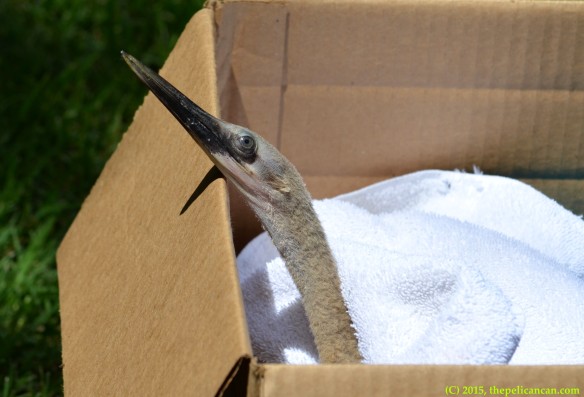 YOU’LL GET NOTHING OUT OF ME, HUMAN. NOTHING! 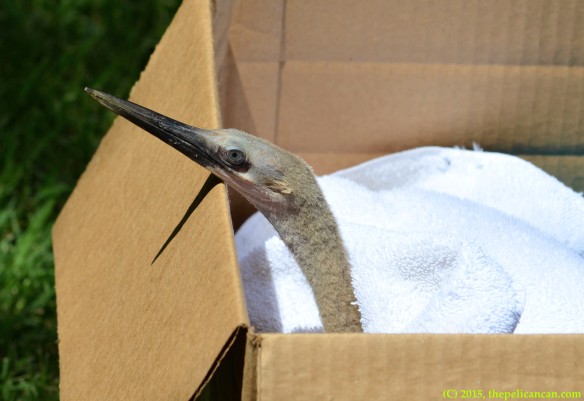 YOUR BOX SHALL NOT HOLD ME! VIVA LA BIRD! FREEDOM!

The next day, Q and I went to the rookery together. We were almost ready to leave when I spotted another juvenile anhinga hiding among some weeds, close to where I’d found Number One and around the corner from where I saw Miss Stabby the day before. Capturing a distressed bird is MUCH easier with two people compared with one person! I was pretty sure that the anhinga was Miss Stabby’s little sister and the same anhinga I’d seen running toward the rookery the day before. Although the bird was feisty, she wasn’t quite as active as Miss Stabby. 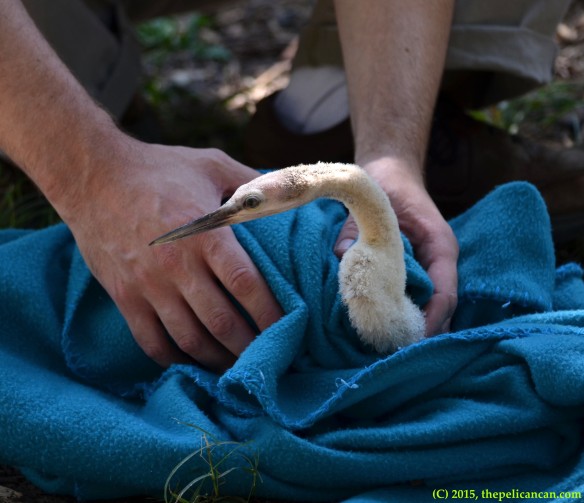 WHAT IS HAPPENING? I AM SO CONFUSED. 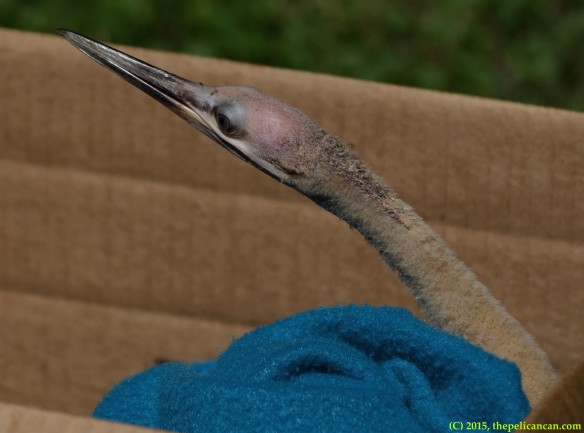 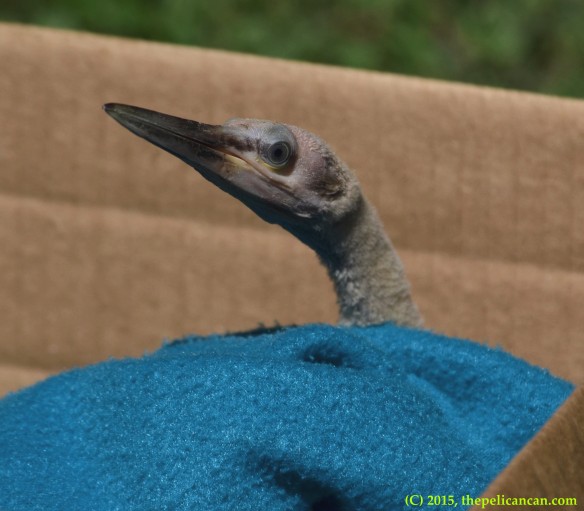 OMG! THEY’RE GOING TO TAKE ME TO BIRDIE JAIL!!! 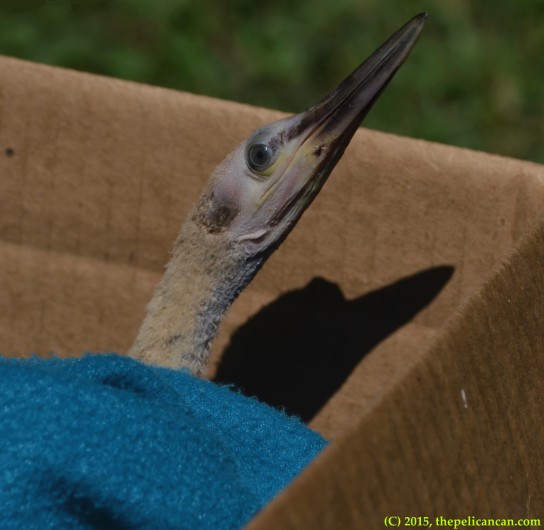 OH, THERE ARE FISHIES IN BIRDIE JAIL? FRESH WITH NO REGURGITATE? HMMM. 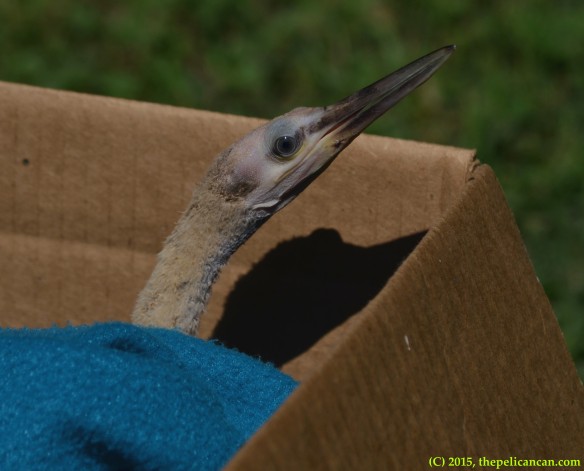 OKAY, BIRD HAS DECIDED. BIRD IS READY TO BE BOOKED INTO BIRDIE JAIL, PLS.

Sadly, Q and I learned later that one of the rescued anhingas died. We suspect that it was Miss Stabby’s Little Sister. The bird that died was apparently too emaciated to recover when we found her. I’m still glad that we picked up the anhingas and that Rogers tried to save them both. If I don’t pick a bird up at all, it will surely die unless another human intervenes. If I do pick a bird up, it may still die . . . but there is also a chance it will live, and that’s a chance it wouldn’t get if I left it alone.

Q and I went back to the rookery on Friday, July 3. We found no other anhingas in the rookery, although we did see a very small black-crowned night heron chick sitting in some mowed grass outside the rookery. It was in a section of the rookery where there weren’t any nearby nests, so I’m not sure how the bird got where she was. Regardless, I picked her up and put her in the Birdie Bag. 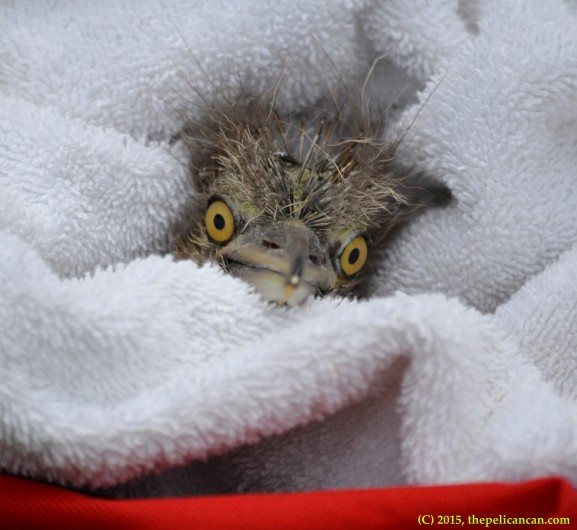 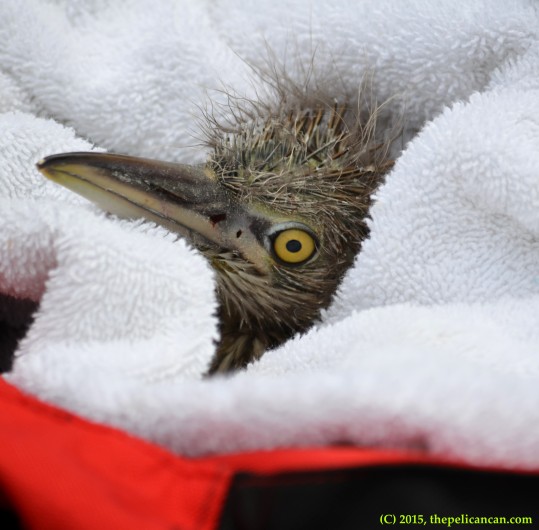 The chick was totally freaked out. Her eyes were pinning like crazy, and because her irises were so light-colored, the flashing pupils were very noticeable. 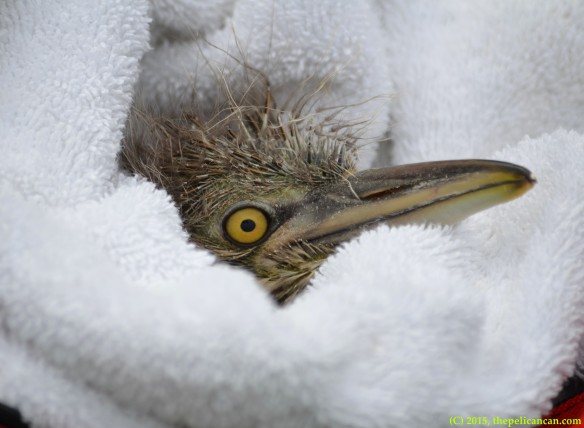 Forget the Hypnotoad; this was the Hypnoheron! 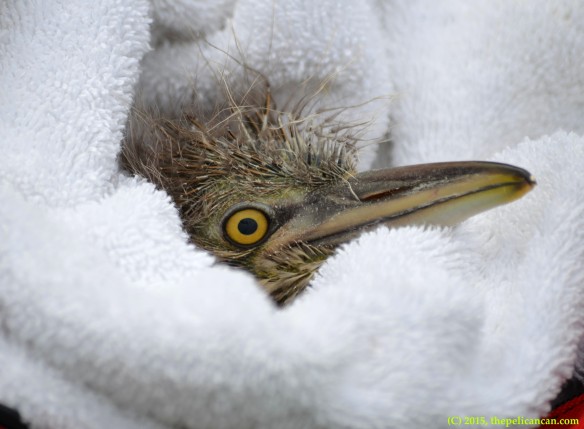 ALL GLORY TO THE HYPNOHERON! AND FISHIES.

As we were driving on the on-ramp to Harry Hines, I saw something strange and yelled for Q to stop the car. 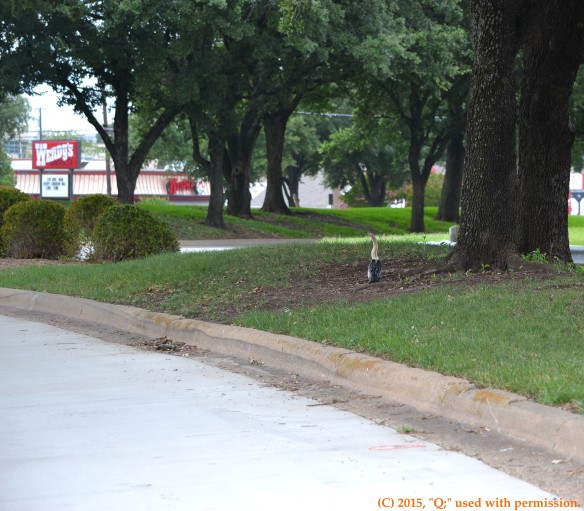 HOWDY, HUMANS. YOU HAVE FISHIES FOR BIRD? I WILL BE ADORABLE BIRD FOR YOU IN RETURN FOR TWO TASTY FISHIES.

Perched up on a traffic island to the right of the on-ramp to south-bound Harry Hines was a juvenile anhinga. She looked about the same age as Miss Stabby’s Little Sister.

There was no pull-off, but because there was no traffic behind us, Q backed up and pulled over as far to the right as he could. The on-ramp was extremely wide, and cars could go around us without trouble. We grabbed our protective glasses, blankets, and the Birdie Box. I walked up onto the island and snuck up behind the Harry Hines anhinga while Q waited in the street. The Harry Hines anhinga became extremely agitated as I closed in on her. She ran out into the street, where Q caught her and carried her back to the island for wrapping and placement in the Birdie Box. 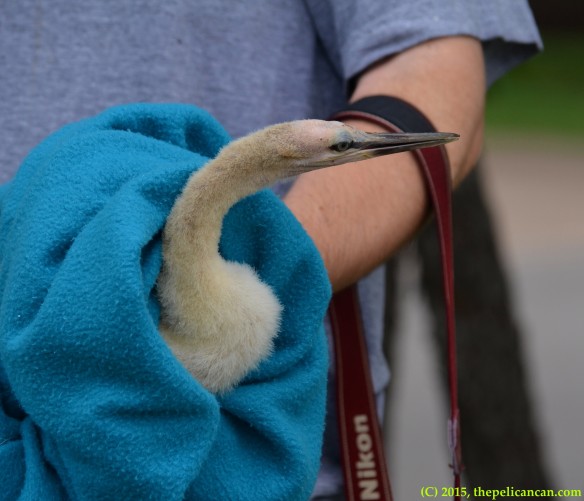 Q holds the Harry Hines anhinga after her capture in the street.

I AM SO ASHAMED YOU FOUND ME ON HARRY HINES. I JUST NEEDED FISHIES SO BAD. HUMANS DO IT; WHY NOT BIRD? 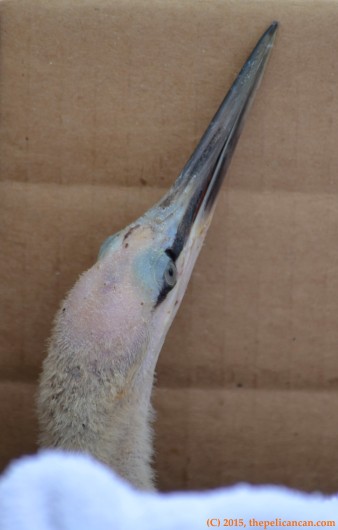 Luckily, the juvenile was offered and accepted placement in a court diversion program to serve the remainder of her sentence at Ms. Rogers’ Finishing School for Wayward and Troubled Birds.

I don’t know if the Harry Hines anhinga survived—almost immediately after we dropped her off, Matt Leatherwood tried to feed her a nice big fish. I hope she did live, and I hope the other juvenile that survived is doing well. One of the workers at Rogers said that Miss Stabby, the anhinga that probably survived, was quite “sweet.”

Last year when I was bringing rookery birds to Rogers, I often spoke with a woman there who joked that I should bring them an anhinga. She said they used to have an anhinga named Charlie, who could not be released. Charlie was a very long-lived bird, and although they had offers from zoos and other places, they refused to give him up because he was such a sweet bird. If that woman is still working at Rogers, I haven’t seen her this year, but I would love for her to know that I finally brought them her hoped-for bird.