Early July was actually pretty good for nearby birding. The ibis juveniles were still at the UT Southwestern rookery, along with a few very rapidly maturing black-crowned night heron juveniles and Giant Egret Babies. For me, the best birding was suddenly seeing yellow-crowned night herons off-and-on during the day for two weeks at White Rock Lake, and I would almost always see a great blue heron hunting near the spillway. Usually the great blue would be on the spillway steps, but when I stopped by on July 3 after a trip to the rookery, no birds were there. Instead, two men were crouched on a concrete embankment beyond the fence, fishing. They had frightened away all the birds.

(Hey, Dallas, as you’re so unbelievably broke, why not bring in some money by simply enforcing your laws about not fishing over bridges at the lake and not hopping over or crawling under fences to trespass onto land to fish? I saw someone doing that every day I was at the lake during the summer. Often more than one person.)

I thought that there might be some birds further up, so I pressed on and crossed the bridge. I continued walking along the edge of the water, peering through the fence. Only a little past the bridge, I saw a great blue heron standing in some water just behind a small island of trees and concrete chunks. She had probably been hunting in the spillway when the fisher intruded, and, luckily for me, she had barely flown out of the way.

I didn’t know it, but I had just glimpsed the bird who would become the most successful hunter out of all the birds I’ve watched: Edwina the great blue heron. 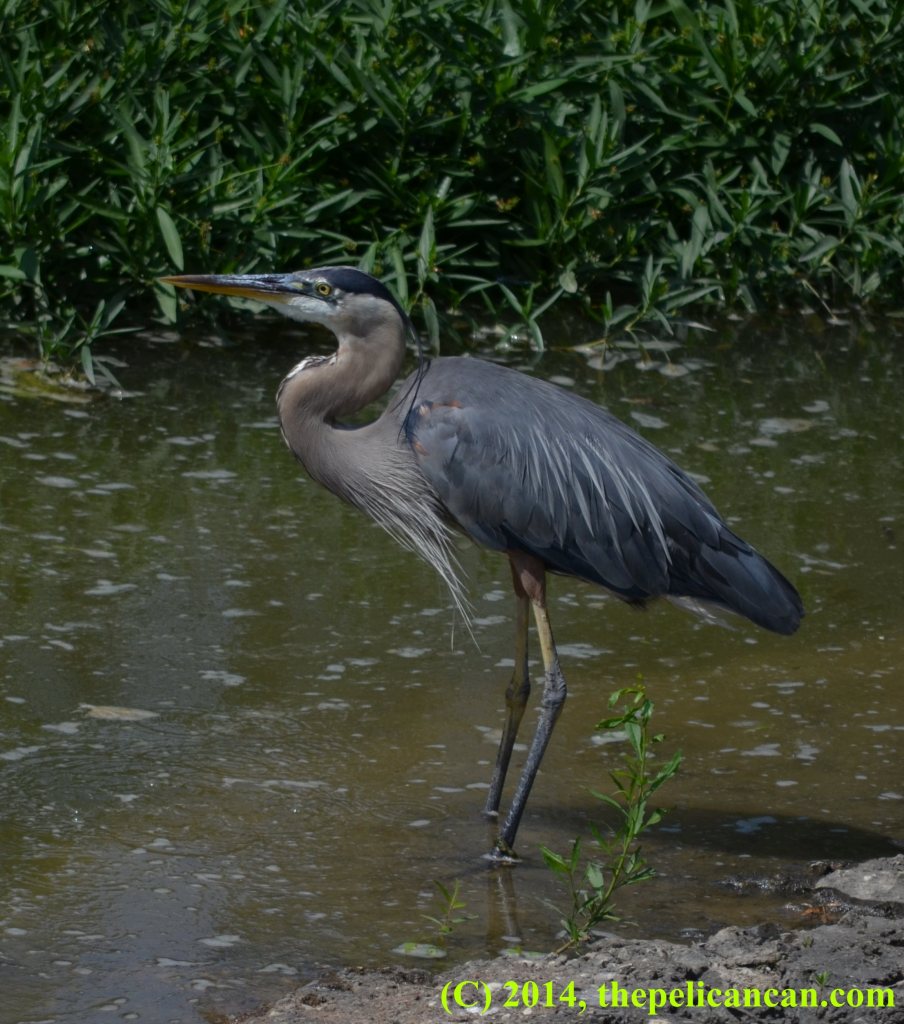 I crouched down next to the fence and watched her. She was sipping water, and later I realized that she had probably just finished eating a fish. At the time, however, I didn’t know what she was going to do or where she might go, so I waited. After slaking her thirst, she walked onto the concrete island and hopped down into a section of grass and reeds that faced a small channel of water. That bird was ready to hunt!

She walked to the edge of the greenery and crouched, readying herself for a strike. When the strike came, it was totally unlike what I’d seen in the past. 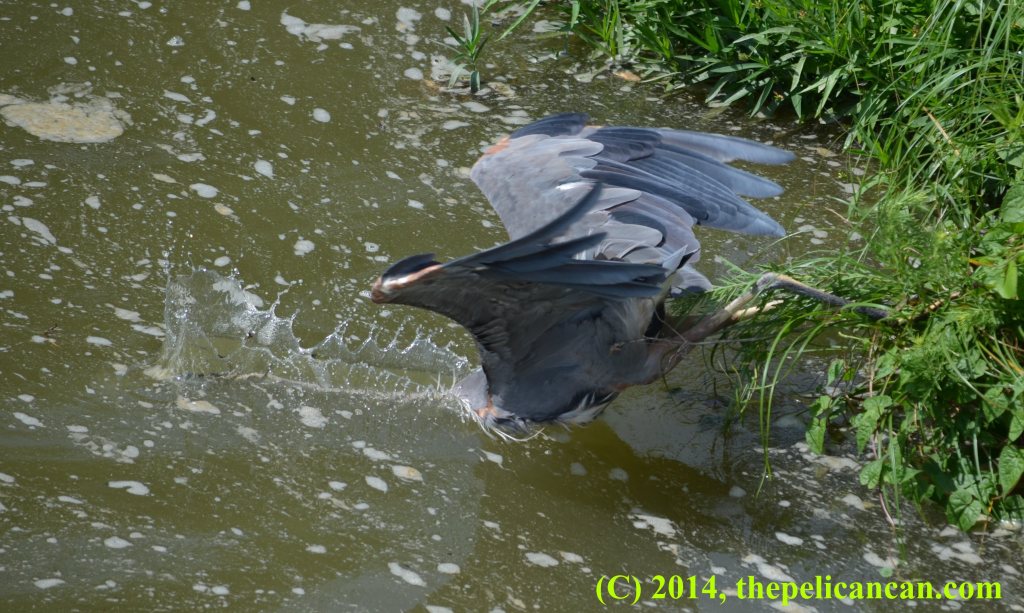 Something happens, and I’m head over heels . . .

Edwina was clinging to the foliage with her feet to anchor herself, but the forward momentum of the strike was so great that she was unable to maintain her footing and tumbled all the way into the water. 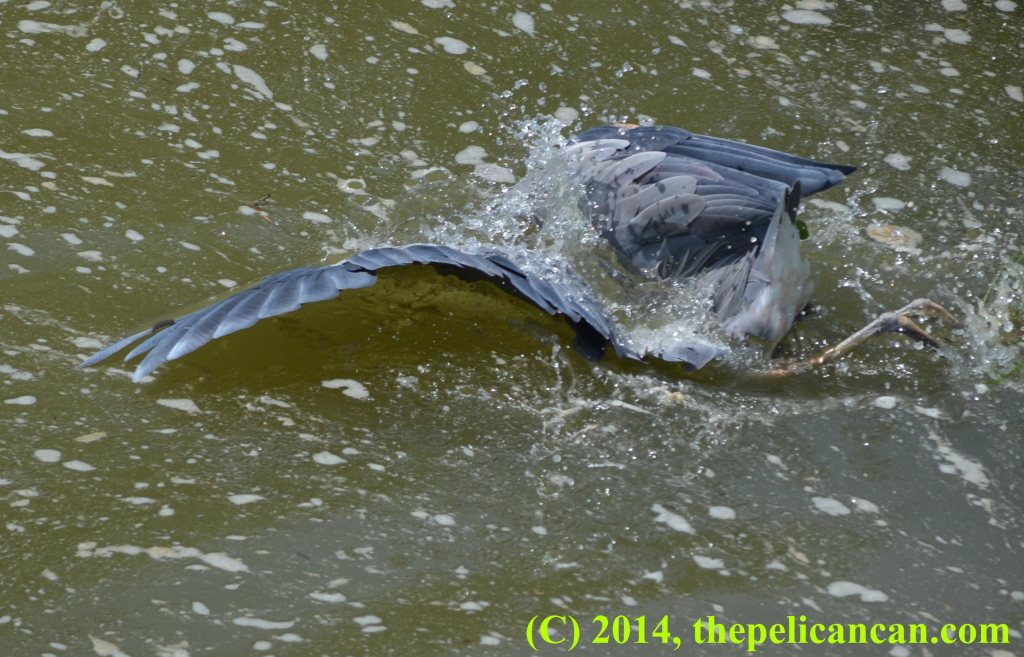 I never find out ’til I’m head over heels. 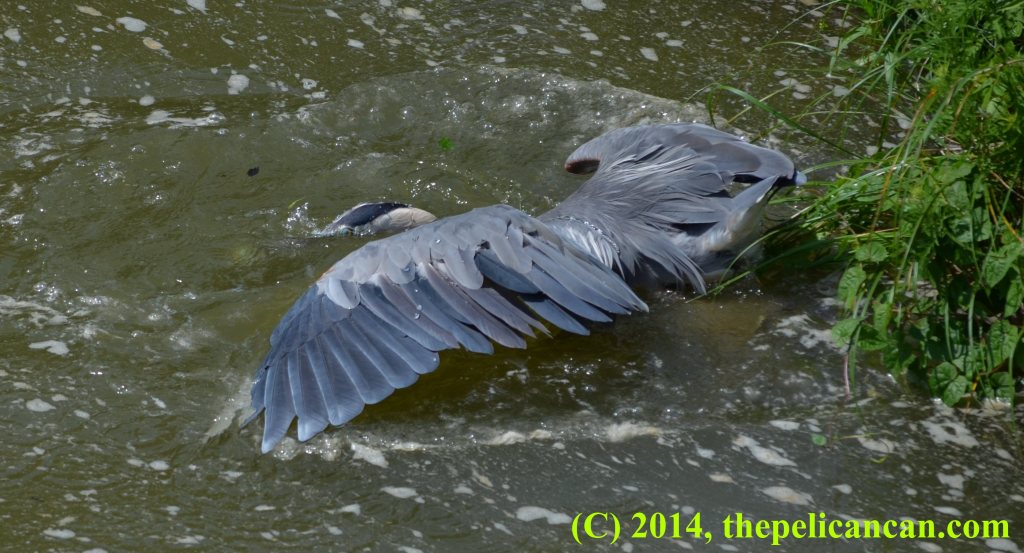 Wait, am I supposed to be swimming or hunting? 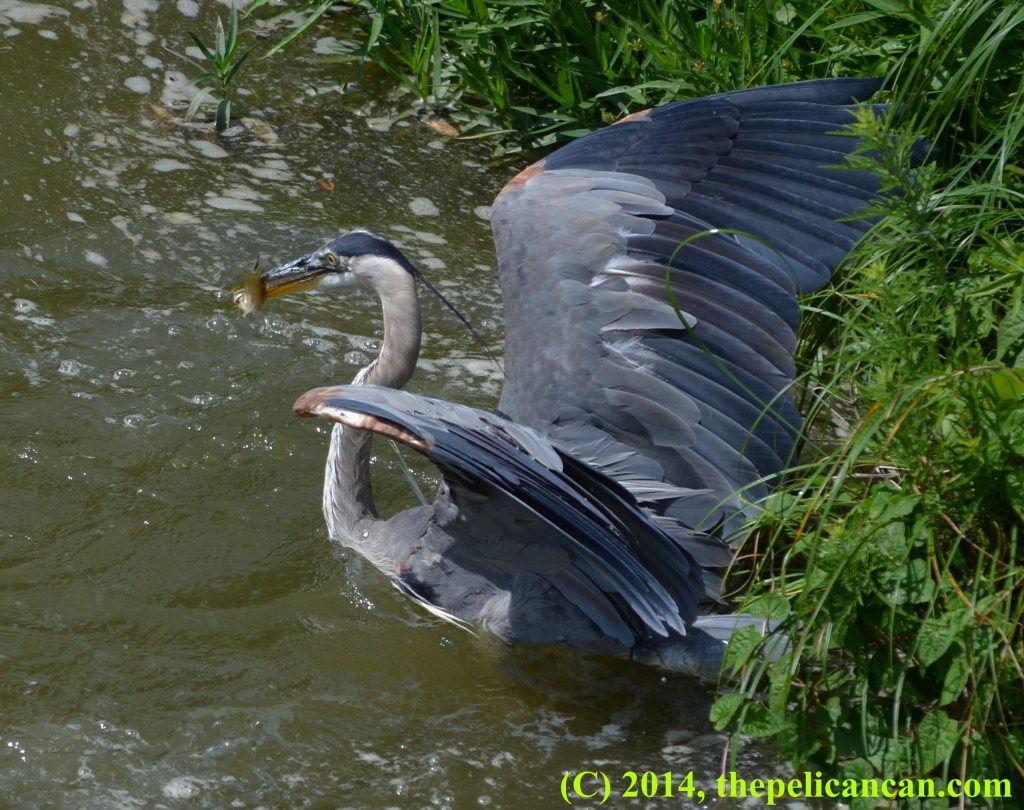 Later I would see herons falling into water while striking at a fish, but watching it happen for the first time with such a large bird simultaneously astonished me, cracked me up, and made me feel somewhat protective of her. 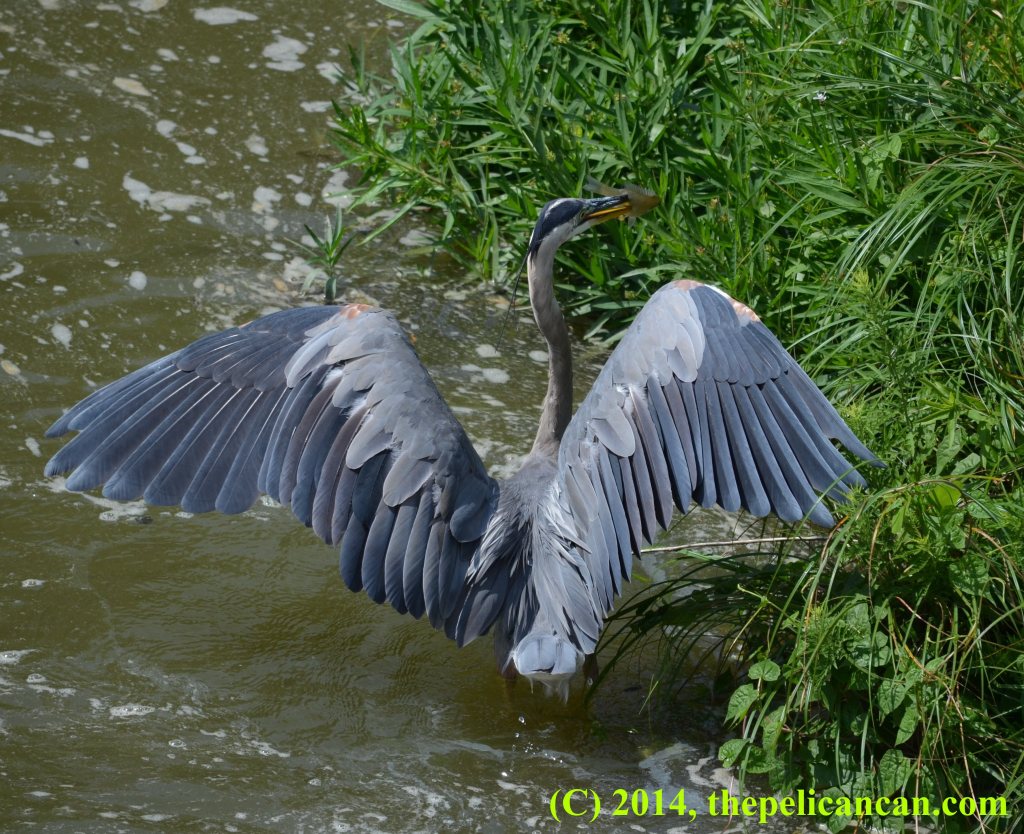 Q saw this picture and said, “It would be beautiful to paint a room the colors of a great blue heron’s feathers, but it would be difficult to get the heron to come to the paint store with us so we could compare the feather colors to the paint samples.”

She climbed back up into the greenery and hopped onto the concrete island, still holding her fish proudly aloft. 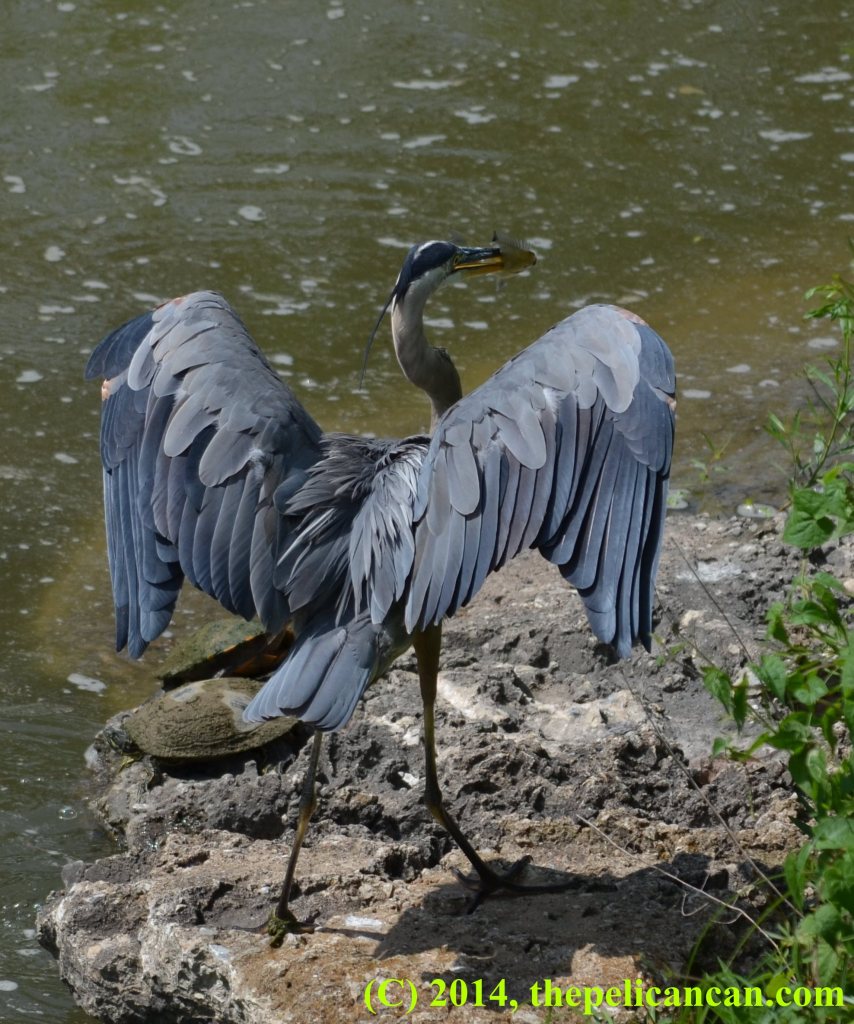 DON’T WORRY, FISHIE; I WILL TAKE YOU TO A SAFE PLACE WHERE YOU CAN SWIM HAPPILY . . . IN EDWINA’S STOMACH! HA HA HA, I AM SO FUNNY. I LOVE ME. 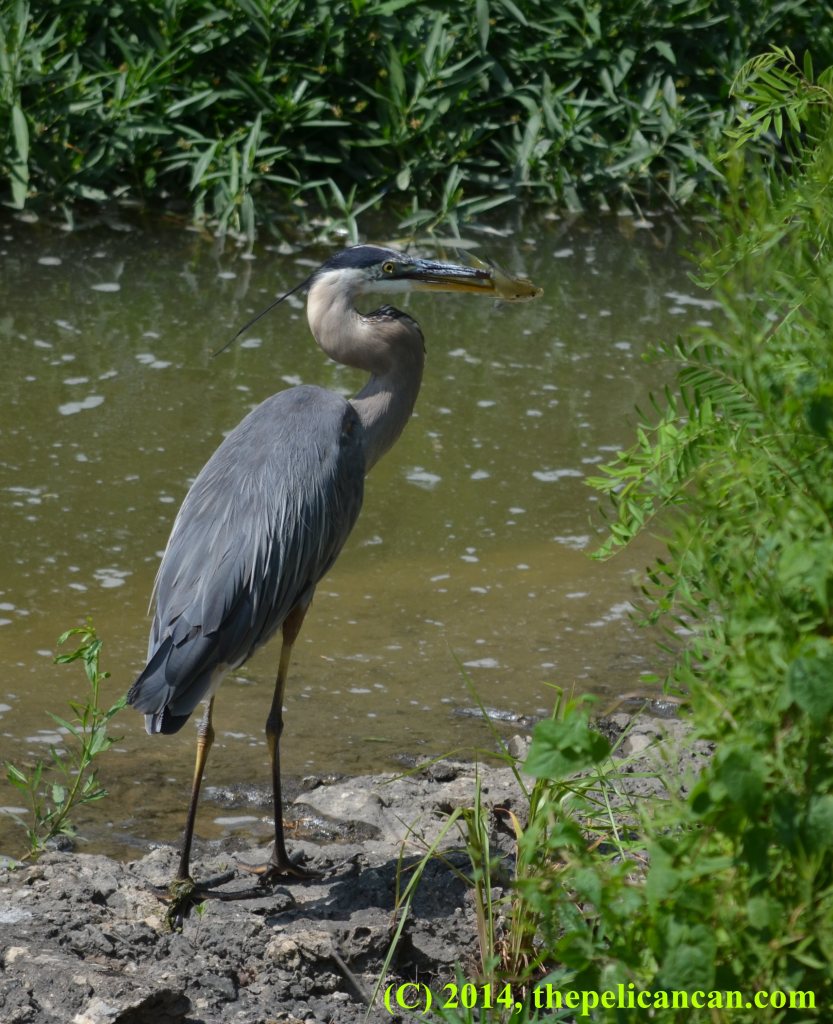 She let the fish wriggle in her beak for about forty-five seconds before she gobbled it down. She sipped some water, then made her way back to her hunting spot. 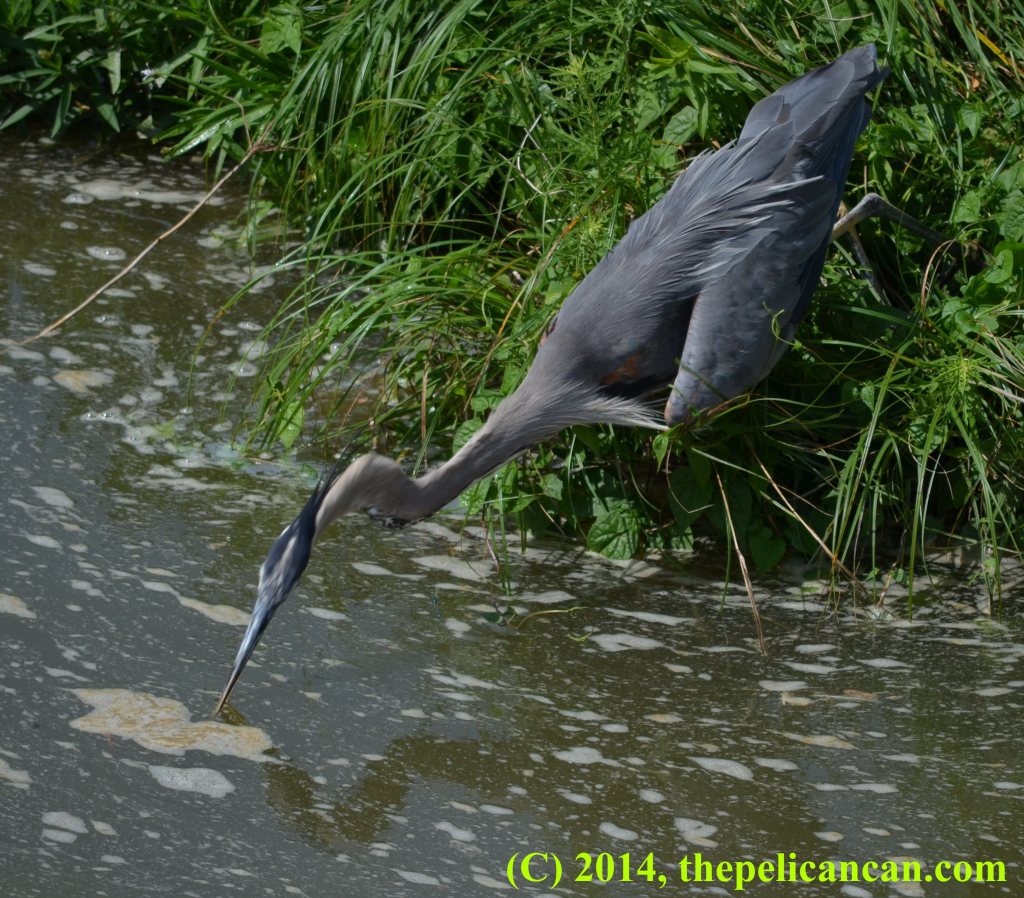 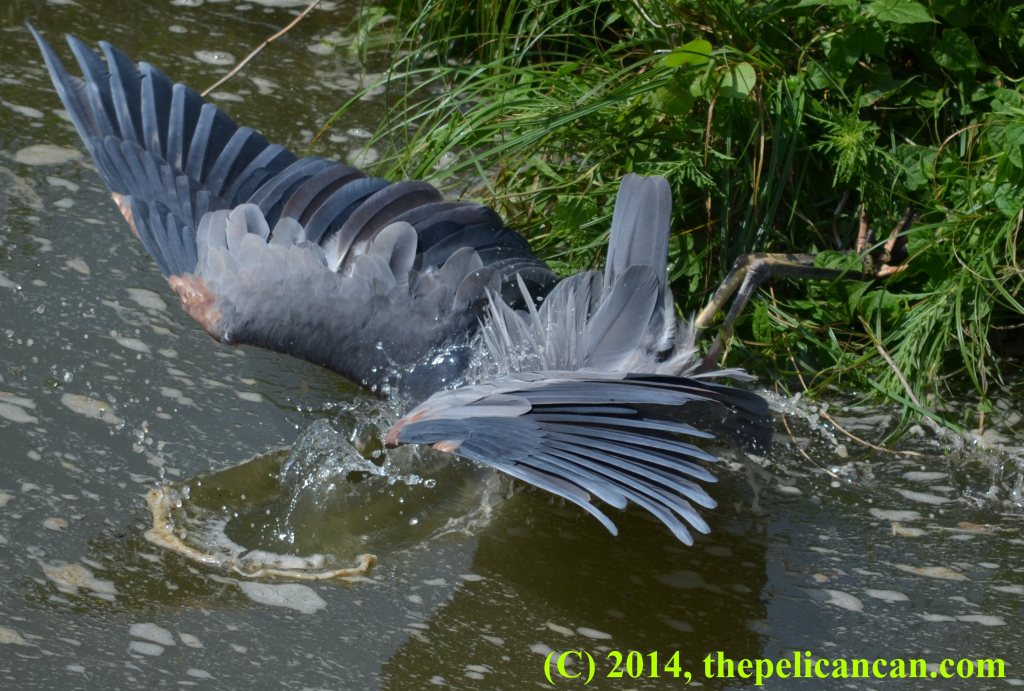 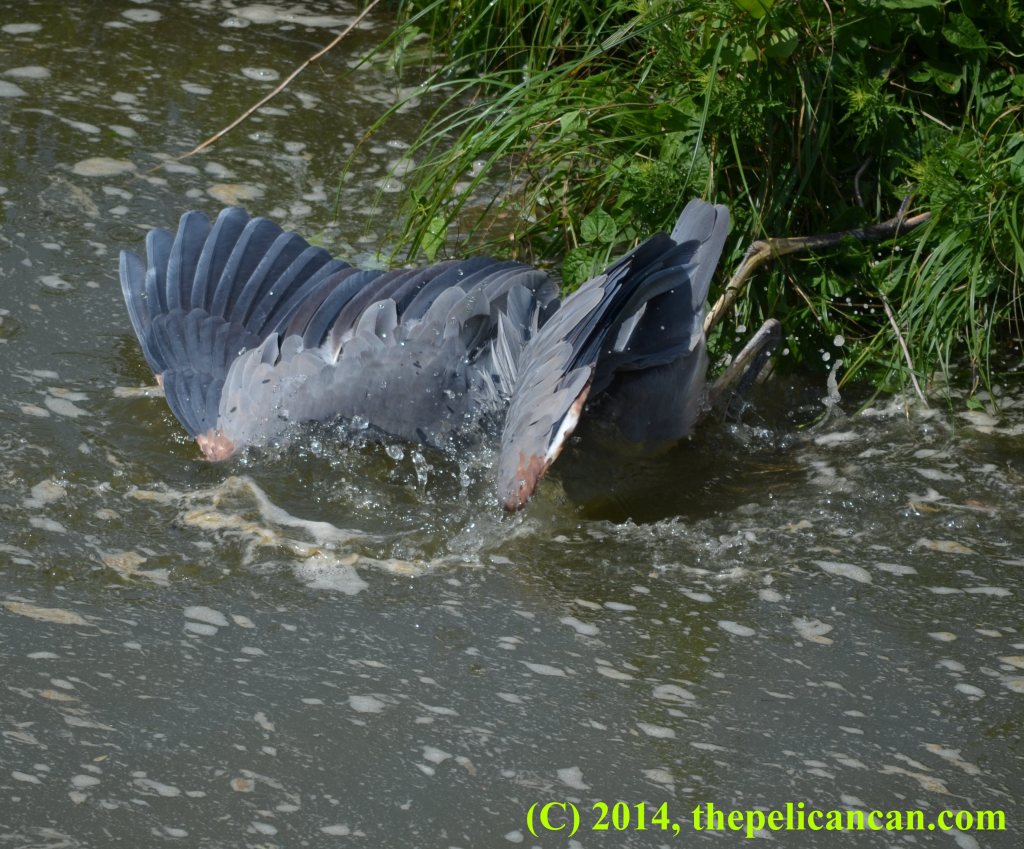 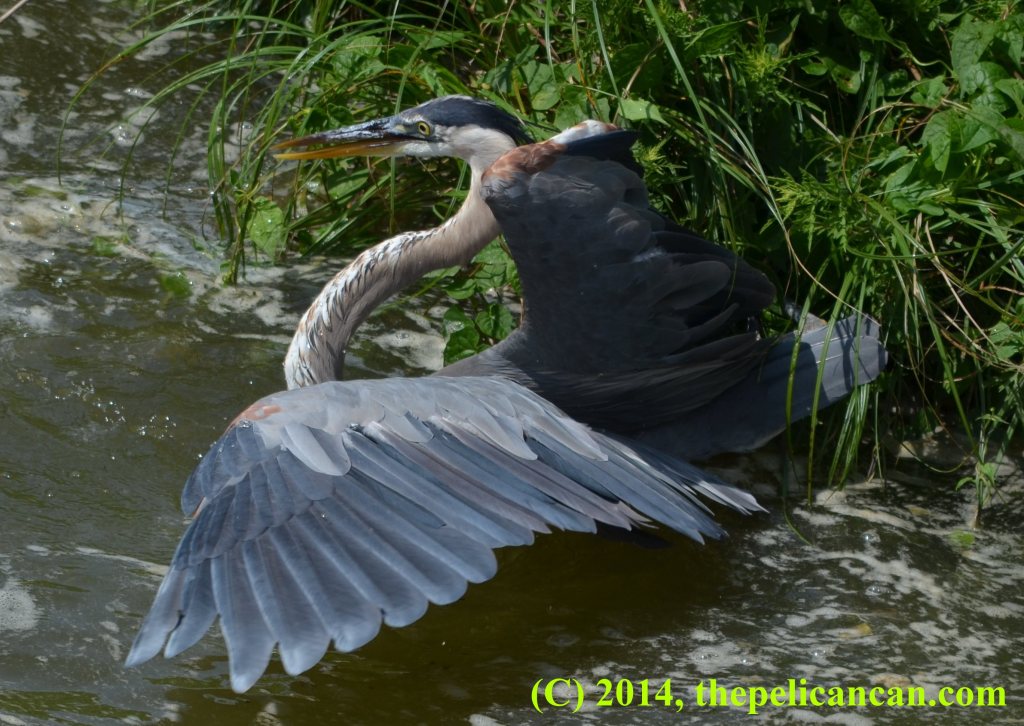 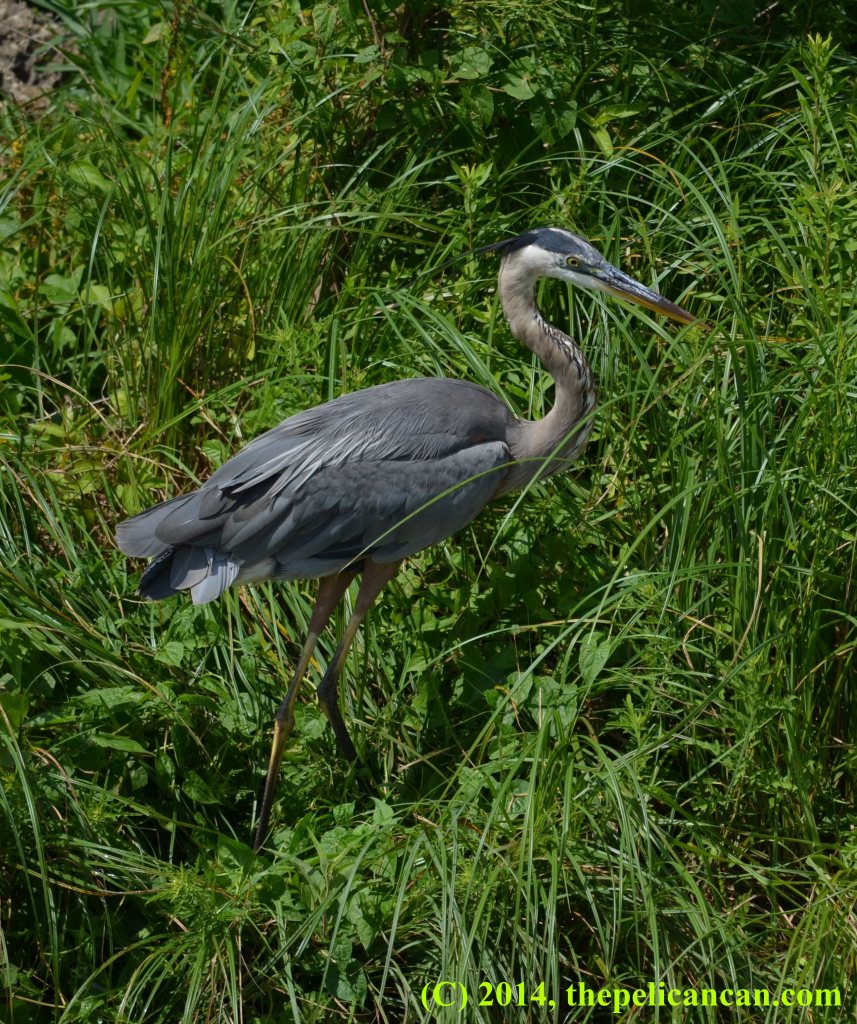 Edwina didn’t let the miss get her down. She got right back down at the edge of the water and struck again. 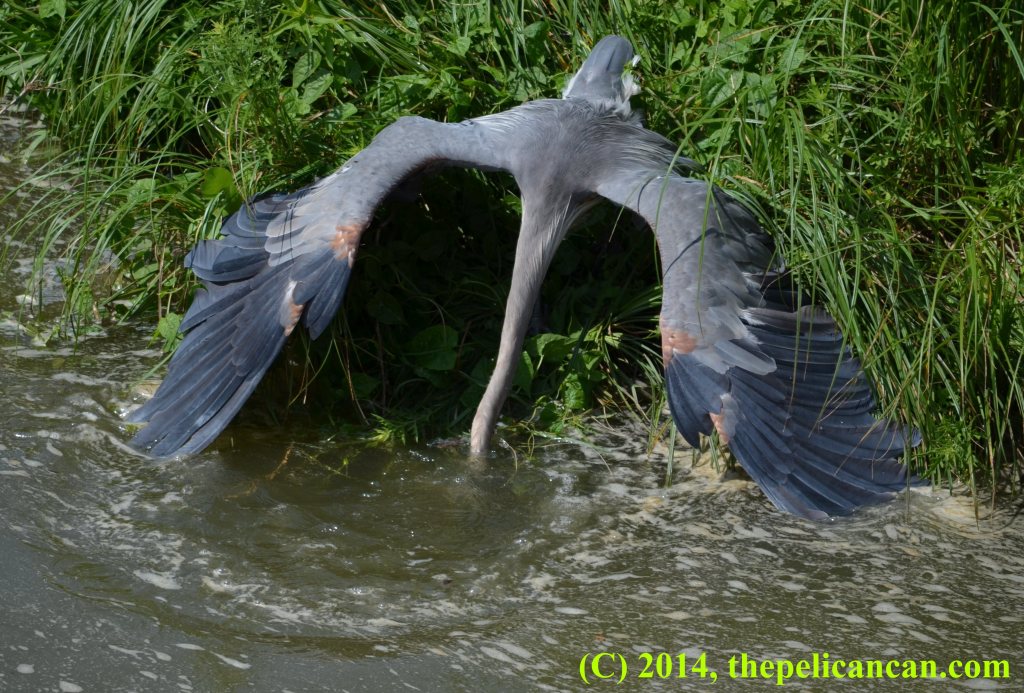 Her neck looked like it kept stretching out longer and longer as she pulled her head out of the water. 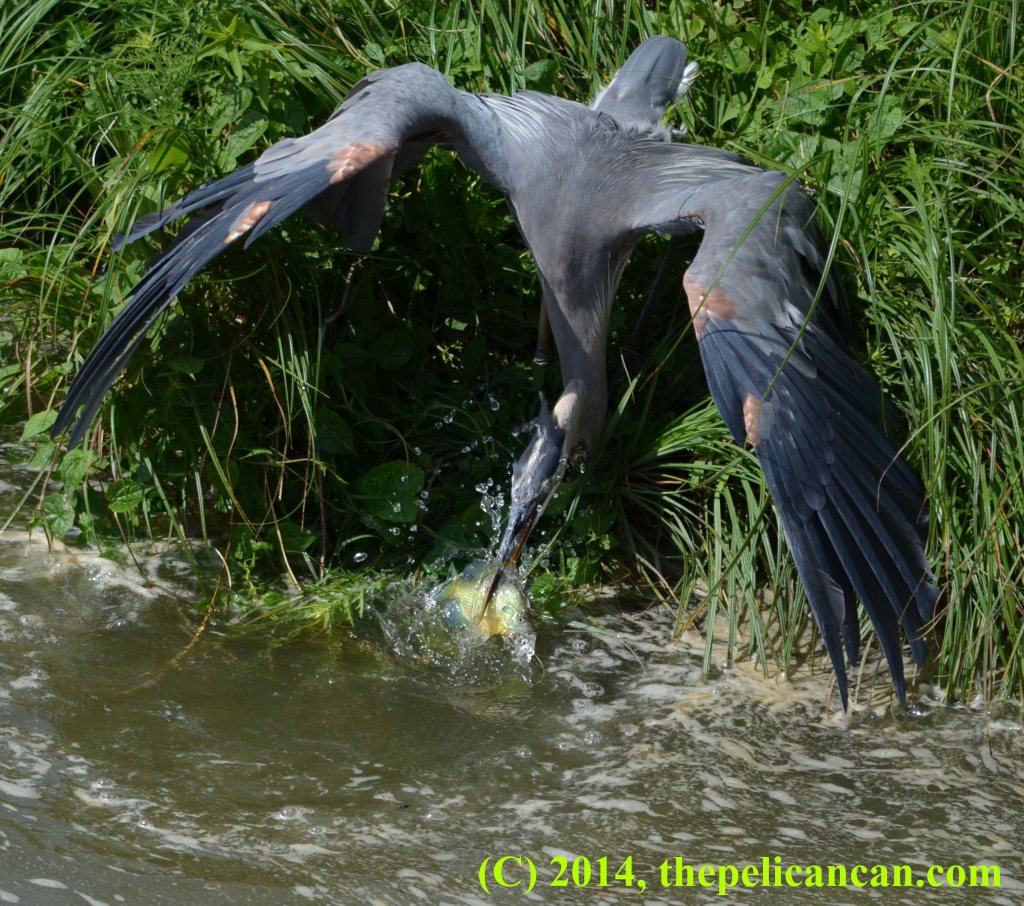 She carefully regained her balance while keeping a hold on the sunfish. 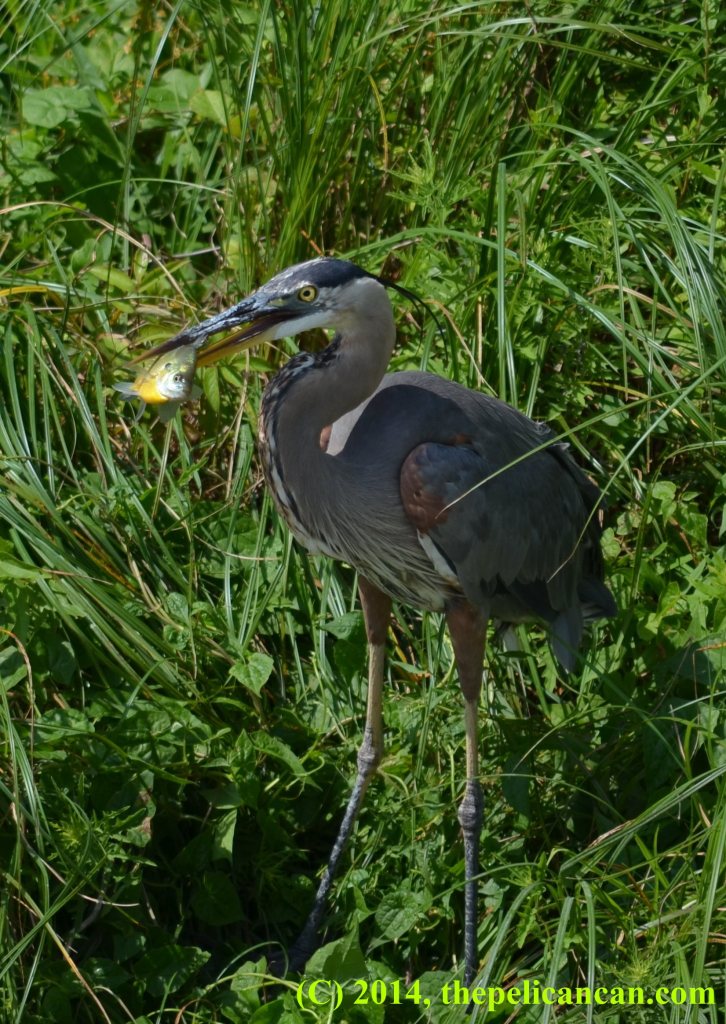 Then Edwina raised her foot up by the fish. I got very excited, because I’d never seen a heron use her foot to manipulate objects in her beak. But I was wrong: Edwina was using her foot to scratch her face while she held the fish. 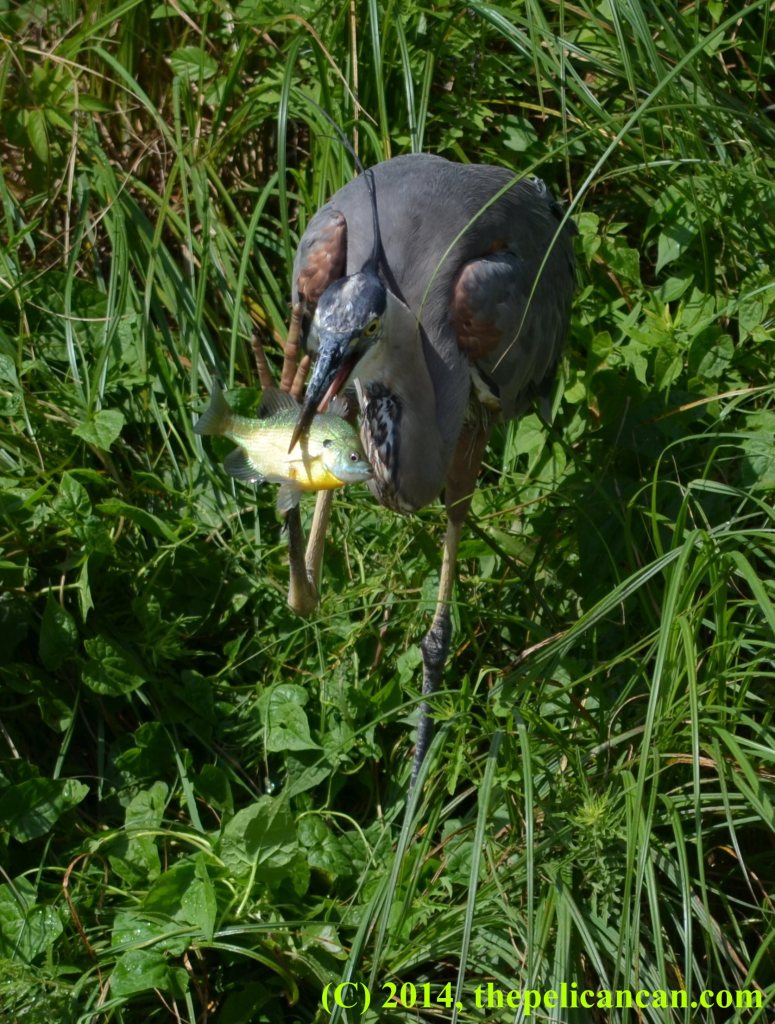 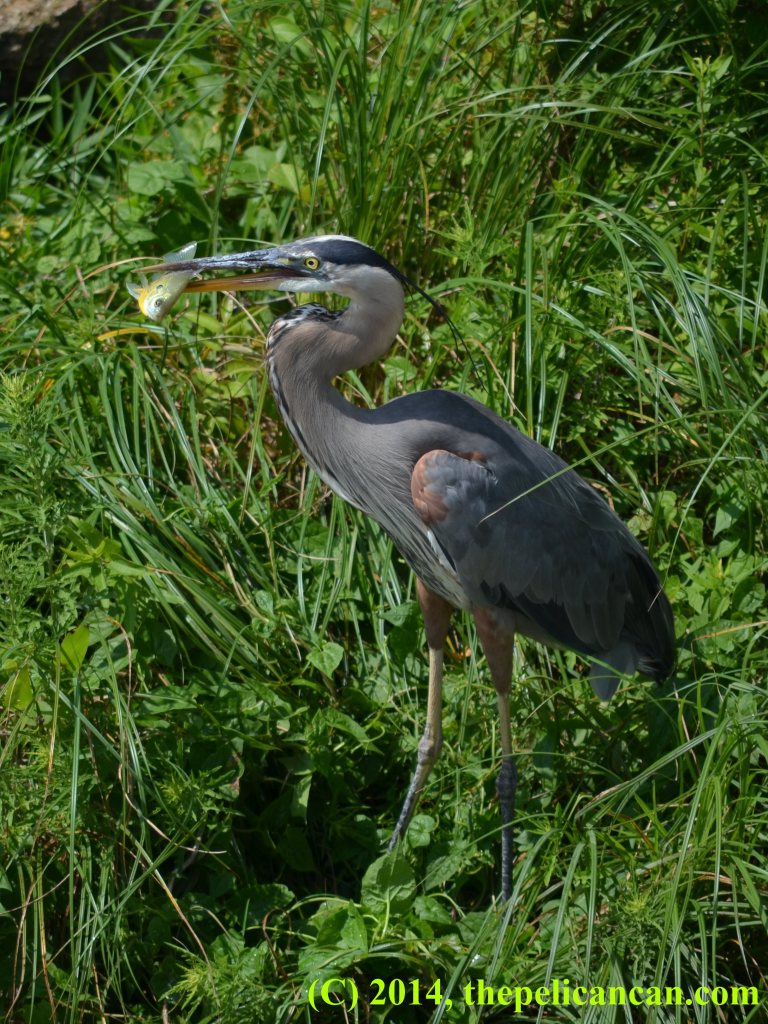 Then she turned away and took her fish back to the concrete island to devour it. 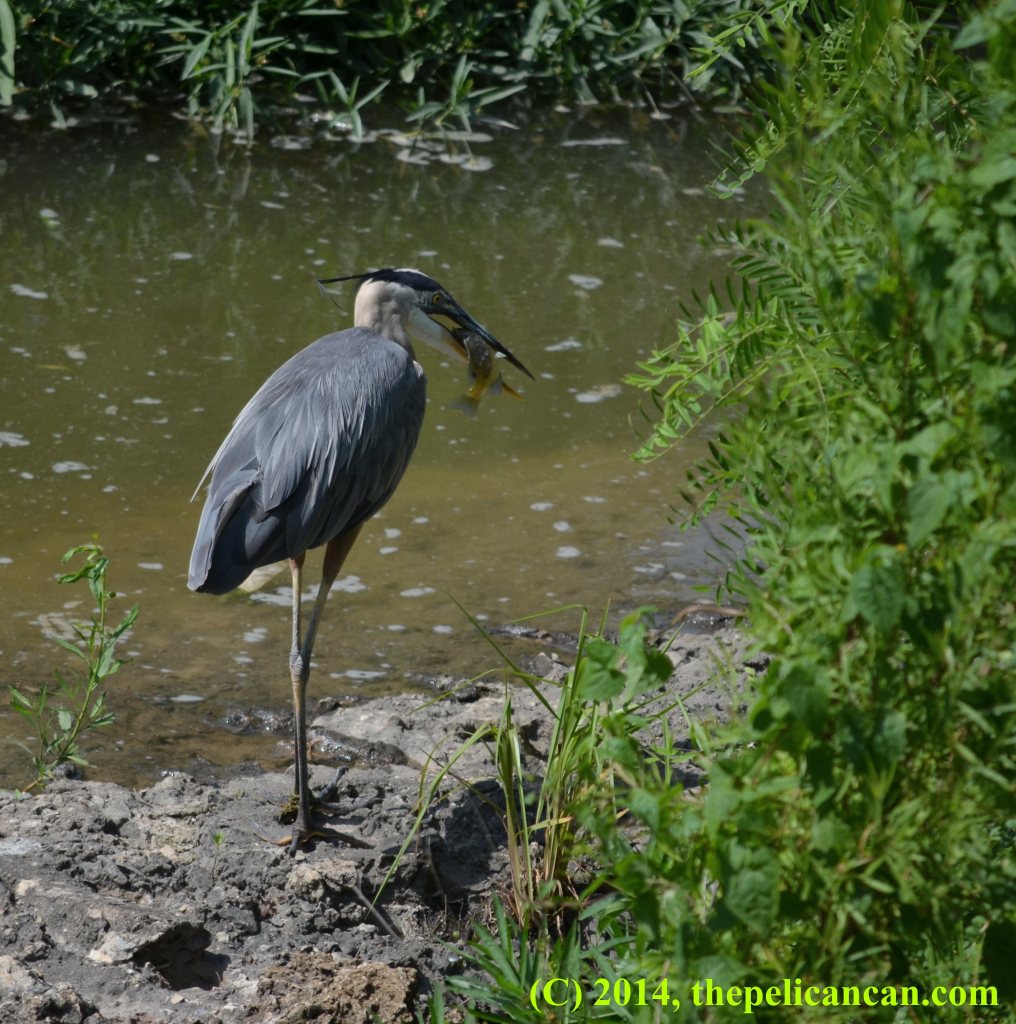 Again she took a few ceremonial sips of water.

And again she returned to her hunting spot. 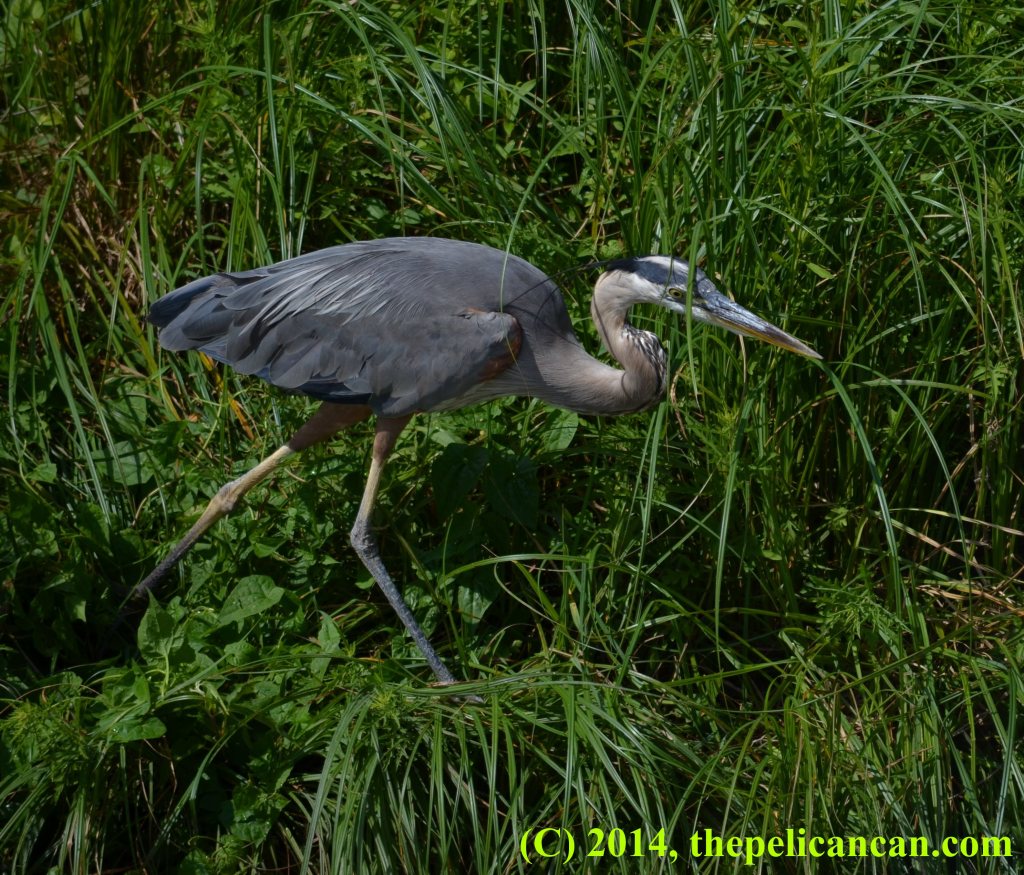 Better run through the jungle.

And again she dove for a fish. 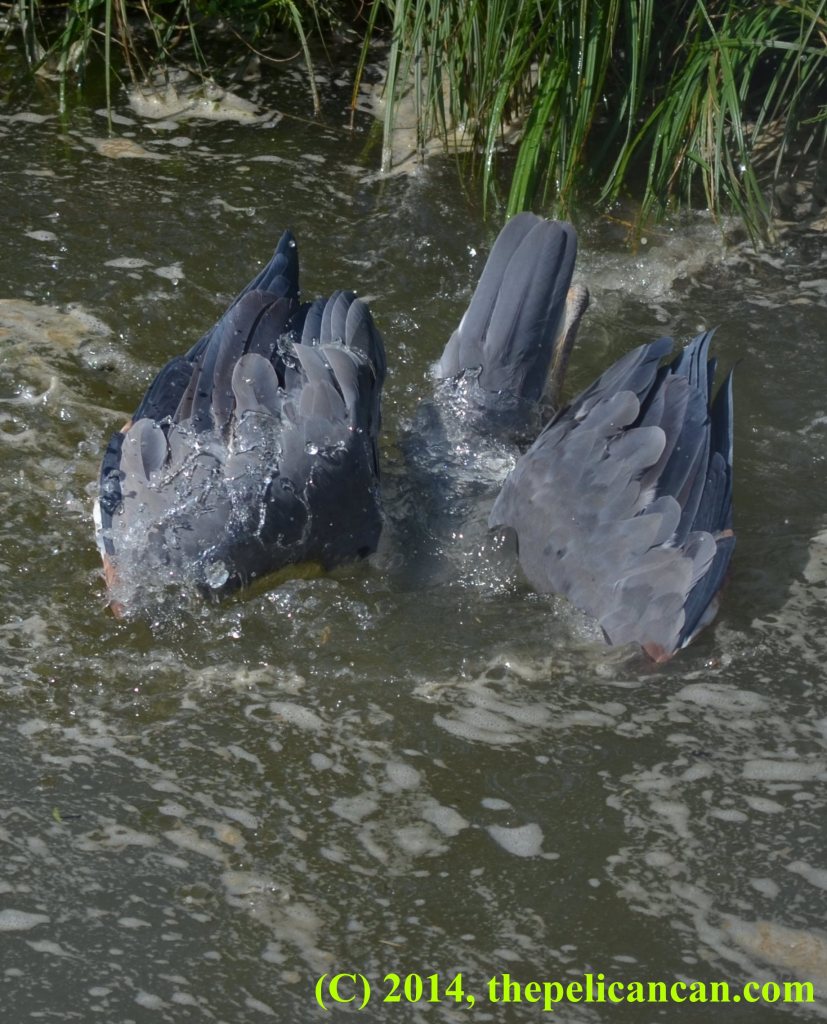 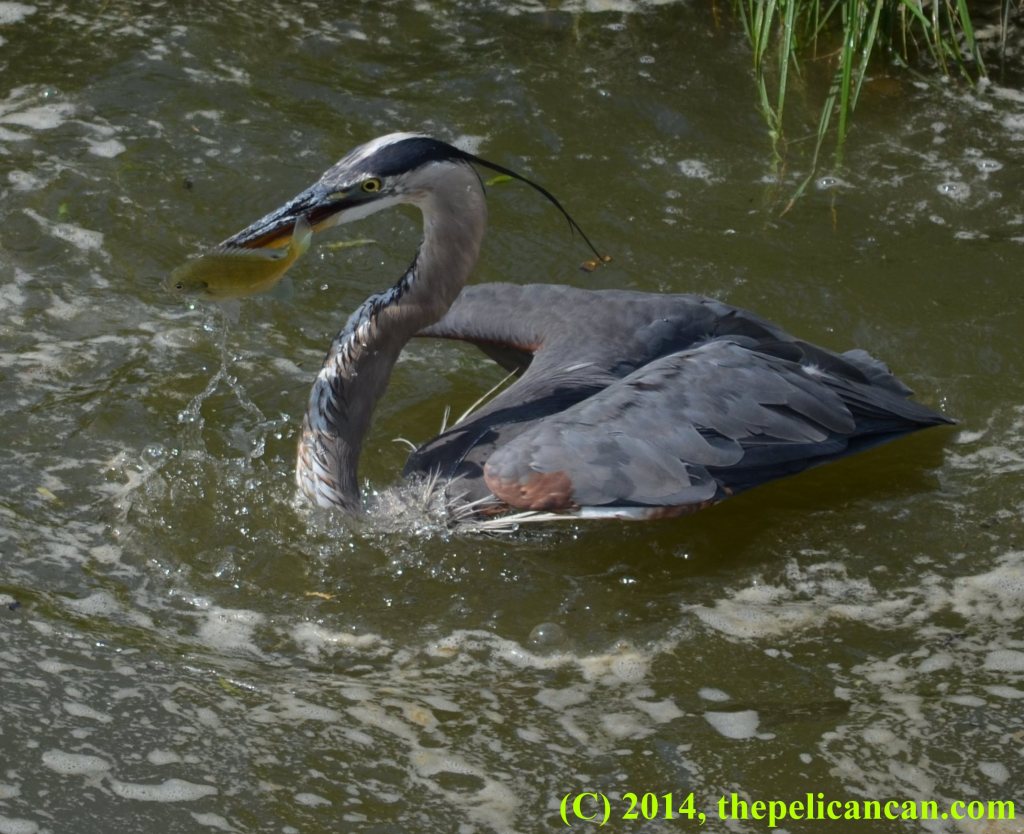 So give me fishies, and make ’em one, two, three. I will eat them; they will satisfy me.

Can you guess what happened next? 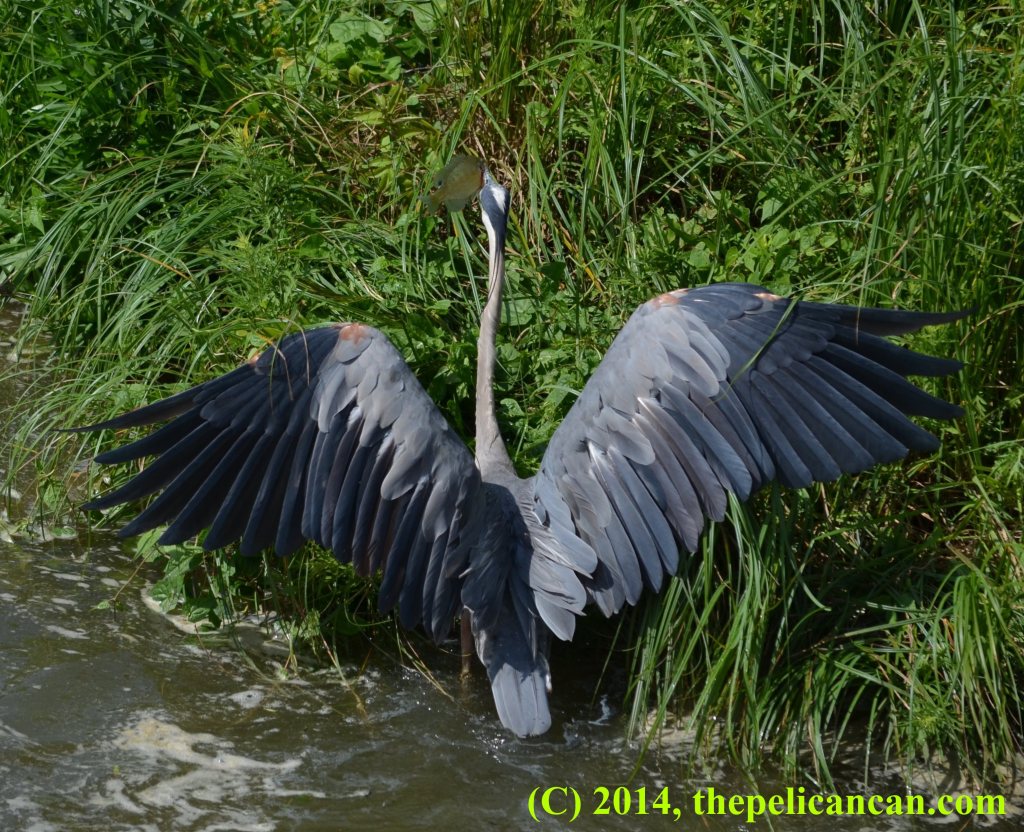 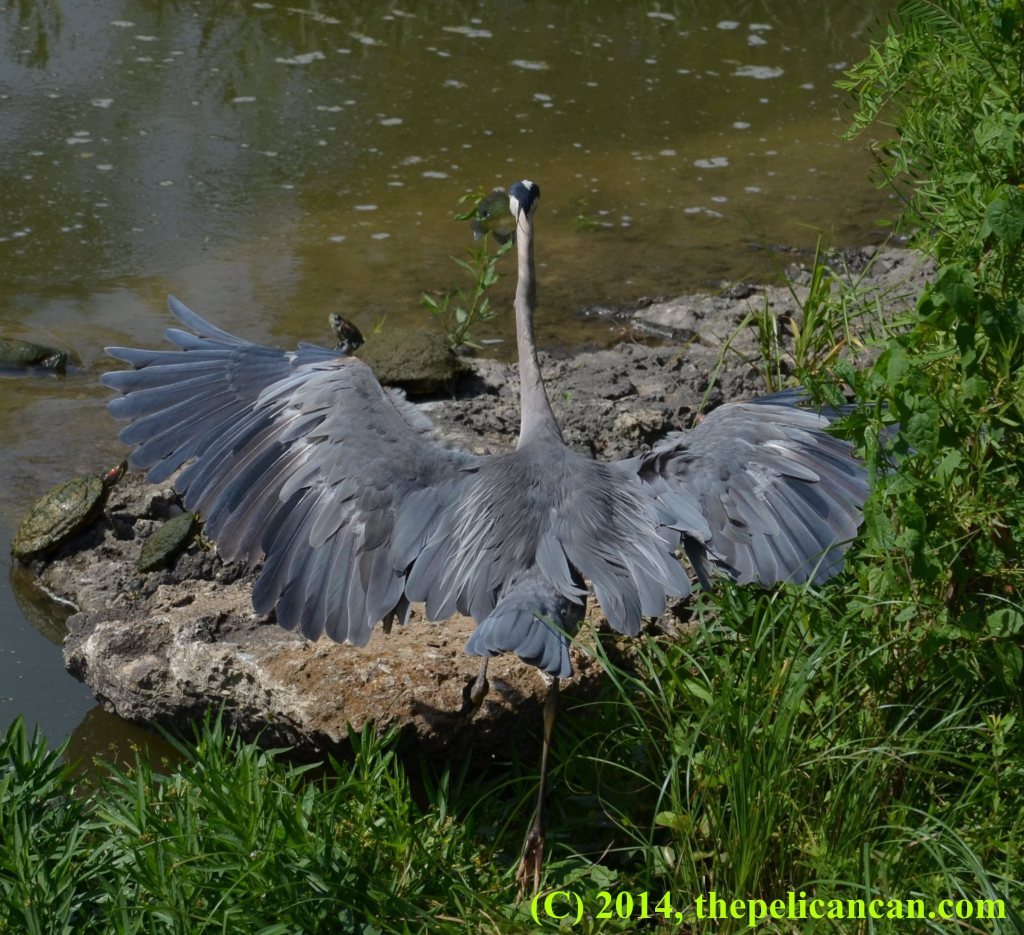 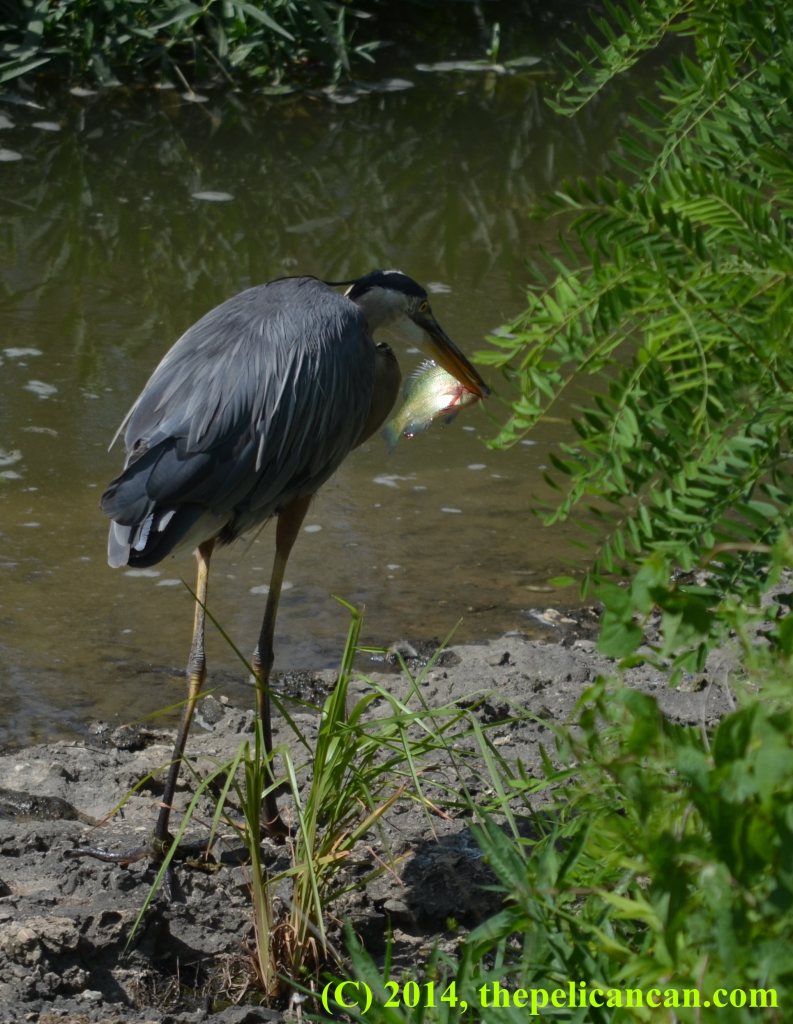 Three fishes caught and eaten! And again she returned. 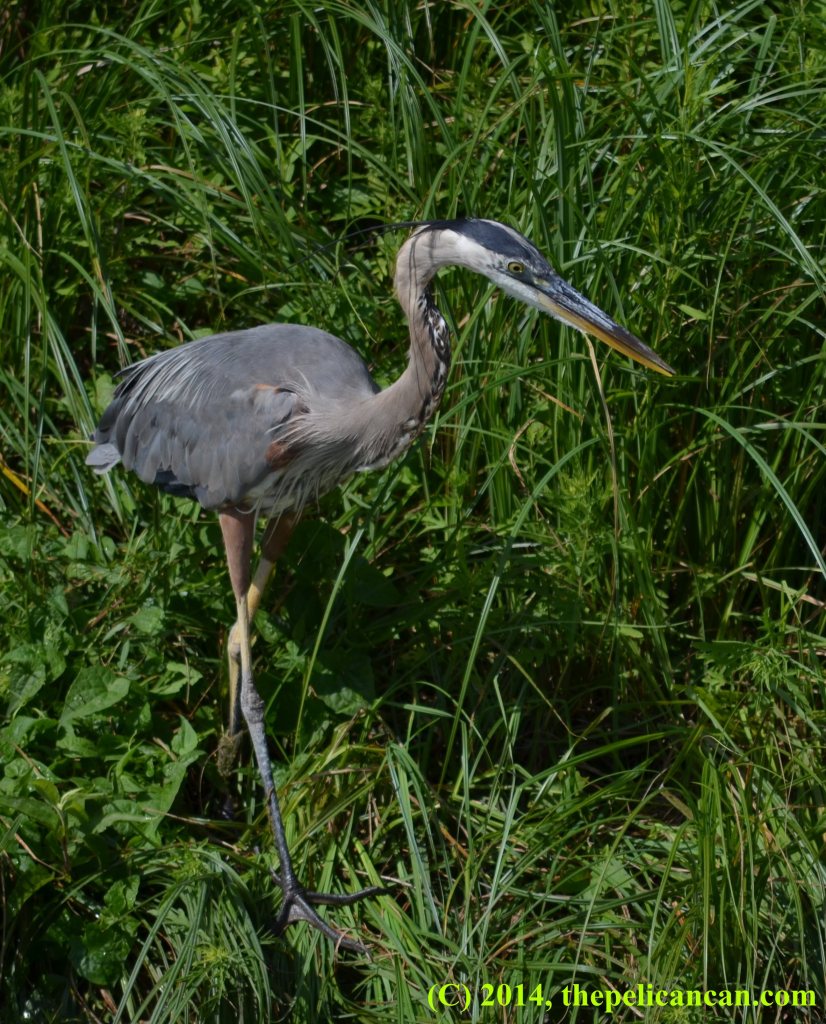 She was obviously going for a fourth fish, but I’d been watching her for about forty-five minutes and thought I’d seen plenty. I decided to let her hunt without a human peering down at her.

As I stepped back onto the bridge to leave, I looked down at the concrete embankment where the human fishers had been and saw that a much more appropriate fisher had taken their place. 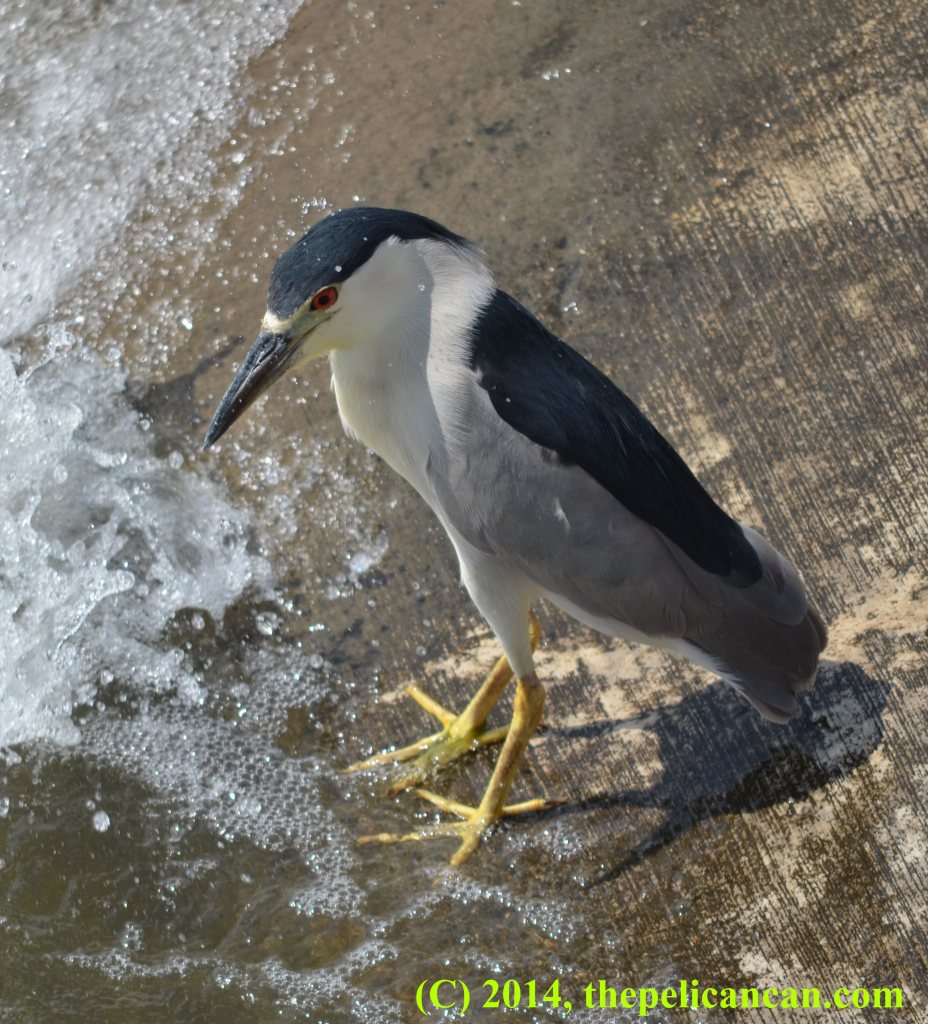 But before I left, I got Edwina to agree to participate in a brief Q&A for humans who may be interested in her life.

What kind of fish is the best type for great blue herons to eat?

If you could eat any kind of fish right now, what kind would you choose?