K and I were hanging out at Sunset Bay, near the shore log, at White Rock Lake on Sunday afternoon. We were hoping some pelicans would fly in. The majority of the pelicans that were already there were crowded together in the marshy spit, where all they could do was preen and occasionally jab at each other if another bird annoyed them.

Geese started climbing out of the water. As K and I backed up to make room for them, we noticed a small white bird that was standing on the shore near a group of coots. It was almost entirely white except, like a pelican, for black flight feathers. Its throat was furrowed like Mister Mary Mack’s, which made me think it was a goose. But it was so small! It was only a little larger than a coot.

The bird had a very high-pitched chirp. K wondered it it were a juvenile of some type. I didn’t think so; although the bird was small, it didn’t have the awkward look of some juveniles, like the teenaged White Rock Lake geese.

When the mystery bird went into the water again, it spent most of its time around the geese.

I went home to get Q. I checked my bird books and decided that the bird had to be a Ross’s goose, although the bird I saw seemed smaller than the typical size indicated for a Ross’s goose. But it could be nothing else. Later I read that females tend to be smaller than males.

By the time Q and I returned to Sunset Bay, the Ross’s goose was hovering in the very shallow water right by the shore. When the geese in the water went back onto land to eat grain that had been laid out for them, she went right up there with them. She didn’t seem to be afraid of people—she didn’t seek them out, but their proximity didn’t faze her. She should have been more afraid of the other geese—they kept biting at her, and she had to weave through them to get access to the grain without getting hurt too badly.

The geese migrated back into the water and swam to the land by the dock where the pelicans like to loaf. She joined them, getting up on the dirt and foraging for greens.

Juveniles are supposed to have a stripe around their eye, and she has one that is somewhat faint. So K was right: the goose probably is still a juvenile.

She is probably a migrant and will be gone tomorrow, but Q and I were pleased that we got to see a brand-new bird, for us. Such a cute one, too! 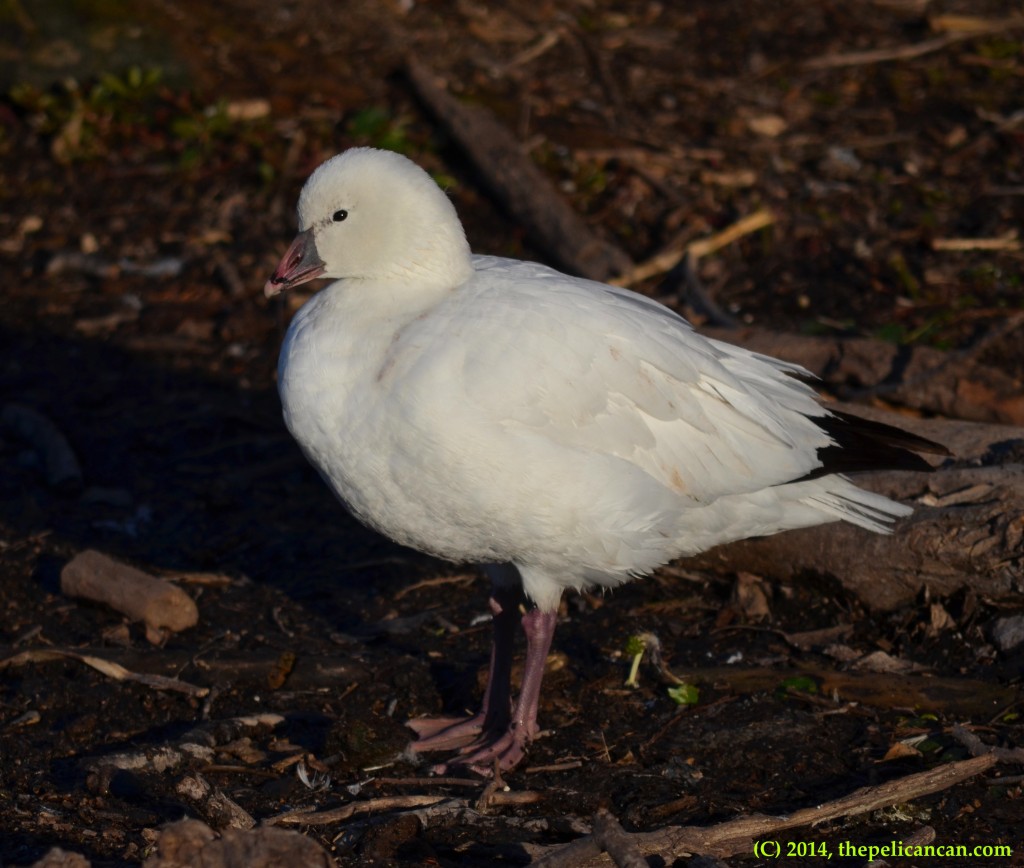