According to J R Compton, a local photographer and birder who has been watching the pelicans at White Rock Lake for several years, the earliest arrival date for a pelican is September 15. That would have been on a Monday. K, a friend whom I met while we were both watching the pelicans this past fall and winter, hoped that a pelican might come early, on the weekend, so she could have a chance to see it.

K, my significant other Q, and I were standing on the dock at Sunset Bay on Saturday afternoon, watching a snowy egret hunt. I peered out at a far-off log and said, “Wait a minute, there’s a pelican there.”

It was Pelican Ichiban, the first American White Pelican of the season at White Rock Lake.

I remembered from last fall that the first arriving pelicans tended to hang out almost exclusively on the far-away logs until more birds came. Then they shifted closer to the shore and onto the nearer logs. Thus, I wasn’t expecting much more than what we were seeing. Even with the bird so far away, we were all happy that there was finally a pelican at the lake again after six months and that we all got to see it together.

A cormorant that was sitting on the same far-away log suddenly darted toward Pelican Ichiban. The cormorant’s beak was open, and her wings were spread. Instead of Pelican Ichiban snapping at the cormorant, or just ignoring her, she freaked the fuck out. She flew up off the log and into the water.

Then she started swimming. We thought she was just going to hop up on a different far-out log, but she didn’t. She swam further in. And further. She made a nice pass swimming parallel to the dock, turned around, and swam back out to another far-off log that she hopped upon.

K saw her the next morning, the 14th, and K, Q, and I were all back out again in the afternoon. Shortly before Q and I arrived, K had watched Pelican Ichiban leave the far-off log where she had been loafing, bathe, and hop up onto a closer log. We watched her groom. And groom. And groom some more.

K said, “I forgot how long they can groom.”

I said, “Now I remember why we used to be out here for hours watching them. We had to wait that long for something to happen!”

Occasionally between grooming spells Pelican Ichiban would briefly flap her wings or scratch her neck. Once she tried scratching her gular pouch, but she seemed to lose interest and ended the session with an abbreviated gular flutter.

A snowy hopped on Pelican Ichiban’s log, but Pelican Ichiban ignored her. Later the snowy left and a great egret got on. Pelican Ichiban was still unperturbed. In fact, she was starting to get sleepy: her eyelids were drooping and occasionally closing.

The next afternoon she wasn’t there. I figured she was probably out fishing at another part of the lake. I rode my bike around the lake, but I didn’t see her. Pelican Ichiban must have paused to rest and refuel at the lake before continuing on her migration route. I was disappointed she didn’t stay but happy that I got to see her. Hopefully more pelicans will be arriving soon. 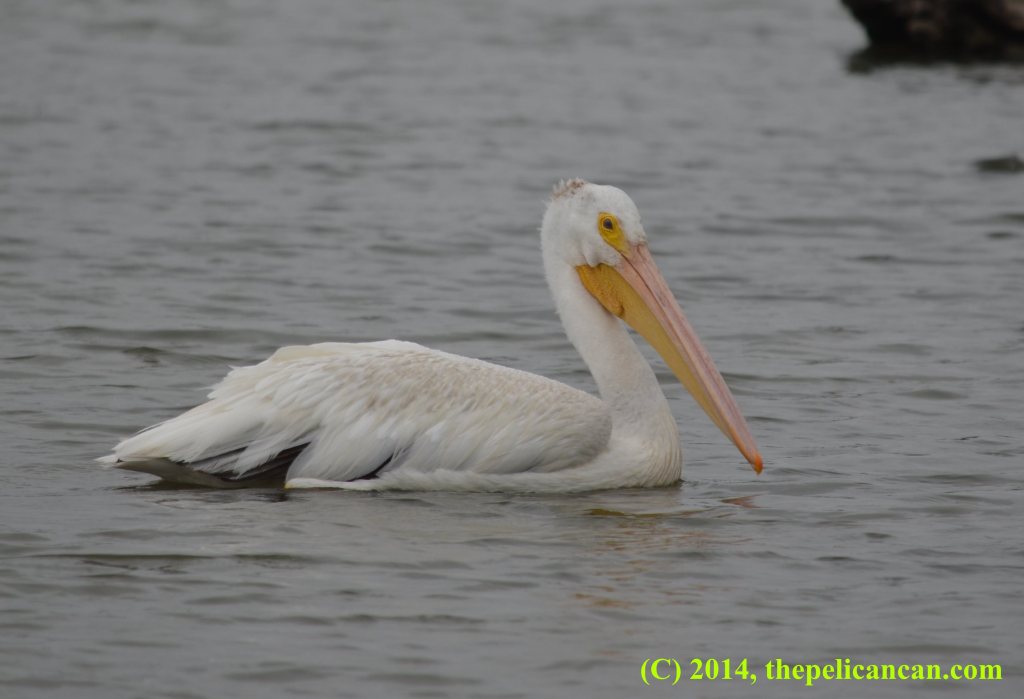 Pelican Ichiban begins her pass in front of us. 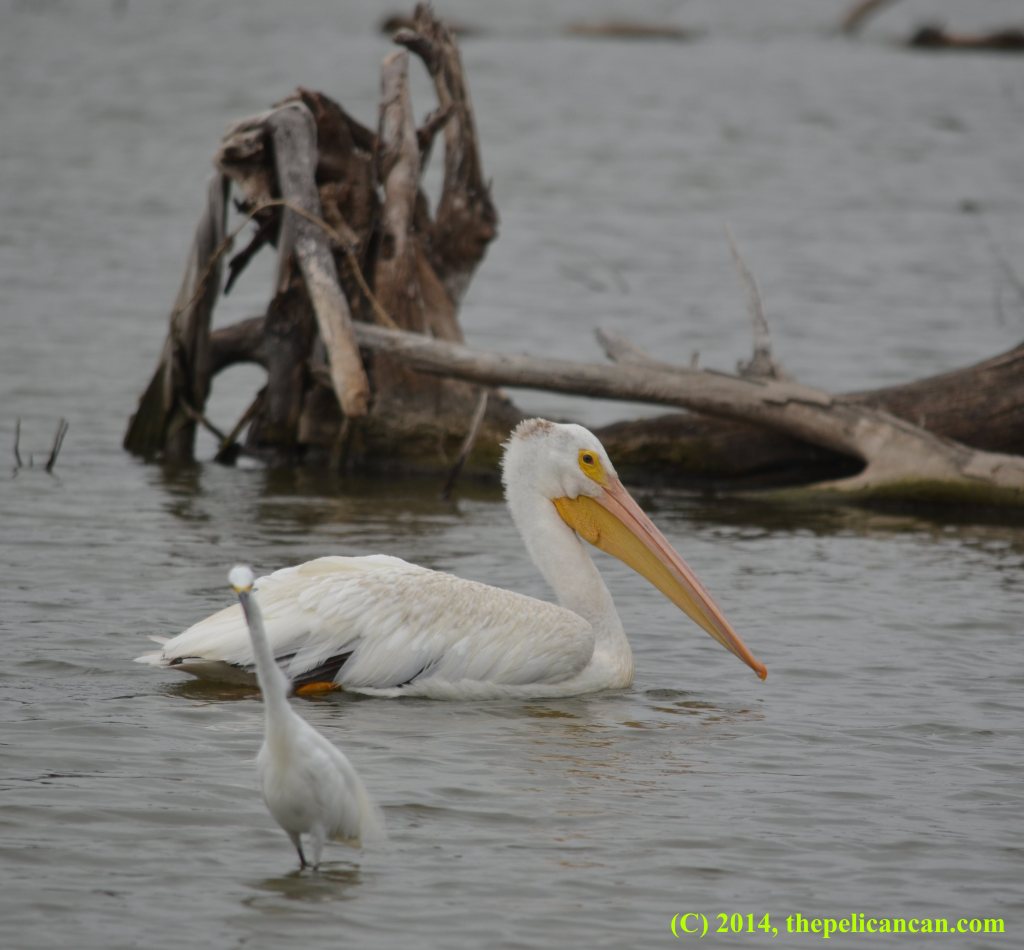 The cap of dark feathers on the back of Pelican Ichiban’s head is part of the bird’s “chick-feeding” plumage. 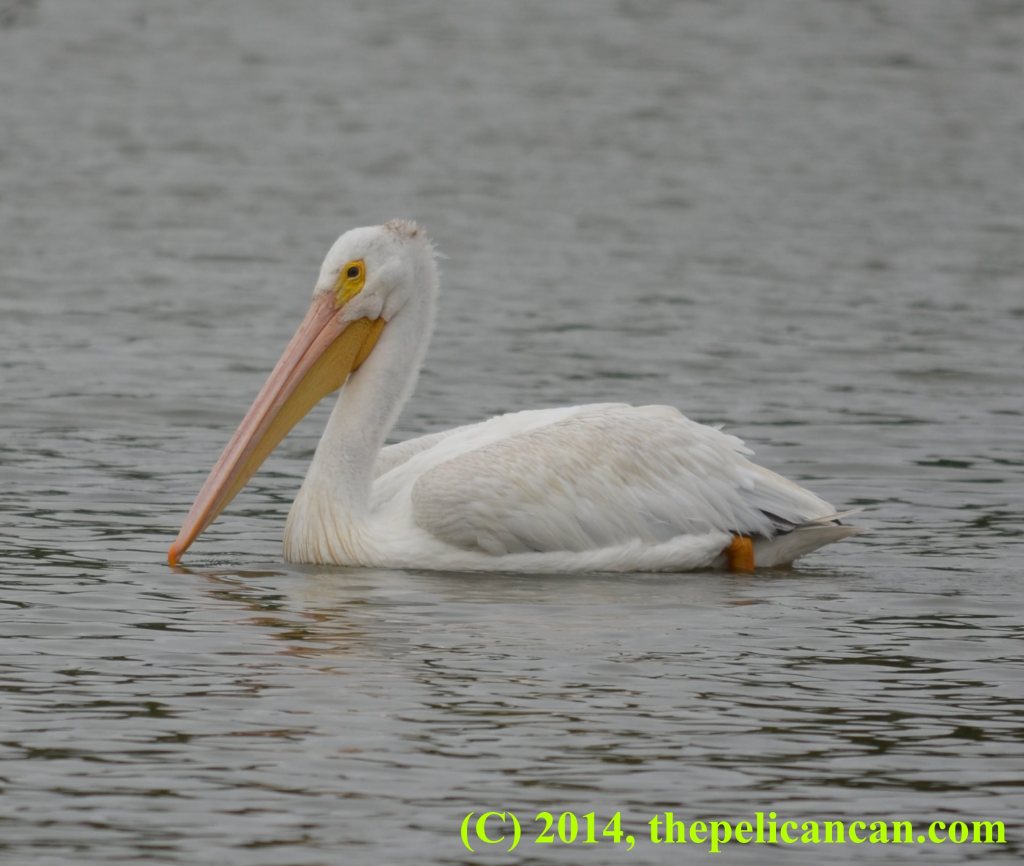 Pelican Ichiban turns to swim back out to a far-away log for loafing. 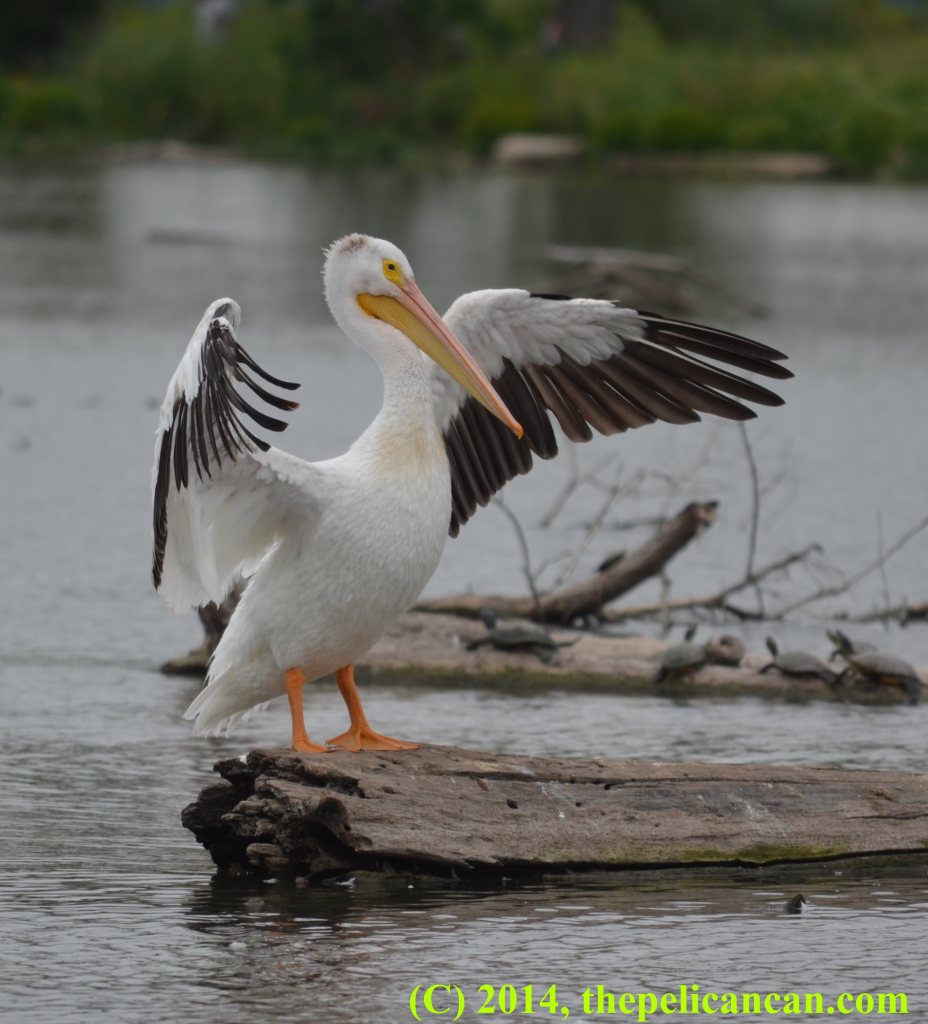 Pelican Ichiban briefly beats her wings after a grooming session. This was taken on September 14. 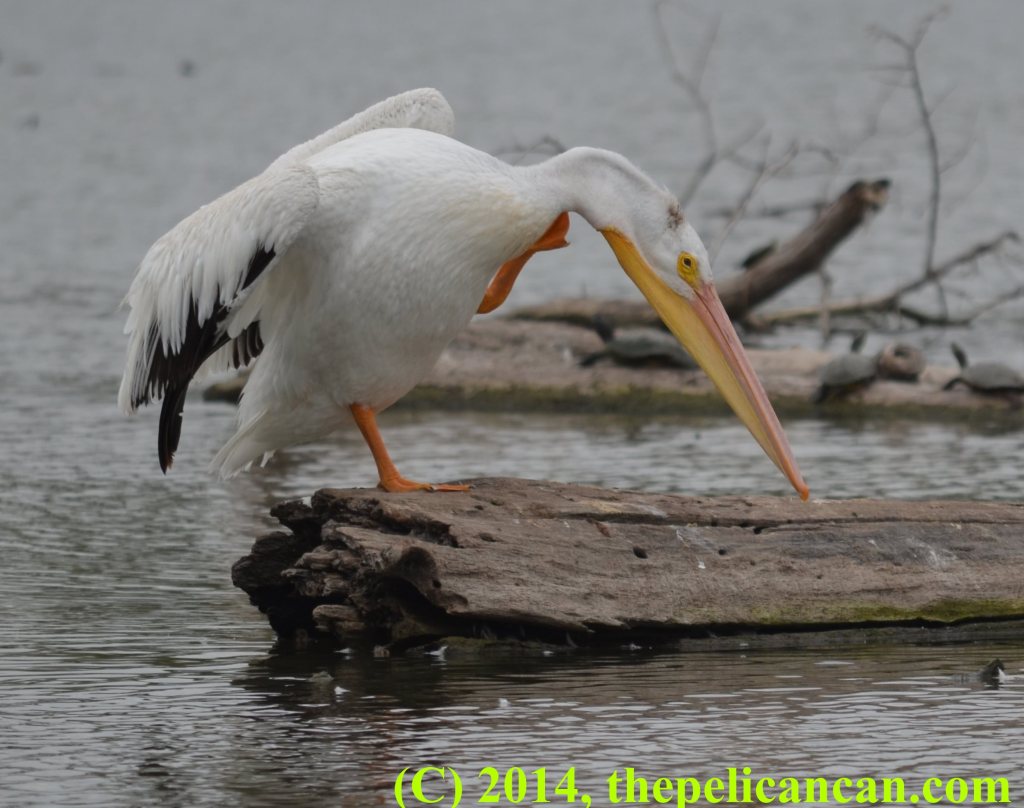 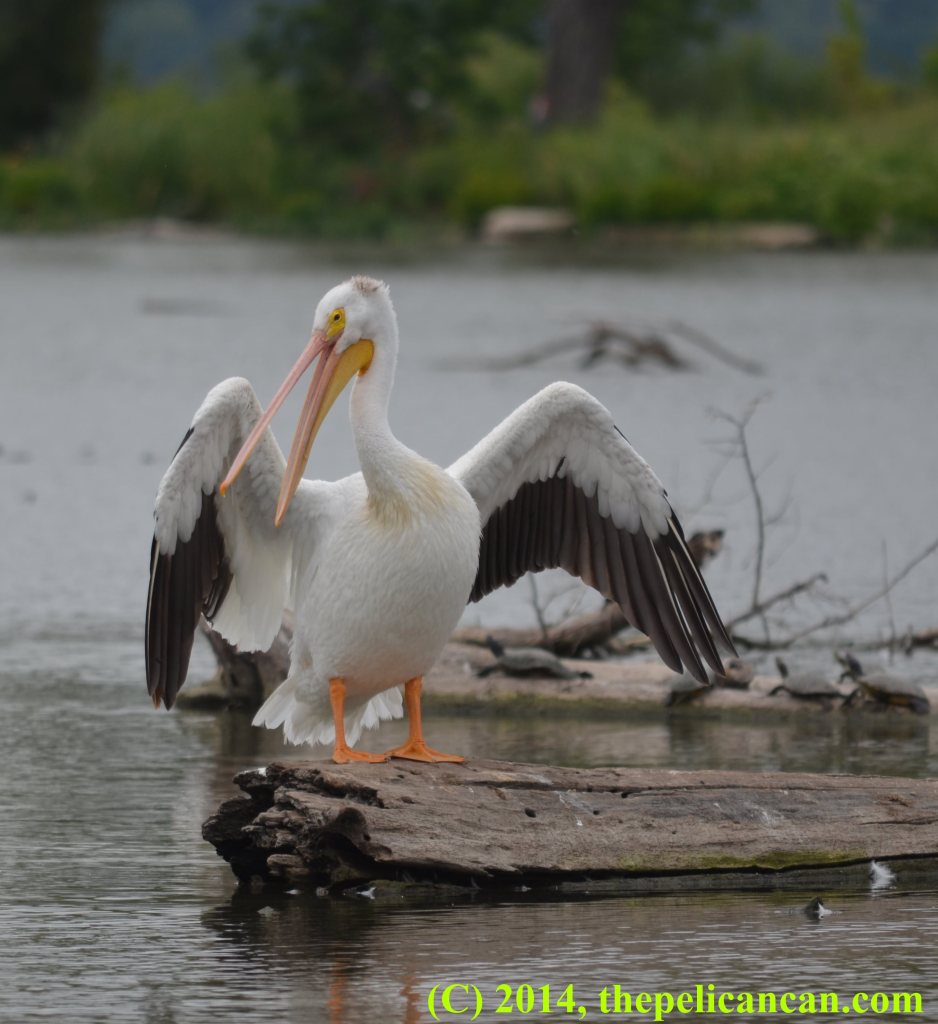 She paused for a little while with her wings held out. K and I hoped that she might do something interesting, but she just went back to grooming. 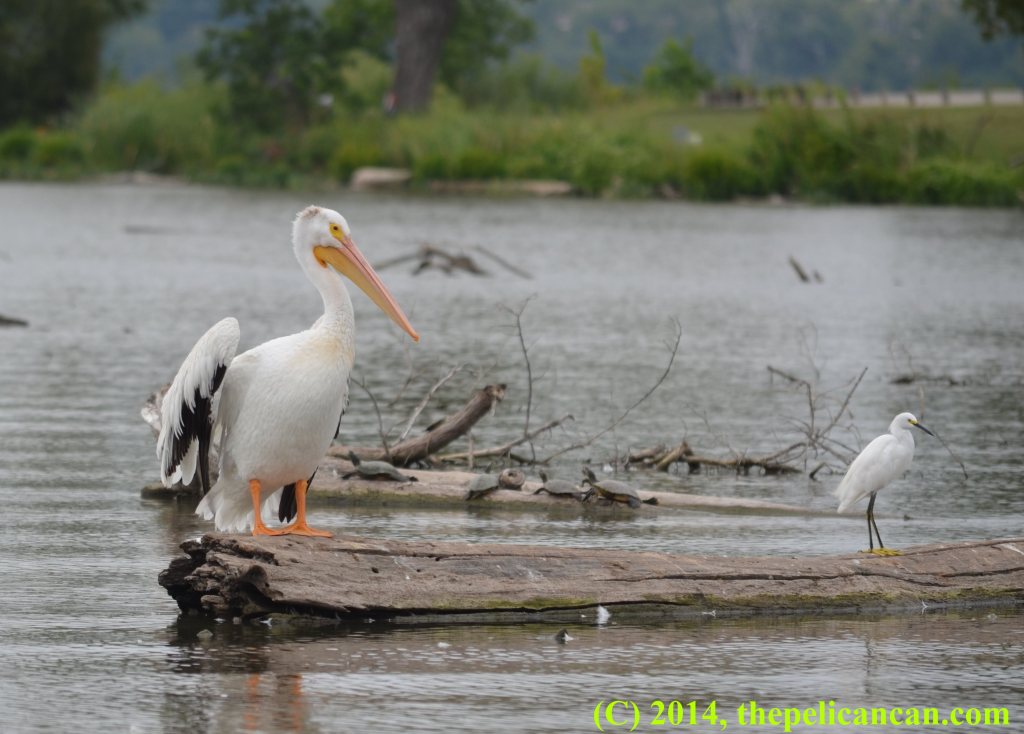 Gosh, snowy, we don’t need to save that many seats for your friends, do we? 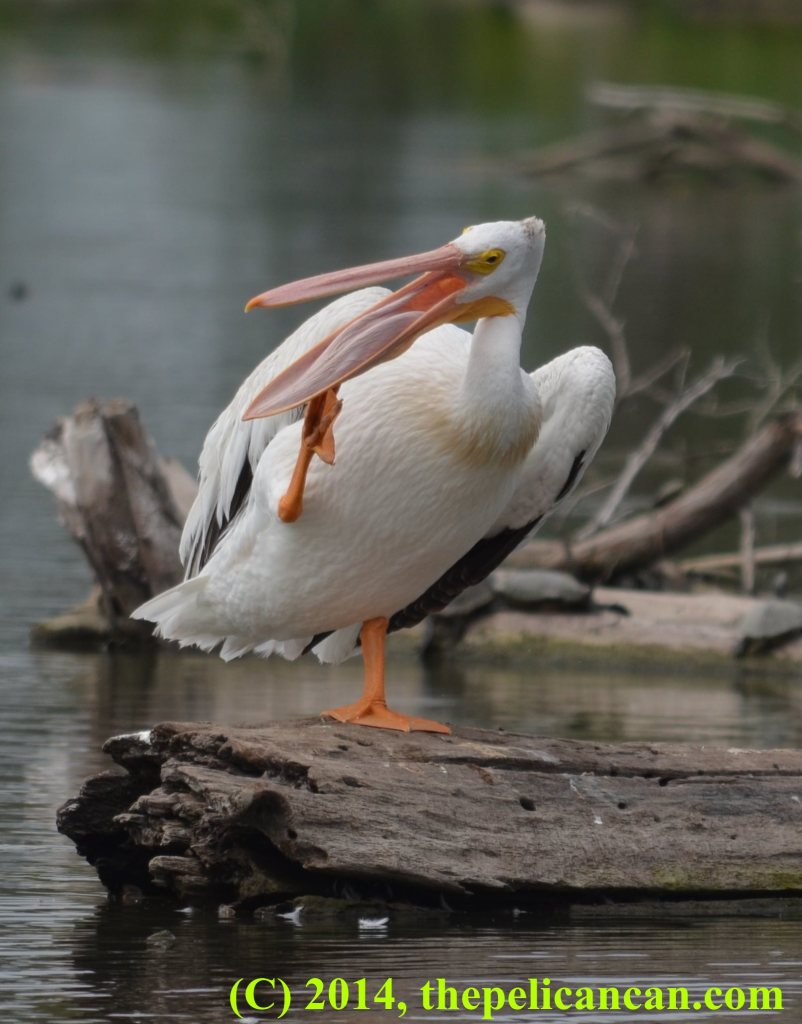 “if I had teeth I could floss. I would do it. I would be the very best.” Quotation by Twitter user birdsrightsactivist. 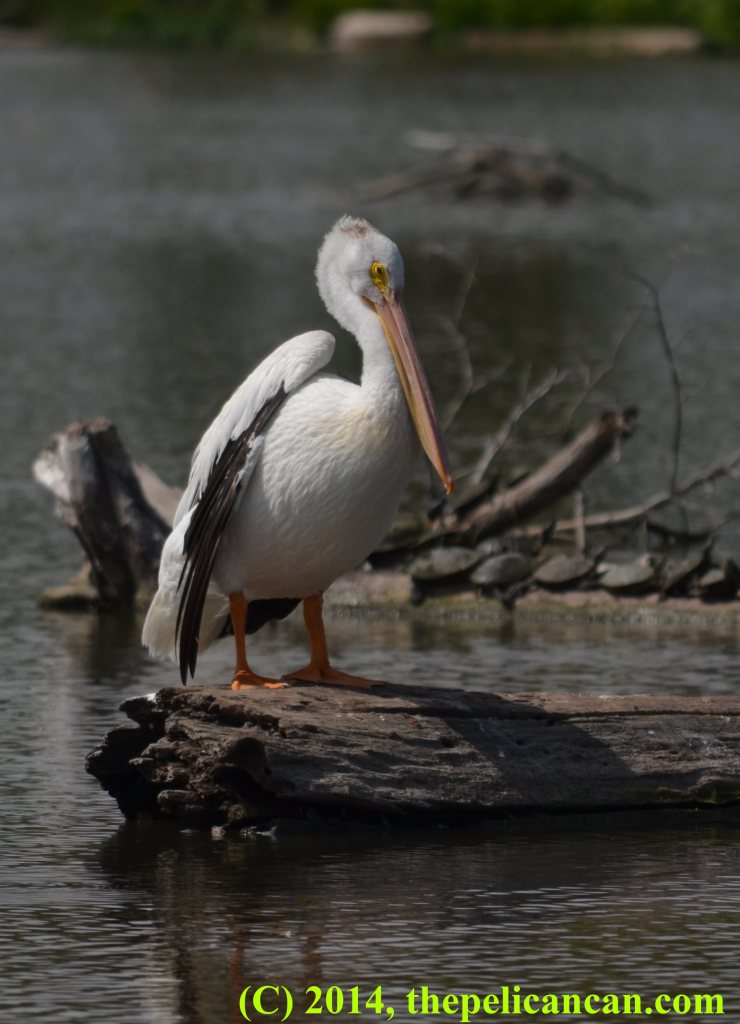