Great egrets are all over White Rock Lake. Unlike the cattle and snowy egrets, great egrets stay in North Texas all year. Although they are ubiquitous and kind of boring to me, I have a soft spot for them. I spent a lot of time this spring at the rookery at UT Southwestern, which is predominately populated by great egrets, and when I found an egret that was too young to be on the ground, I would take it to Rogers Wildlife Rehabilitation Center. That was how I learned that frightened egrets attack mammals by stabbing at their eyes. 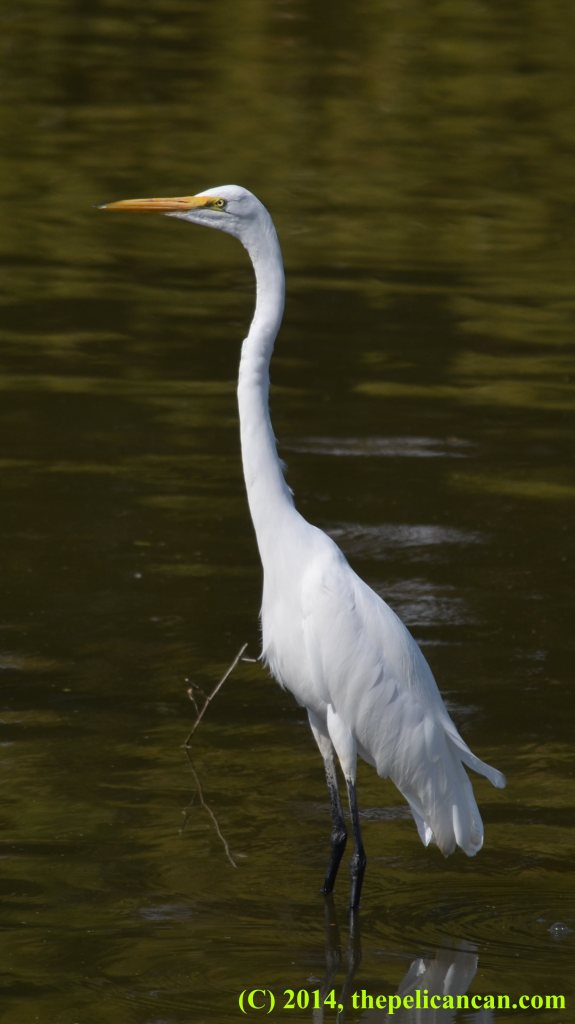 Don’t fuck with me, fellas. I’LL RIP OUT YOUR EYES.

There’s almost always a great egret hunting near the Boathouse, and lately I’ve noticed that one of them has been spending time inside the actual structure of the Boathouse. When I was there this past Tuesday, I managed to get some pics. 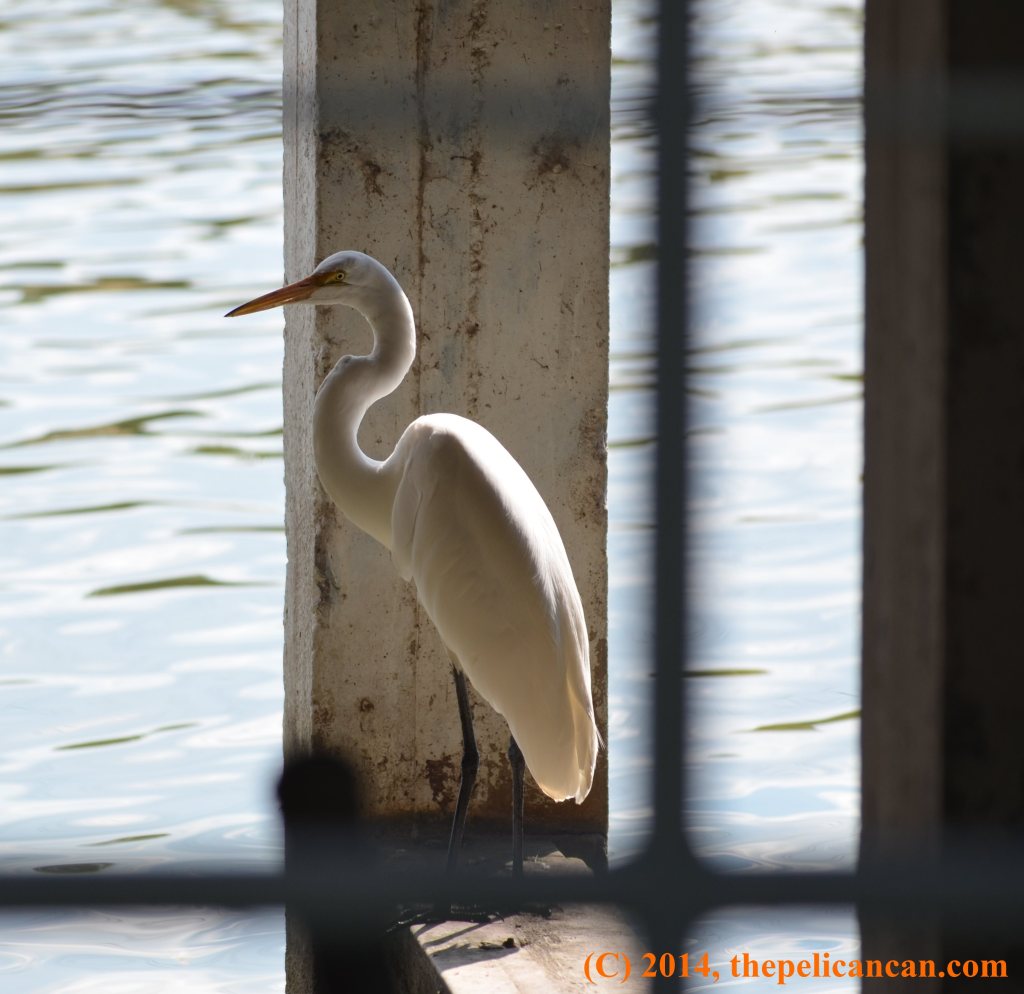 Oh, fuck. The big mammal is back.

She tried walking through the Boathouse to change positions and get rid of me. It didn’t work.

Eventually she seemed resigned to my presence. 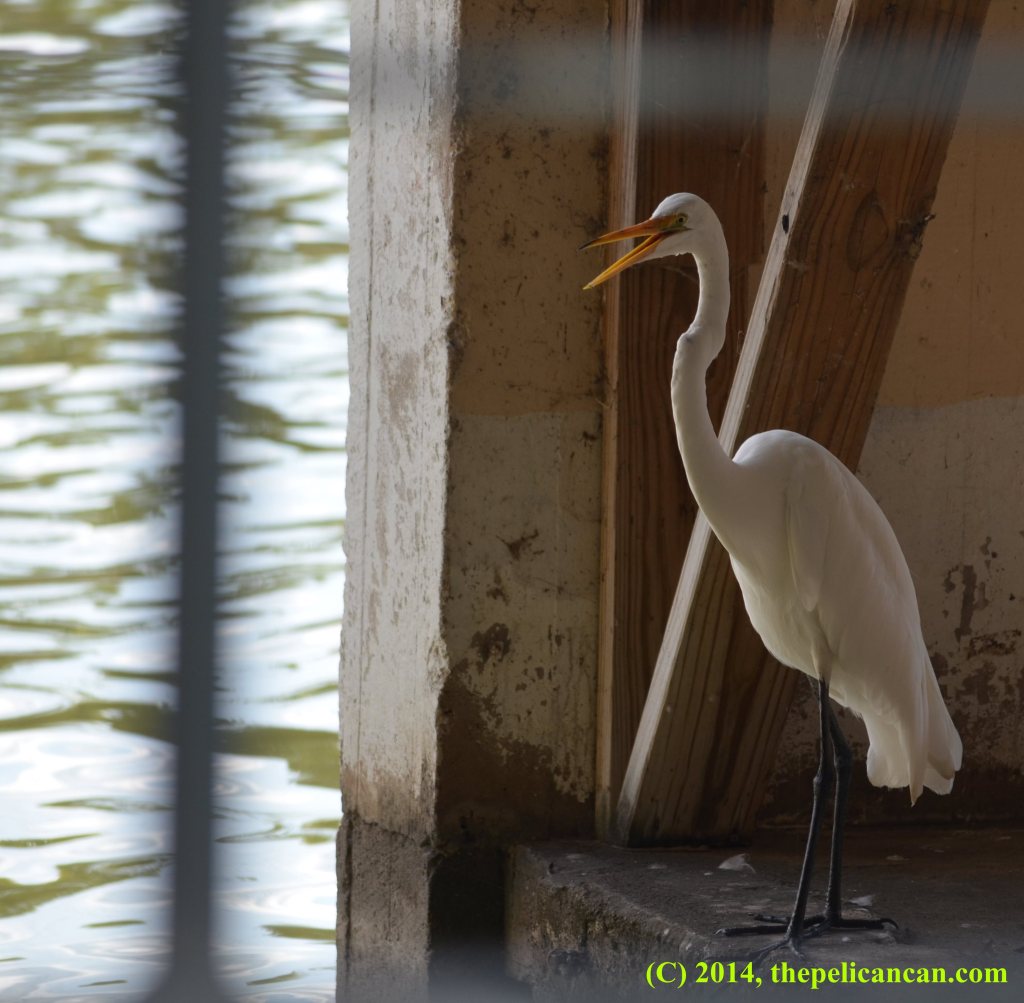 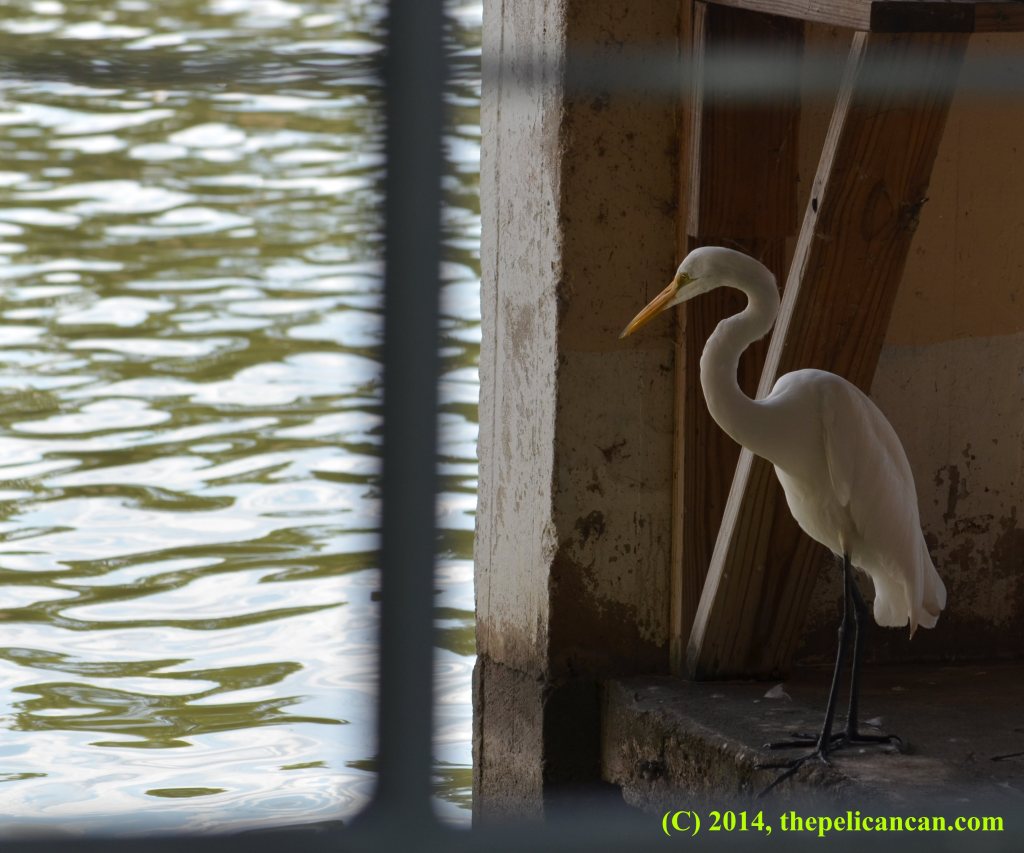 She stands in lonely solitude and surveys the sea which leads back, back to where England lies. But she, an exile, may never—

She continued to move around and even tried hunting in a few places, but her efforts were unsuccessful. 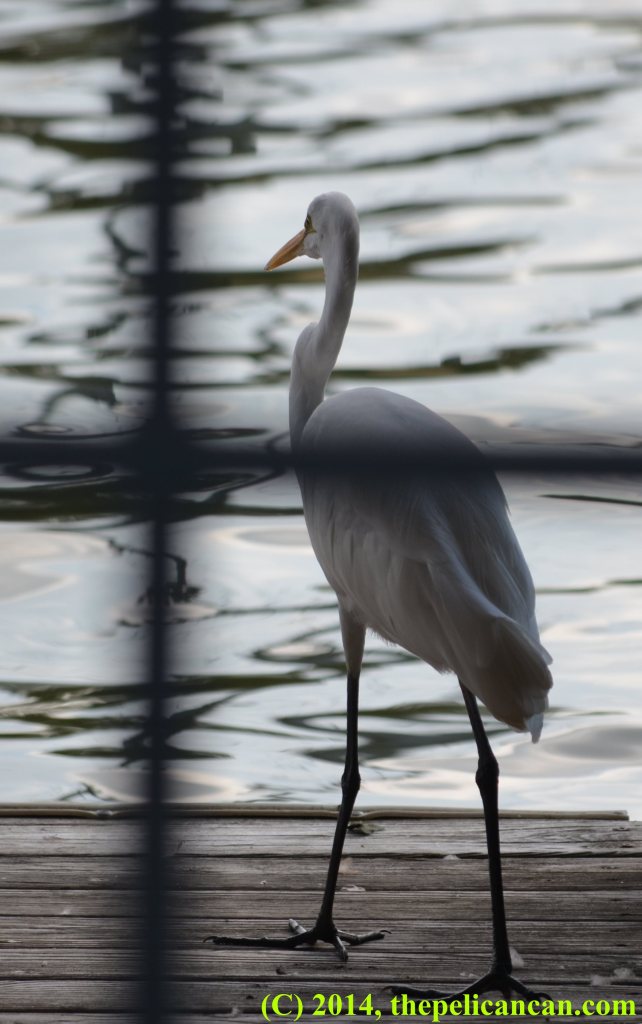 Eventually I got tired of watching the egret. It was late afternoon, and I was hot and tired and thirsty. After I crossed the bridge from the Boathouse to get to my car, I looked back and saw that she had moved to a different area inside the building. I trudged back over the bridge just in case her new position yielded anything interesting. 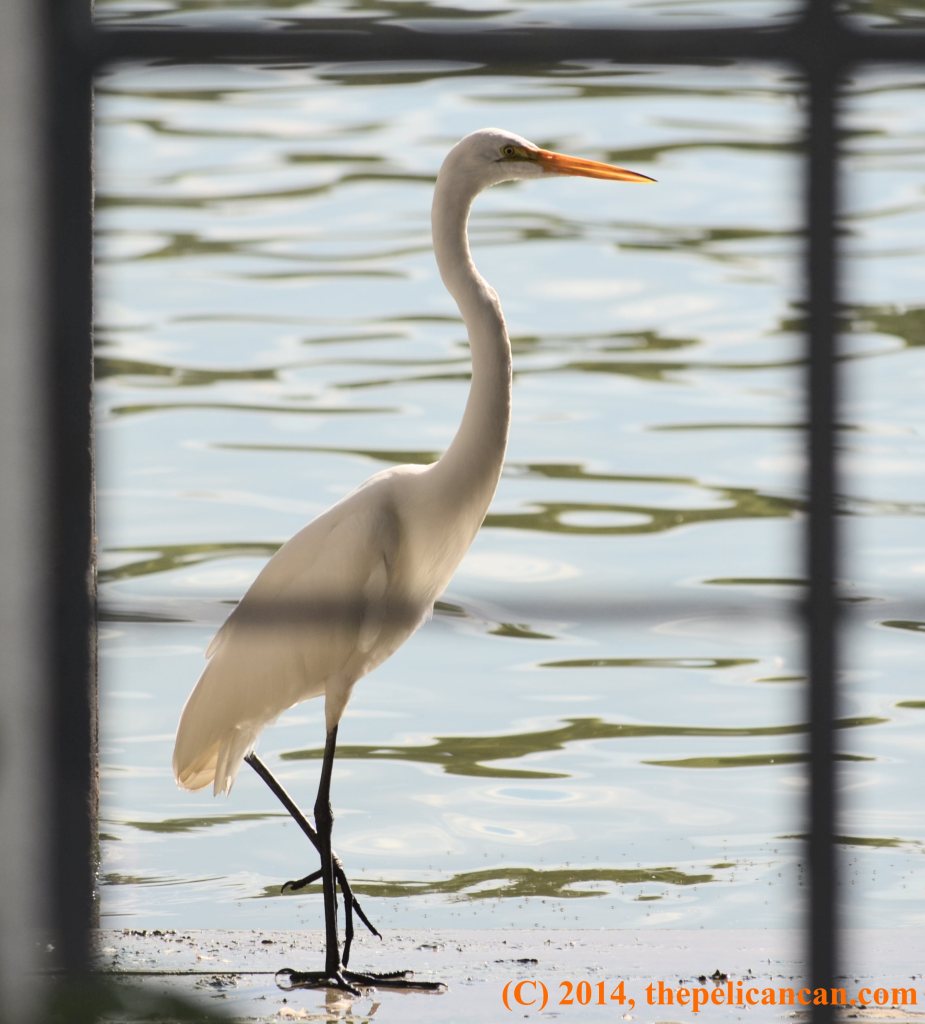 As I went to leave for the second time, I saw a male red-winged blackbird chilling in some reeds. This one stayed on his perch for quite a while. He might have been there for two whole minutes. 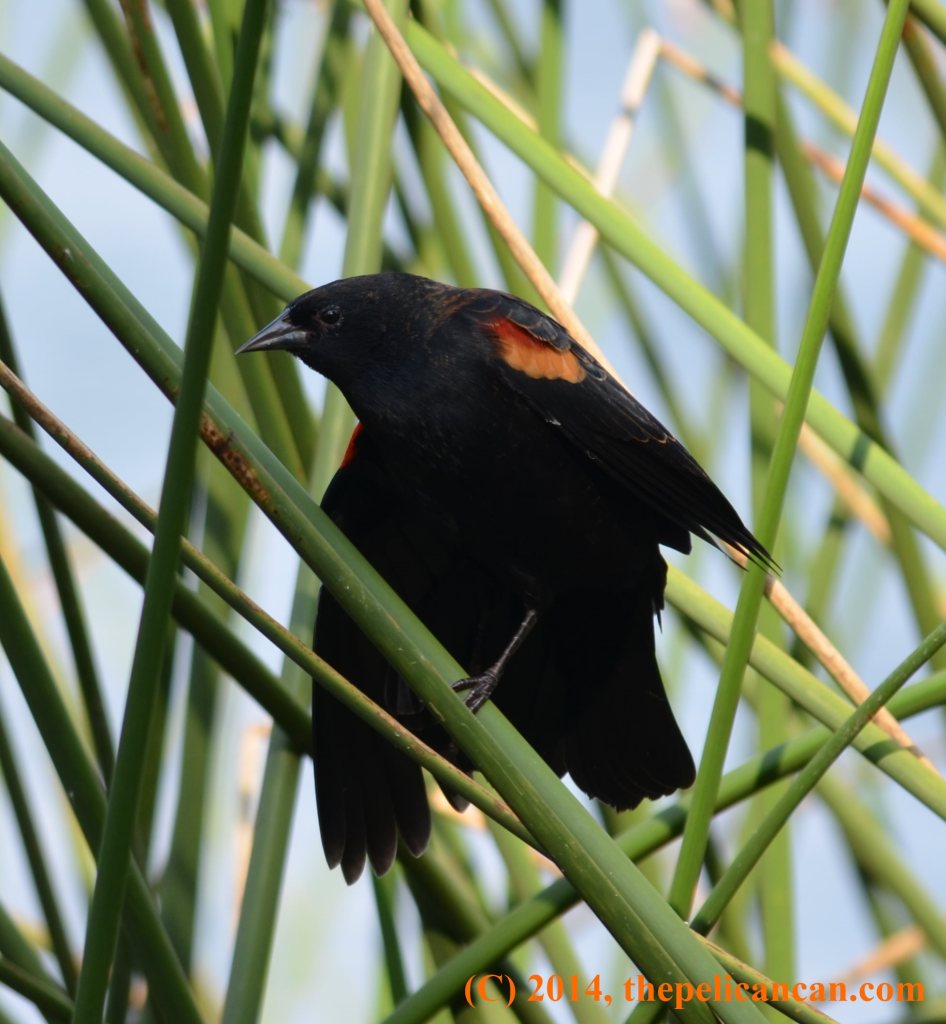 If you want my body, and you think I’m sexy, come on, birdie, let me know.

One last egret pic: when I first got to the Boathouse and was peering in the windows, I saw the egret standing in a dark portion of the building. She looked like she could be a film noir character, a hulking, indistinct figure barely stepping out of deep shadow in a dark alley, and until she speaks you’re not sure if she’s going to threaten to unzip your guts or if she will inadvertently provide you with a clue for the case you’ve been working on. 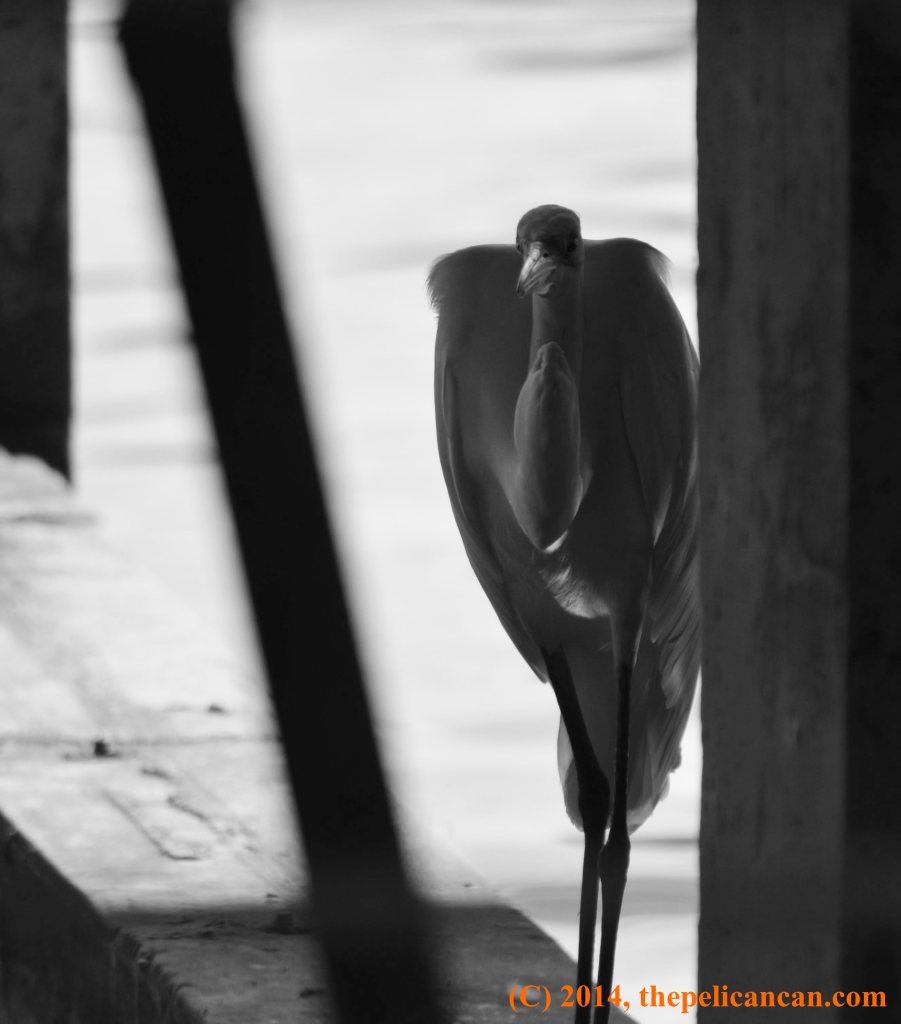 Maybe I should try to photoshop a fedora and a trenchcoat onto her.

Humans beware: she’s a loner. A rebel. And she’ll stab your eyes out if you give her the chance.