Although none of the nesting birds seemed affected by the people at the gator farm, one bird was especially nonchalant. She was a juvenile tricolored heron that was perched on a post only a couple of feet away from the main boardwalk. 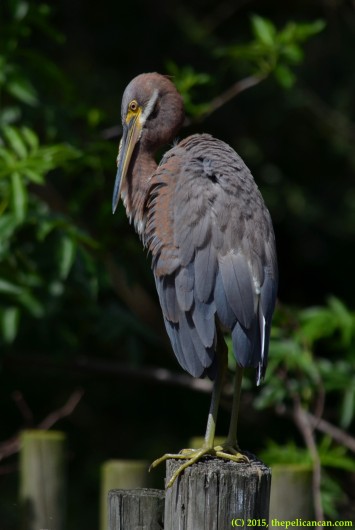 If I may speak frankly, you humans all look like ugly monsters.

The wood storks were starting to perk up and get a little more active. A few of them flew short distances to land and loaf on different trees. 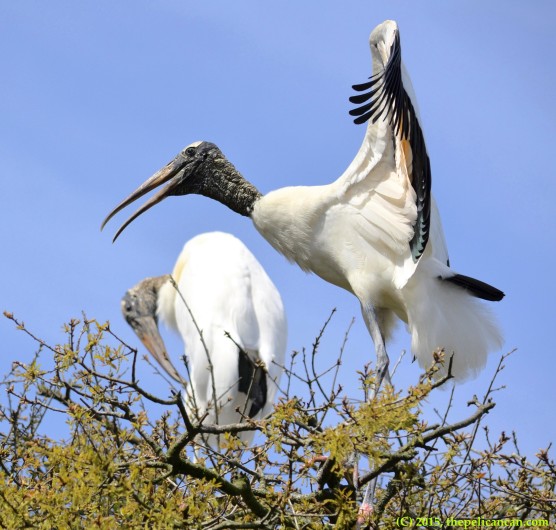 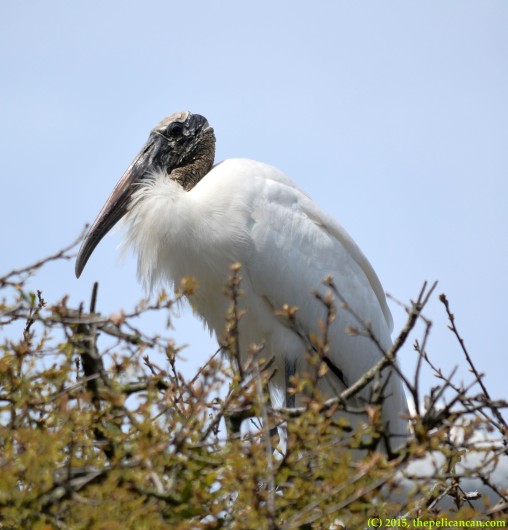 The roseate spoonbills were still mostly hanging out. 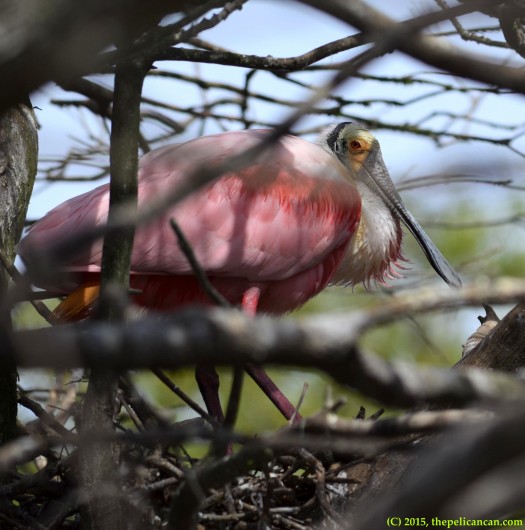 Although I don’t like birds being obscured by branches, I really like the different patterns of shadows.

This next spoonbill was clamping down on branches and shaking them furiously. I’m not sure whether he was trying to gather nesting material or if he were shaking the branches as a mating display.

Some egrets had their nests in a good-enough condition that the “on-duty” incubating bird could relax and lay on their eggs. 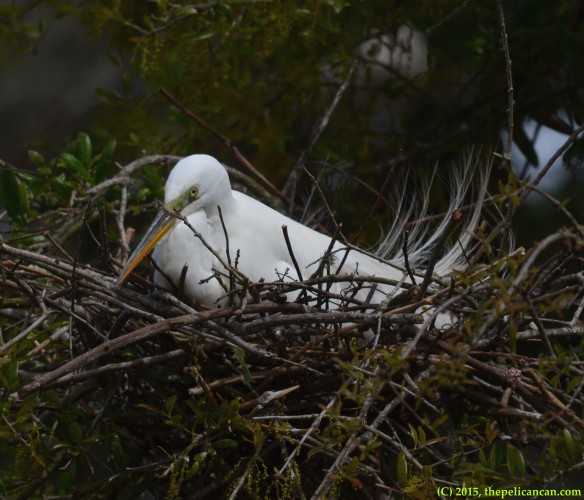 Other egrets were actively working on their nests, even though the females had already started to lay eggs. 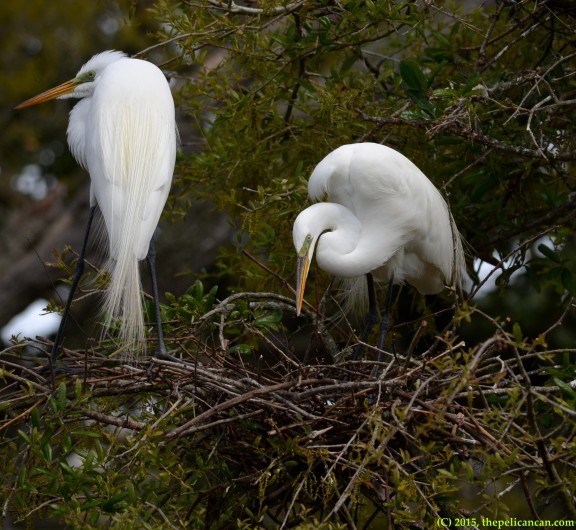 The male snowy egret was still perching on the tree where he had run off the female he mated with. 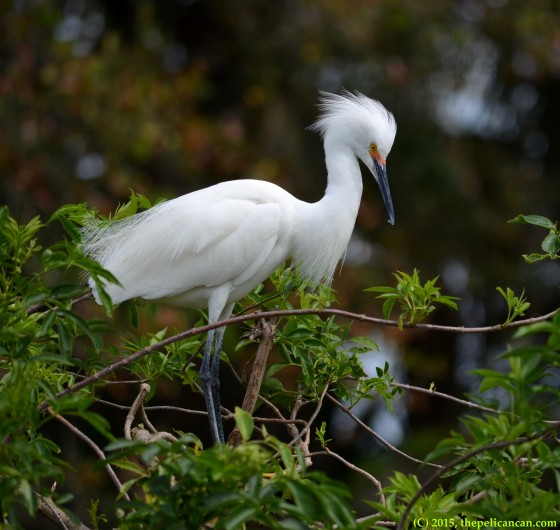 SNOWY IS TOO YOUNG TO THINK OF SETTLING DOWN AND BUILDING A NEST. SNOWY IS FUN-LOVING AND CAREFREE!

Another great egret had a beautiful green lore. 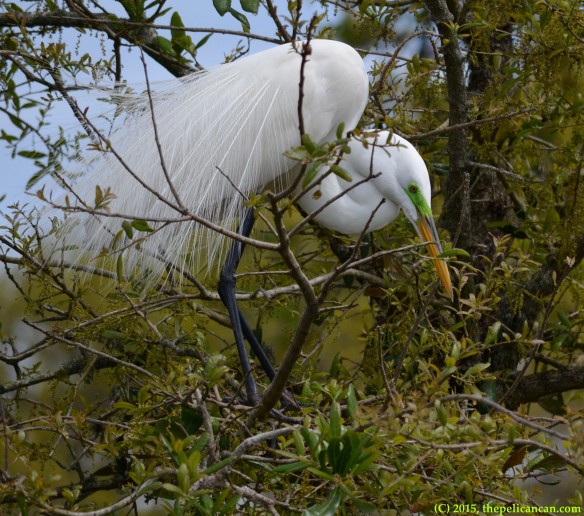 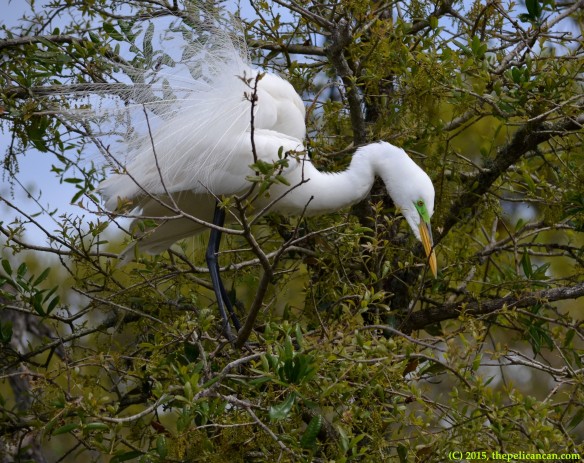 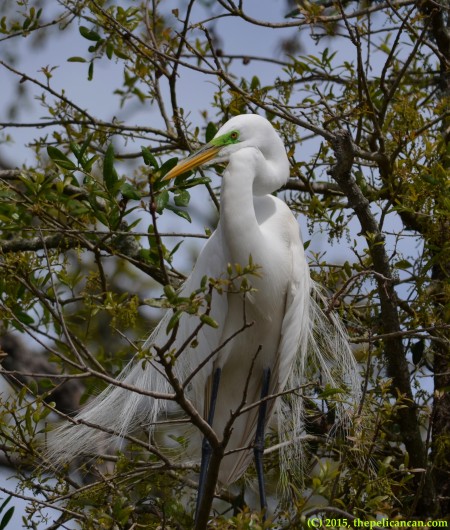 Other great egrets displayed, hung out on their nests, and looked for nesting material. 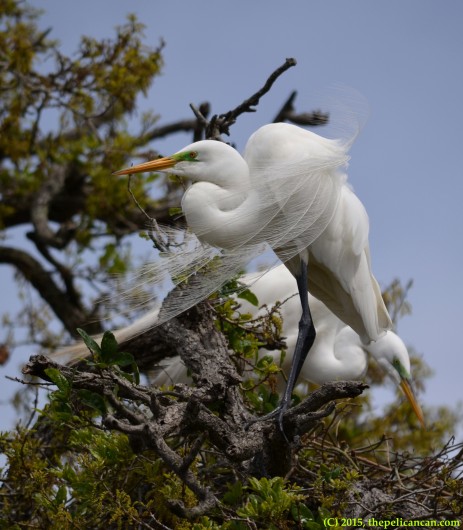 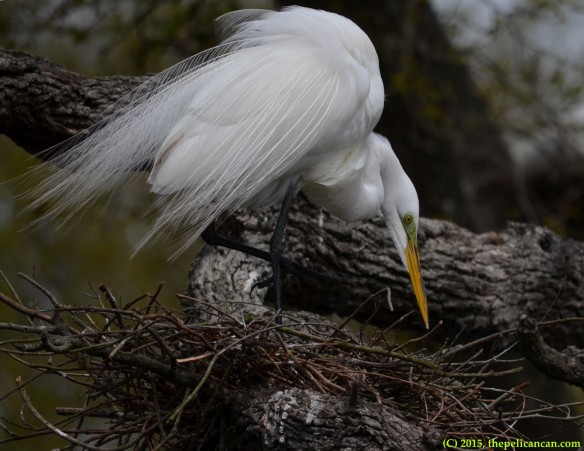 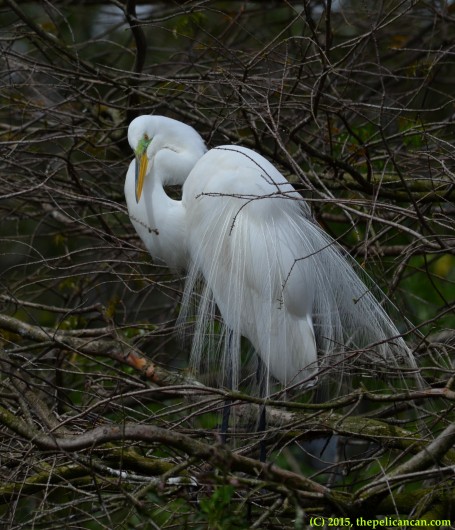 The bills of the wood storks were fascinating to see up close. I remember a project in a ceramics class in which we burnished our pieces while the clay was still moist and later fired the pieces in a pit fire. The colors and the way the light hits the stork’s beak remind me of that burnished clay after it was fired.

The juvenile tricolored heron fluttered down to the banks and stepped into the water to hunt. At one point she walked right by a gator. The gator didn’t care. 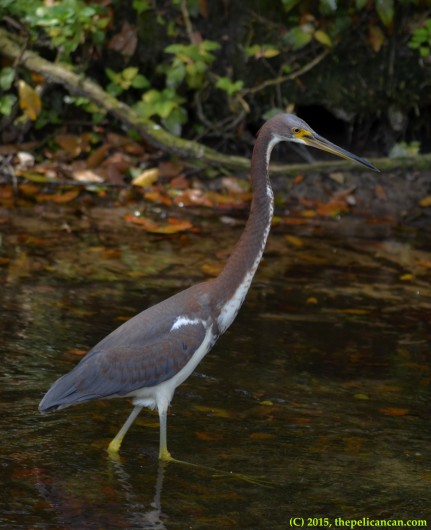 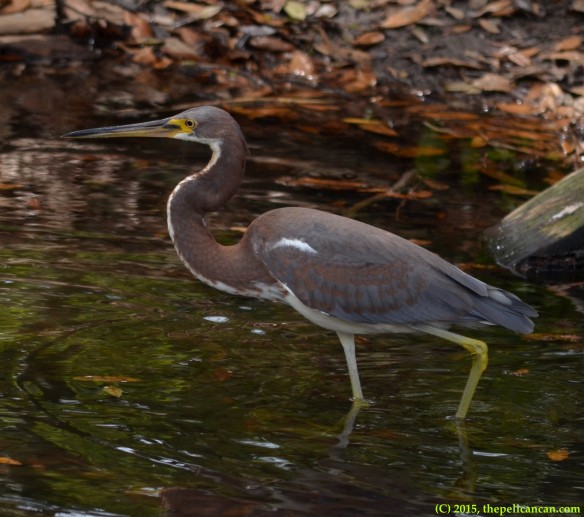 She was able to catch a few small fish, but I didn’t get any pics.

The spoonbill that had been shaking branches gave up. 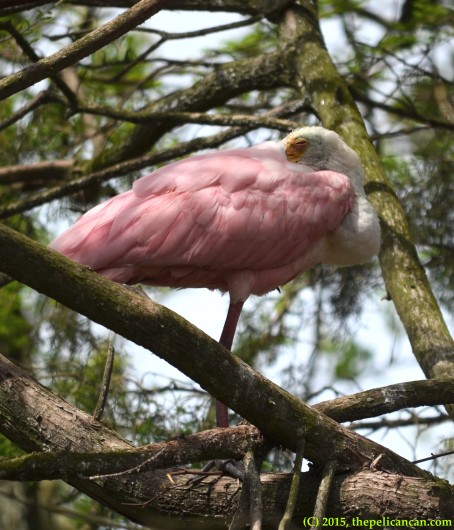 The other adult spoonbill that I’d been watching also went to sleep.

A different spoonbill was awake, although she was just lounging around while a pair of nearby snowy egrets were bleating and working on a nest. 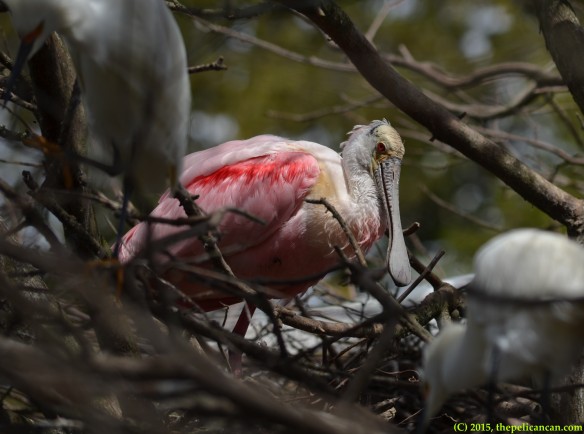 Some of the wood storks started gaping again. 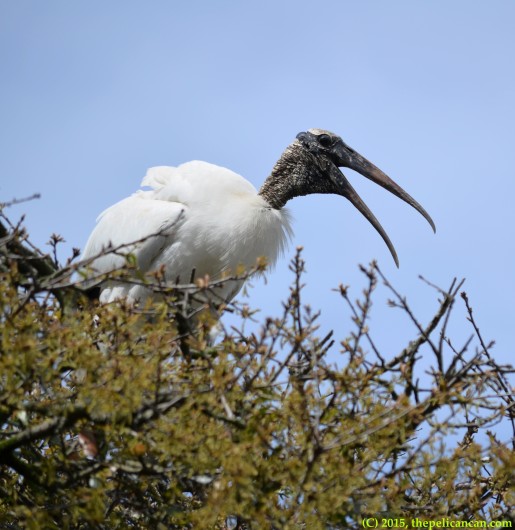 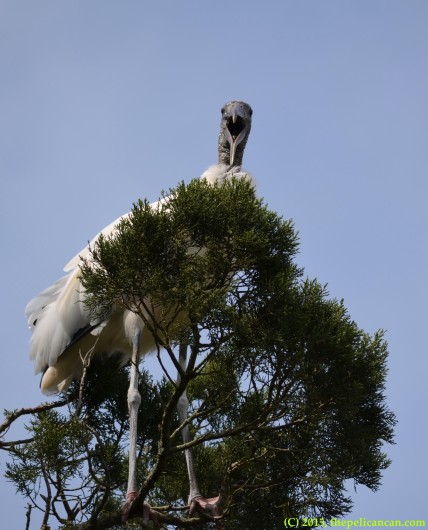 DO YOU LIKE MY HALLOWEEN COSTUME, HUMAN? I’M GOING AS A TREE.

At that point, Q and I had been at the rookery for about two hours, so we decided to go check out the other exhibits at the gator farm. 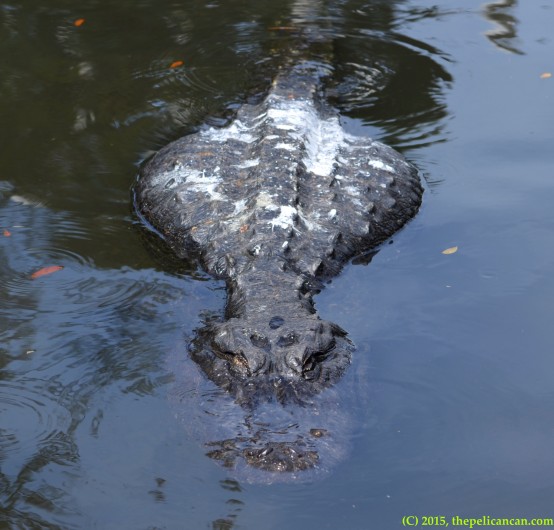 This rookery gator cracked me up because of all the bird shit on its back. It must have been hanging out in that position for a long time.

They had an African exhibit that I really liked. There was a red ruffed lemur that was dozing. 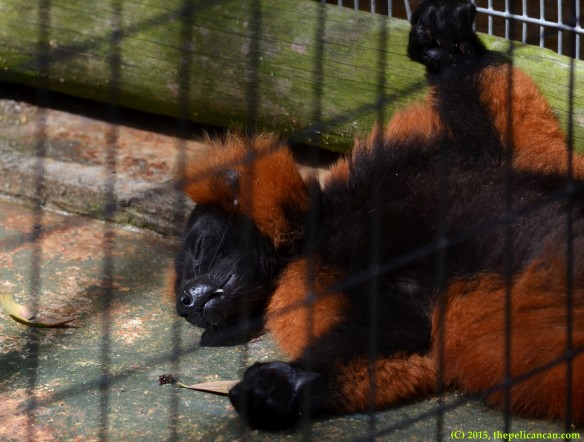 There was also a pair of marabou storks. They were awesome! I loved their long, dangling throat sacs. One of the storks preened the other for a few minutes. The preener then briefly preened herself before wandering off to get a drink of water. 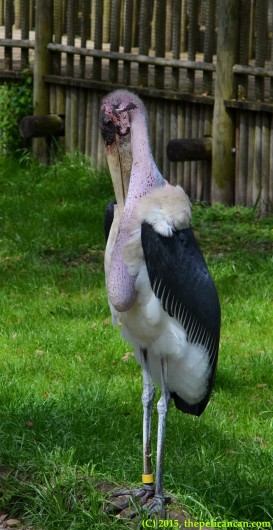 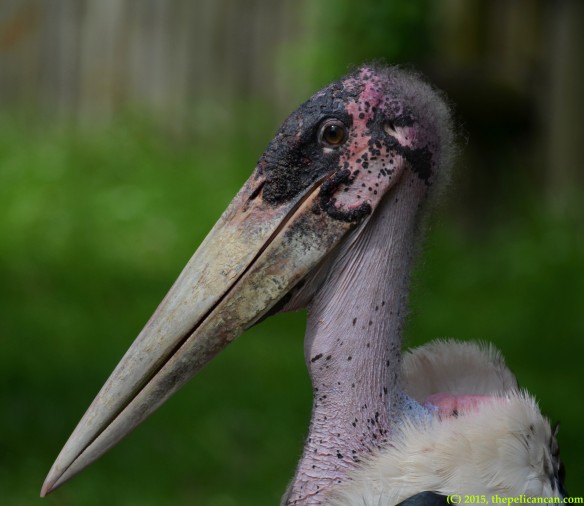 What a striking bird. 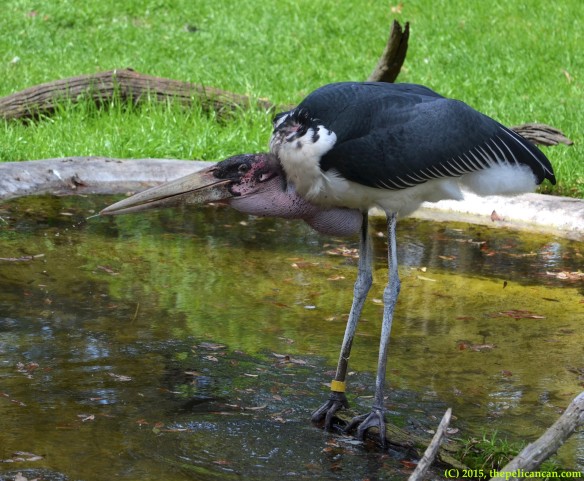 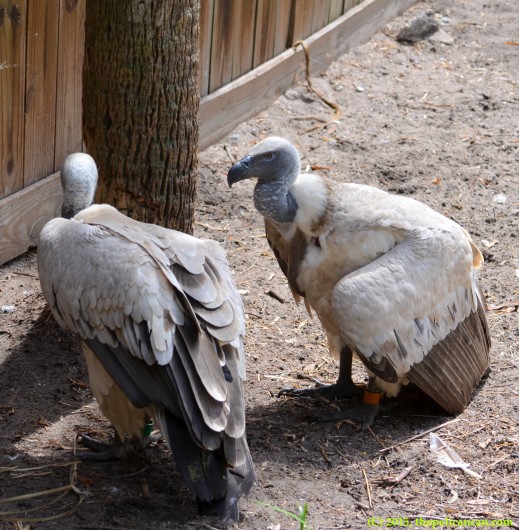 We also walked by a couple of Galapagos tortoises. 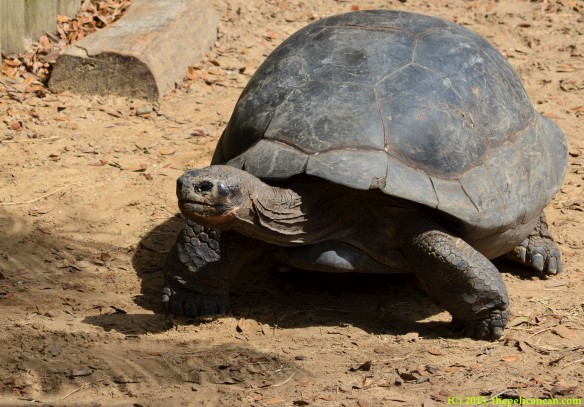 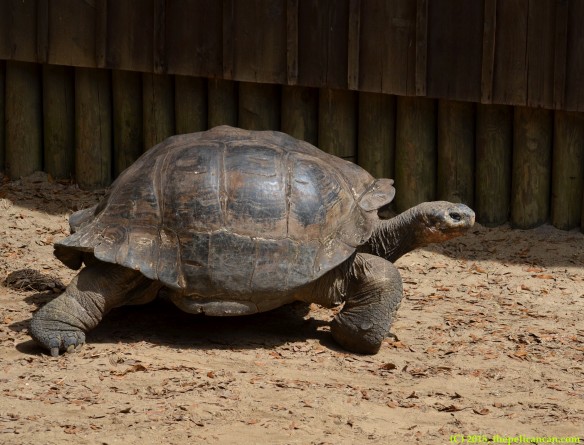 There were lots of other birds in other exhibits, although I didn’t take pics of them. I’ve never been particularly interested in alligators or crocodiles, but I was amazed by the diversity of the species they had at the gator farm.